The importance of certifications

NCRA members rate their certifications as one of the most important benefits the association offers.

When the New Hampshire legislature was considering ways to cut back in 2011, it decided to do away with a num­ber of certification boards, from cosmetol­ogy to hunting and fishing guides. Also on the chopping block was the New Hamp­shire court reporting board. The New Hampshire Court Reporters Association acted immediately, organizing a strong grassroots campaign and directly lobby­ing the New Hampshire legislators about the importance of certification for court reporters. With the advice of NCRA’s Gov­ernment Relations department, the NH­CRA was able to delay the legislation for a year while convincing the legislators that keeping the court reporting board was a benefit not only to lawyers but to the pub­lic at large and eventually defeat the meas­ure.

“We recognized the elimination of the New Hampshire Court Reporting Board as a poor way to serve the citizens of New Hampshire. The people of New Hampshire should not have to worry that their rights are being violated when they are involved in legislation because court reporters are unregulated. We were lucky in that we were able to education our leg­islators on the reasons why court reporters should be fair and impartial to everyone who needs their services,” says Megan He­fler, RDR, who chaired the NHCRA’s legis­lative committee at the time the legislation was proposed.

Twenty-six states currently have man­datory certification of court reporters, although some require only official re­porters or freelance reporters to be certi­fied. In eight other states, certification is voluntary. That the majority of states be­lieve that it is important to certify court reporters is a testament to the critical role they play in litigation and especially in the courts. As impartial record keepers, court reporters need to possess the right set of skills to fulfill their responsibilities.

“Certification, whether it’s adminis­tered through the states or through NCRA, establishes a baseline of skills so that the public can rely on court reporters both to be able to produce an accurate record and to be assured that the court reporters act in a fair and ethical way to all of the parties in litigation,” says Mary Cox-Daniel, RDR, CRR, CBC, CCP, a freelancer in Las Vegas, Nev., and chair of NCRA’s Council of the Academy of Professional Reporters.

Even in states that do not have manda­tory – or even voluntary – certification, some reporters choose to pursue certification. For some people, it’s a matter of be­ing able to differentiate services and, for others, it’s being able to be marketable no matter what the future brings. If you move from one state to another, holding a national certification, such as the RPR, can make it easier to find a new position as a freelancer or official court reporter. In fact, 22 states currently accept or use the Registered Professional Reporter (RPR) testing in place of the state certifi­cation or licensing examinations.

The benefits of certification go be­yond the individual reporter and profes­sion to the users of court reporting ser­vices. Certified practitioners must meet a minimum level of competency, follow a code of professional ethics, and abide by the rules of practice, so that judges, attor­neys, and the public know that they are paying for quality. 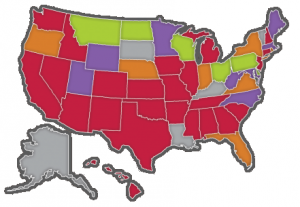 Published in Career, Certification and Features