Captioning around the world 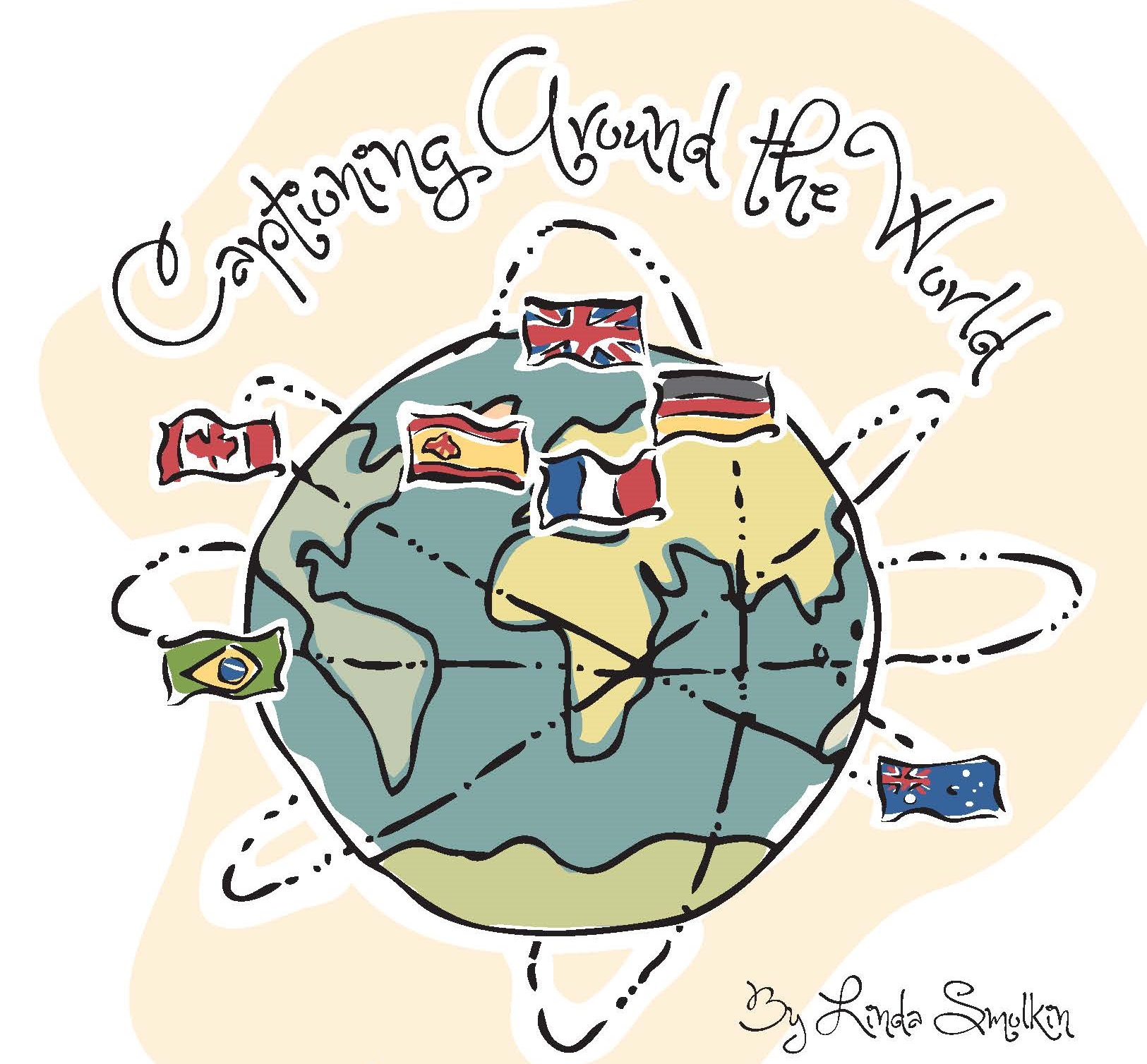 The United States might be a leader in providing captioning for television broadcast, but other countries have been offering this service for some time. Captioning has been around for many decades around the world, but it didn’t appear in the same way or offer the same types of coverage everywhere in the world. It grew rapidly in large English-speaking areas such as the United Kingdom and the United States, then made its way to other languages.

A recent white paper written by Chris Mikul of Media Access Australia shares which countries are providing captioning and the standards required. The amount of live captioning has risen, and with it, consumers and regulators are increasingly focusing on quality. Attention has been given to word speeds, accuracy rates, and acceptable time lag. In addition, a number of models have been developed to measure caption accuracy, with the most recent being the NER Model.

Here, we take a closer look at some of the countries offering captioning, other than the United States.

Captioning requirements for broadcasters are set in Ofcom’s Code on Television Access Services. The code sets quotas for captioning and recommendations for best practices. In 2013, Ofcom launched a two-year initiative, requiring broadcasters to provide accuracy measurements for sample live-captioned programs. The average speed of captioning, the average range of lag times, and the number and type of errors are measured. Ofcom has chosen the NER Model as the method broadcasters should use to measure caption quality.

BBC follows online editorial guidelines published in 2009, which have instructions, even specifics on how the language should be written or reduced in captions. Mikul’s white paper provides an excerpt from the guideline: “Since people generally speak much faster than the text of their speech can be read, it is almost always necessary to edit the speech.” The word speed for pre-recorded programs, it continues, “should not normally exceed 140 words per minute,” although a higher rate of 180 wpm is permitted “in exceptional circumstances.”

In 2007, the Canadian Radio-Television and Communications Commission brought about a policy that all programs, not including promotions and commercials, had to be captioned and instructed the Canadian Association of Broadcasters to establish working groups for English and French languages. After drafts were released for public opinion, French language and English-language policies were adopted in December 2011 and in July 2012, respectively.

The standards for captions on French television are in the Charte relative à la qualité du sous-titrage à destination des personnes sourdes ou malentendantes (‘Charter relating to the quality of subtitling addressed to the deaf or hard of hearing’). This document was released by France’s audiovisual regulator, the Conseil supérieur de l’audiovisuel, in December 2011.

Color standards are part of the requirements. These include: white for speakers visible on the screen and yellow for speakers not on the screen; red for sound effects; magenta for music and lyrics; cyan for thoughts of a character, narrator, or voice over; and green for people speaking a foreign language. Due to these color-standard requirements, speakers are identified by caption positioning or by dashes to indicate new speakers.

Spanish captioning standards are outlines in Subtitulado para personas sordas y personas con discapacidad auditiva (‘Subtitling for the deaf and hearing impaired’) issued by AENOR, the Spanish Association of Standardization and Certification. The document mentions the maximum speed for captions for pre-recorded programs should be 15 characters per second. The average length of Spanish words is approximately 5.2 characters (slightly longer than English words at five characters) and works out to about 173 wpm.

The document also sets standards for identifying speakers, sound effects, coloring, and positioning, which are similar to United Kingdom and Australian standards. The white paper doesn’t detail what Spain’s standards are for live captioning. 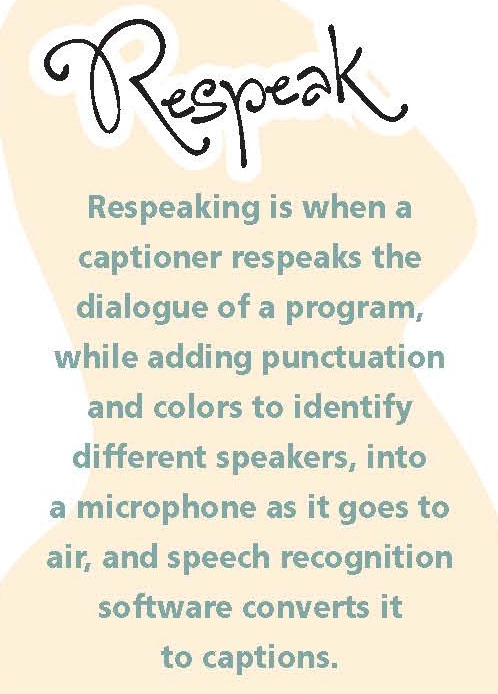 The Australian Caption Centre developed their standards using existing U.S. and U.K. standards as guidelines. ACC initially captioned adult programs at 120 wpm and children’s programs at 90 wpm or 60 wpm. After consulting with consumer-representative groups and showing TV viewers excerpts of programs captioned at different speeds, the maximum speed for adult programs was increased to 180 wpm and for children’s programs to 120 wpm.

Amendments to the Broadcasting Services Act passed in 1999 made captioning a requirement for all stations broadcasting digitally effective January 1, 2001. Then, in 2012, amendments to the Act gave the Australian Communications and Media Authority the power to determine standards that relate to captioning services by commercial television licensees, national broadcasters, and subscription television licensees. Some consumer advocates argued for metrics to be included in the standards, but agreement couldn’t be reached on an appropriate model for measuring errors. In the end, the ACMA decided not to include metrics. Instead, ACMA focused on readability, comprehensibility, and accuracy when receiving caption complaints from the public.

Steno do Brasil, Ltda, a captioning company headquartered in São Paulo, worked with the Brazilian authorities to come up with standards for captioning and wound up adopting standards used in the United States. Most of their captions are in upper and lower case, because modems have a tough time with accented upper case vowels in Portuguese.

Brazil’s federal government passed an act similar to the Americans with Disabilities Act. When first introduced, the law required an increasing percentage of programs to be captioned over a five-year period. Several changes have been introduced and now Internet streaming, cable programs, and in some cases, Intranet programs must be captioned in Portuguese. Quality must be 98.5 percent or above for realtime. Some broadcasters embraced captioning as a way to reach an under-served sector of the population, but the majority tried to ignore the law. After some time, the deaf community organized and began putting pressure on broadcasters and bringing complaints to the government to make captioning universal.

It was also discovered that dialects of sign language throughout the country are different, so no single standard language was available. The data supplied by the deaf community to the regulators at the time showed the percentages of understanding lip reading and sign language to be significantly less than closed captioning. Therefore, live stenotypists are the preferred method of creating real-time captions.

In most of these countries, focuses of quality issues remain mostly with programs captioned live, mostly due to the limited ability to correct errors as they occur. Communications between regulators and broadcasters help with understanding how content is produced and delivered across a range of platforms.

There seems to be a trend to be more universal in standards, due to the international presence of companies and their clients. This not only helps in terms of cost effectiveness, but in delivering access to captioning.

The JCR would also like to thank Randy Czerenda, co-owner of Steno do Brasil, Ltda, who contributed to this article.