There is a perfect storm of opportunity brewing for the stenographic court reporting profession. A brand-new report issued by independent researchers definitively highlights that court reporters and captioners are in demand, both now and even more so in the future; expensive four-year degrees don’t hold up in the marketplace as well as they did just a few short years ago; and today’s emerging workforce is seeking high-tech fields that offer flexibility both in the eventual work environments and the educational path necessary to become qualified to work in such fields.

At the heart of its strategic plan, the National Court Reporters Association aims to get more students into and more qualified court reporters out of court reporting programs. To combat societal rumblings that the stenographic court reporting profession is on the decline, the Association commissioned an independently produced marketplace analysis, the 2013-14 Industry Outlook Report. More details on the report, developed by experienced researchers at Ducker Worldwide, will be explored in the next issue of the JCR, but, in a nutshell, the research not only defines the current state of supply and demand for the court reporting profession, but also provides a five-year outlook for the profession—and the forecast is very favorable for those considering stenographic court reporting as a career option.

Given several market factors, Ducker is projecting a pending surge in job opportunities within the court reporting industry. According to the forecast, more than 5,500 new stenographic court reporting and captioning jobs are anticipated across the United States by 2018. Researchers predict that the states with the greatest demand will include California, Texas, Illinois, and New York. While the demand and supply are currently in balance, with some limited regional shortages and surpluses across the country, a handful of marketplace drivers will cause demand for court reporters to exceed supply within five years. Some of the factors that come into play in the predictions will be the continued preference for court reporters in the legal arena, even as the industry undergoes transition, new technologies that will assist court reporters in bringing additional value to the marketplace, and an increased demand for captioning services.

While these facts present an appealing sense of job security for the next generation of stenographic court reporters, it also presents a challenge for the profession: The current student enrollment rates simply won’t be able to meet the upcoming job demand. With new technologies and emerging competition on the horizon, it is critical that NCRA, in partnership with accredited court reporting programs across the country, work together to proactively increase enrollment across the board. With data in hand and armed with messages that tout the benefits of the long standing profession, NCRA leaders plan to have the public “take note” of what stenographic court reporting has to offer.

SHOUTING FROM THE ROOFTOPS

Given the magnitude of what a national publicity campaign can entail, NCRA has partnered with BowStern, an experienced marketing and public relations firm with national accolades, to develop a campaign informing potential students and media partners about the benefits of a career in court reporting. With BowStern’s support, this effort — known as the Take Note campaign — was rolled out to the NCRA membership at the Association’s 2014 Convention & Expo in San Francisco ahead of the external nationwide launch in early September. The goal for the comprehensive, coordinated effort is to highlight to the media and the public that court reporting and captioning profession has a story that demands attention.

The Take Note campaign not only playfully suggests the role and responsibilities of a court reporter but calls interested students to take notice of the career benefits. By focusing on the opportunities plainly highlighted in the Industry Outlook Report, NCRA and its industry partners hope to solidify stenographic court reporting as a viable career choice for a multitude of students —those who might have tried but not found success in a traditional college setting, middle and high school students, those who aim to re-enter the workforce, and others — in the coming generations.

Specifically, the Take Note campaign will showcase several key career characteristics: job security, earning potential, flexibility of schedule, and the ability to help others. This broad effort will include a combination of public relations outreach, paid media advertising, guerrilla marketing events, and a custom website (crTakeNote.com). Each laser- focused element will encourage potential students and influencers such as parents and school counselors to connect directly with NCRA’s certified and participating court reporting schools and programs.

NCRA is putting its money where its mouth is with the Take Note campaign, offering certified schools and programs a financial incentive to promote the materials specific to the campaign. With the goal of putting a unified message into the marketplace, Take Note materials are available in template form so programs can customize the materials and use them in marketing vehicles that are proven successful in their local student prospect pool. The campaign will succeed thanks to a true team effort — NCRA will promote Take Note materials on a nationwide scale, and certified programs have the option to promote the campaign on a local level with the support of partial financial reimbursement. 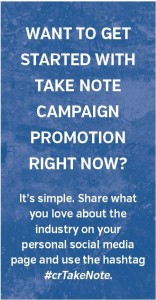 TAKE NOTE: YOU CAN HELP

The campaign also includes a grassroots component thanks to tools and marketing materials that arm members, schools, and other interested stakeholders with information to tell a compelling story at the local level. While a significant portion of the Take Note campaign specifically aims to increase student enrollment by working closely with court reporting programs, there is much that individual court reporters and captioners can do to support the effort. In the past two years, NCRA’s National Court Reporting & Captioning Week has captured the public’s attention with a multi-faceted approach by NCRA and its members. Likewise, by leveraging social media and providing outreach materials to members, the Take Note campaign can reach more prospects through real-life court reporters and captioners. The resource center, found at crTakeNote.com, features sample social media posts and icons, template flyers and advertising graphics, how-to promotion guides, and much more. For schools and members alike, crTakeNote.com is the campaign’s one-stop shop for support materials and more information.

Did you miss the detailed presentation kicking off the Take Note campaign in San Francisco? See what you missed by checking out the YouTube video in the resource center of crTakeNote.com.