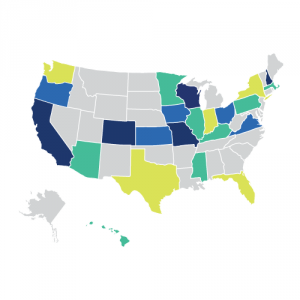 NCRA’s 2016 National Court Reporting & Captioning Week will officially end on Feb. 20, but the activity and awareness generated by this year’s event is expected to continue well into the weeks following by members of the profession and the media.

This year’s celebration marked the busiest with reports of activities coming in from 17 states. While this year many of the activities being reported are being hosted by state court reporter associations, a number of court reporting programs and local associations have also organized events. In addition, NCRA’s Communications Team has tracked a significant increase in the number of articles and stories appearing in media outlets across the country generated by the celebration. Below is a list of some of the activities reported as well as media mentions. A full roundup of events and media coverage will appear in the Feb. 24 issue of the JCR Weekly.

NCRA President Steve Zinone, RPR, an official court reporter from Pittsford, N.Y., kicked off the week on Feb. 15 by participating in a panel discussion hosted by the College of Court Reporting in Hobart, Ind. He was joined by Tonya Kaiser, RPR, CMRS, a freelance reporter from Fort Wayne and president of the Indiana Court Reporters Association; Susan Gee, RMR, CRR, a freelance reporter from Cincinnati and president-elect of the Ohio Court Reporters Association; and Kathy McHugh, RPR, CRR, a freelance reporter from Philadelphia and president of the Pennsylvania Court Reporters Association. The discussion, which took place online via the college’s Blackboard Collaborate, was hosted by CCR President Jeff Moody. More than 30 participants joined the discussion to hear what the panelists had to say about the greatest challenges they faced in court reporting school and how they overcame them, as well as how they were motivated to become leaders within their associations, the benefits of membership at the state and local levels, and the importance of certification. The hour-long session was recorded and can be heard here.

Zinone followed with a visit to the court reporting program at Cuyahoga Community College in Cleveland, Ohio, on Feb. 17, where he participated in a meet and greet with students, faculty, and guests, before delivering a keynote address. Zinone shared with students his career experiences and highlights, as well as the importance of being involved in court reporting associations at the state and national level, and offered advice on how to succeed in the profession. He also noted the many job opportunities open to court reporters including official positions, freelance reporters, captioners, and CART providers. Zinone was invited by the program’s Captioning & Court Reporting Club.

Zinone will wrap up the week with as a guest on Stenographers World Radio airing at 10 a.m. CST, on Feb. 20. Zinone will be interviewed by host Al Betz and will address the future of the profession and the importance of Court Reporting & Captioning to raise awareness.

The 2016 event has also generated more media coverage than in years past. Although no major media outlets to date have used Court Reporting & Captioning Week as a springboard for a story, numerous local newspapers, radio shows, and television segments have.

NCRA member Gail McLucas, RPR, of GLFM Reporting, a freelance court reporter, was interviewed Feb. 17, on Smart Talk a segment hosted by Diane Rehm on radio station WITF, about what court reporters and captioners actually do. The segment was prompted by National Court Reporting & Captioning Week being sponsored by NCRA Feb. 14-20.

Listen to the interview.

On Feb. 14, CBS affiliate channel 12 in Palm Beach County, Fla., aired a story that features an interview with NCRA member Christine Phipps, RPR, owner of Phipps Reporting in West Palm Beach, Fla. In the interview, Phipps notes the high demand for court reporters as well as captioners both in and out of the courtroom. “Court reporters across the country have united and are all taking a personal interest,” said Phipps.

NCRA members, state associations, and schools are urged to share with the Association updates about how they have or plan to celebrate 2016 Court Reporting & Captioning Week by emailing aroketenetz@ncra.org. Other activities for celebrating the week include sponsoring a court reporting student’s NCRA membership or 2016 Convention & Expo registration fee, mentoring a student, or supporting one of NCRF’s programs by making a contribution. Looking for ways to participate? Visit NCRA’s Court Reporting & Captioning Week awareness page for an array of resources tailored for members, state associations, and court reporting schools. Resources include press release templates, sample proclamations, talking points, posters, presentations, links to the Take Note campaign materials, and more.

NCRA has also added a new power point presentation called Careers in Court Reporting to its Court Reporting & Captioning Week resource center. The presentation, which is located under the ideas and additional resources heading on the members, states, and schools section, can be customized by the user. It encourages audience members to learn more about the court reporting and captioning professions by downloading several articles showcasing careers in these fields. The page that features these articles will also capture contact information from those who access it and provide NCRA with potential leads for new members and students.

For a complete list of activities happening to mark the 2016 Court Reporting & Captioning Week, visit NCRA.org/Awareness.

For more information, visit NCRA.org. Career information about the court reporting profession — one of the leading career options that do not require a traditional four-year degree — can be found at crTakeNote.com.