The JCR asked members about the happy occasions they have reported, and several members were excited to share their tales of the adoptions, graduations, and other joyful occasions they have worked. One respondent noted that just writing up her story about the happy occasion she reported put her in a better mood, so keep these stories in mind when you need a mood booster – or keep a file of your own favorite jobs as a reminder. 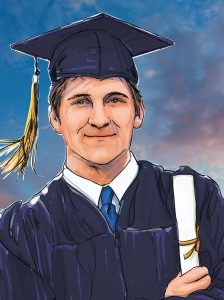 I feel like my first CART student and I grew up together. The day he graduated from college was one of the proudest days of my life.

After a number of years as an agency court reporter, I was offered a long-term assignment (through that same agency) providing CART to an incoming college freshman. I had never provided CART; he had never experienced CART. He was the only student who was deaf and non-ASL attending the university. He had been mainstreamed during his K-12 schooling. Wow! You can imagine his reaction when he started reading my screen that first day and finally saw how much information he had been missing. We literally were together for five years straight, through successes and failures, good classes and bad. We built a strong bond as he learned to trust and rely on me for both classroom CART and also communication access during times when my steno machine was not set up. He learned to lip read me very well, and I could reiterate conversations as we walked to classes together. I also was one of the few people who could understand him when he used his voice, and I think that allowed him a lot of freedom to express himself without the embarrassment of being misunderstood. In essence, I watched him become a strong, independent adult.

When graduation time came, I felt like a part of the family. His parents treated me with affection and gratitude. I became quite choked up as I captioned his graduation ceremony. I was overjoyed with happiness as I reflected back on his struggles, successes, and the bright future that was awaiting him.

It’s been a number of years now, and I’ve seen many students I worked with graduate. These graduations are always a time to celebrate the successes of the students with whom I’ve had the privilege of being their CART captioner. But I shall never forget my first graduate! 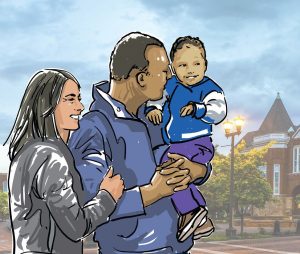 Adoption days at my courthouse

I am an official in a district court in Texas. I’ve been reporting around 23 years and have been in this court almost 18 of those years with one judge. We are strictly family law, hearing all of the child protective Services child abuse and neglect cases in Smith County, divorces, child custodies, attorney general child support enforcement cases, termination of parental rights, and just every really sad thing having to do with families and children.

But we also do several adoptions. We even do two Adoption Days in our court, one being National Adoption Day, which is huge affair with a party, clowns, balloons, lunch, cakes, picture slide shows, and large gift baskets for every child being adopted. These are the only good, positive cases we hear, and they bring much needed happiness and usually tears of joy to all of the court staff and participants.

Even for the regular (non-Adoption Day) adoptions in the courtroom, my judge has the entire cast of family and friends/supporters of the family come up in front of the bench with the family. After testimony is adduced to prove up the legal proceedings, the judge steps off of her elevated bench, comes around with the families, talks to the kid(s), holds the little ones (if they’re not bigger than her tiny frame), has everyone there form a large circle while holding hands, and then grants the adoption. She then kisses the kid(s) on the head, and everyone applauds. Then we go off of the record and have photo shoots with everyone present, then the family, and then the immediate family (with and without the judge).

My judge makes it very special for everyone, and it’s a joyous occasion. It’s quite an oasis in a very dry desert.

Early in my career I reported an adoption day on a Saturday. I had no children then and was really honored to be a part of that day, because I knew that everyone who took part sincerely wanted to be there. Little did I know that years later, my husband and I would embark on our own adoption journey.

A family law case I reported years ago did not start out happy but ended up that way. A troubled boy’s parents had basically given up on him. An employee at the boy’s school and her husband decided to take him in. After that he thrived, and the last I heard, he was going to college. The mother was supposed to be sending this couple child support, but she didn’t. That did not change this couple’s desire to make this boy a part of their family.

More recently I reported a case in which a young woman wanted to take over guardianship of a young boy. Her deceased mother had been the boy’s guardian. The woman and her boyfriend really stepped up to the plate to care for this boy who was not a family member.

I worked in a child-in-need-of-care court for approximately three years, and we participate in National Adoption Day. This exciting event is held in November every year, and we made so many forever families! Every event is filled, usually 10 or more families, adoptions of foster children, step children, closed adoptions, open adoptions. It’s so difficult to have a smile on your face, a tear in your eye, and try to write it all down. We would make a copy of the adoption proceedings and give it to the parents as a gift of their special day.

Also, I went to cover a court proceeding where the defendant could read the written word but couldn’t process the spoken word. So he would be able to look at my screen to see what the judge had said so he could appropriately answer. It was one of the most rewarding scenarios I’ve participated in. He could hear; he just couldn’t process it.

Given the nature of the business that occurs in the courtroom, very few instances are happy events. Years ago while working as an official court reporter, I had the pleasure of reporting each hearing when our nieces were adopted. The judge of the probate court at that time would take a photo of the child, or children, and their adoptive parent or parents with the use of a Polaroid camera. After many years on the bench, the judge had quite a photo album!

Of course, there are those occasions that just might tickle your funny bone; the lawyer during jury selection in a murder trial who states, “there may be graphic photos depicting the scene of the murder and the victim is usually dead”; the lawyer who comes before the bench with his suit coat firmly tucked in his pants following his return from the little boy’s room; the all-important name change so that the petitioner’s name would match the misspelled tattoo of his name his new bride had emblazoned on her person for him as a surprise; and the lawyer that was interrupted by his “client” during argument in a provisional relief hearing only to learn that she was not, in fact, his client.

All times, mind you, that the trained, professional court reporter remains composed with a stoic look on his or her face that would fool even the most practiced Texas Hold’em player. 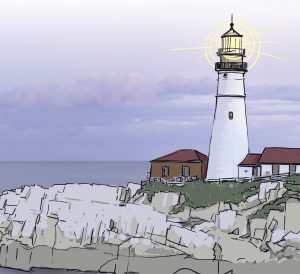 A narrated tour of historic lighthouses

I once provided CART on a ferry boat for the Hearing Loss Association (HLA) of Rhode Island. It was a narrated tour of Rhode Island’s historic lighthouses on Narragansett Bay. Our group was on the second or third level of the ferry. There were windows on all sides to view the bay. I had someone help me secure my screen to the front wall so it wouldn’t tip over. I sat in a booth sideways looking in towards the aisle. My projector was on the table. I remember wishing for a smooth trip so my projector would not get knocked over.

The narrator gave a historical and humorous presentation of all ten lighthouses. The HLA participants read my screen and got to look out at the bay simultaneously. It was a gentle ride, a memorable tour, and I got to feel like a tourist in my own state.

I’ve also provided CART for more than 15 graduations for parents, relatives, and graduates from colleges (state and Ivy League), the Naval War College, and high schools. They’ve been in every venue you can think of: auditoriums, arenas, gyms, outdoors, and in churches. I’ve projected on large screens or HD televisions. And I’ve used just my laptop for one or two consumers.

My most memorable was in 2014 when I was providing CART for the first Deaf graduate of the Warren Alpert Medical School of Brown University. I had been working closely with him since 2006 as an undergrad at Brown. It was held at the First Unitarian Church of Providence. All the graduates were sitting in the pews as their families and loved ones looked on. I got to sit right in the pew. I even participated in rehearsal beforehand to make sure my laptop and writer would fit and that my equipment would not interfere with the flow of the graduates receiving their diplomas. I feel blessed that I got to be there front and center and celebrate this special milestone with him. He’s now at Yale in his second year of residency in internal medicine.

Swearing in a judge

I had a friend who was appointed as a judge, and I volunteered to report that swearing-in ceremony. In our area, it is customary to have a swearing-in ceremony where the appointee is officially sworn in as a judge, and various friends and colleague speak about the new judge — some as a roast and some attesting to their character, ability, and so on. I was able to put in all the asides that we as reporters think about. That is, I put in parentheticals such as “rolling his eyes,” “whereupon Judge X blushed uncontrollably,” and “polite laughter at the bad joke.” You get the picture. It was quite fun, and my friend talked about how much fun he had reading it later with his family!