What to do with those old steno machines

Steno machines are no different than anything else in life. At some point, they need to be replaced. But what’s a reporter or captioner to do with their old machines? For some, the answer is to donate them to a court reporting program. 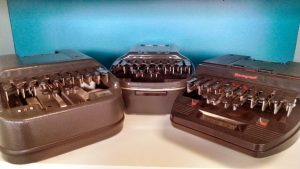 “A donated machine is very much appreciated by a student,” says Mary Beth Johnson, CRI, a professor of court reporting at the Community College of Allegheny County.

“Our school is located in Pittsburgh, Pennsylvania. We live in an area where court reporters are very generous. Our students have been the beneficiaries of donated steno paper, machines, and thousands of dollars in scholarship monies. As a teacher, I am always appreciative of the largesse of court reporters,” she adds.

State court reporting associations also recognize the importance of donating old steno machines and other items to benefit students. Recently, both the California Court Reporters Association and the Wisconsin Court Reporters Association (WCRA) issued calls to their members to donate old machines to schools and to volunteers who are leading the A to Z Program, a free introductory course of basic steno for those who might be interested in pursuing a court reporting or captioning career.

“In Wisconsin, I know of several reporters who donated their steno machines to the court reporting schools and also to the A to Z Program,” says Sheri Piontek, RMR, CRR, CRC, an official from Green Bay and president of WCRA.

“The A to Z Program is what prompted Wisconsin to request donations of machines as a means of trying to increase the number of students in the court reporting profession. The only way this program is successful is by asking the reporters to donate their older models to the students,” she adds. To date, WCRA members have hosted two A to Z Programs within the state and have a third planned for the fall, Piontek notes.

Donating old machines to court reporting schools can also help offset tuition expenses for students. In some cases, donating a machine can be used as a tax deduction.

“When I decide to recycle or toss my steno machine, I give it to a court reporting student,” says Laura Lynn Murphy, RMR, a freelance court reporter from St. Louis, Mo.

“Many of them are renting a machine. I like to think that if they don’t have the rent to pay, they will be more inclined to join Missouri Court Reporting Association or, perhaps, NCRA as a student because they have to pay dues to join,” says Murphy.

“If there isn’t a need from a student, I donate the steno machine to Ranken Technical College. The students there are learning how machines work and when they tear down, hopefully, learn the machinations. I also give them old Dictaphones or digital equipment, anything that would help their training and not go into landfills,” she adds.

Murphy also suggests offering an old machine to companies that sells new ones in exchange for credit toward a new purchase. Many times, she notes, companies will use the old machines for repair parts.

Donating an old machine to a student is invaluable, according to Kelly Moranz, CRI, program manager and adjunct faculty at Cuyahoga Community College’s captioning and court reporting program in Cuyahoga, Ohio.

“These machines are distributed to students in need, and it can sometimes mean a difference as to whether they can begin the program or not,” Moranz says.

“Professionals typically reach out to us if they have a machine to donate. Through the grants we have received in the past, we have machines for campus students that cycle through the program. We are able to supply online students with the same opportunity with the machines donated by professionals. Additionally, for students mentioning they have spoken to a professional, I encourage them to reach out and see if they have an extra machine available,” she adds.

Johnson notes that she and her staff are not at all shy about asking for donations of old machines and other items, especially since working professionals have been consistently very generous with the program.

“Donations are critical to the success of our program. Please know how grateful we are for decades of donations, not limited to machines, but also including guest speakers, mentors, and scholarship donors. In Pittsburgh, professional reporters donate their time, talent, and treasure consistently,” she says.

Published in Career and Technology