Captioning word of the month: Between the pipes

Below is the second in a series of monthly featured words to help captioners build their dictionaries and knowledge. The words for this series are being provided by Steve Clark, CRC, a captioner from Washington, D.C. Clark captions for Home Team Captions and covers the Baltimore Ravens NFL team  and the Washington Nationals baseball team. Clark also co-chairs NCRA’s Broadcast and CART Captioning Committee.

Since Stanley Cup fever is raging in Washington, D.C., and Las Vegas, our term this week, between the pipes, comes primarily from hockey. You will also hear this term in field hockey, lacrosse, and soccer. The image below is of a typical hockey goal showing the pipes. 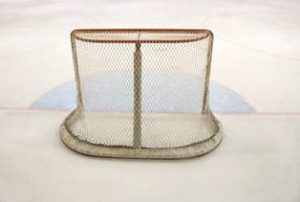 The phrase “between the pipes” refers to the area in between the two vertical posts to which the goal net is attached.

The goalie that is protecting this area is said to be “between the pipes.”

“Once again the Oilers have their veteran goalie between the pipes tonight.”

“No matter who is defending, the Penguins just keep finding a way to put it between the pipes.”