Joseph T. Pudlo, age 86, passed away peacefully on May 12, 2018.  He was a partner with former NCRA President Sally J. Cochran and Secretary-Treasurer Richard B. Heilig, along with Jerome B. Sewell, John Jaroski, and Ken Kozlowski in Chicago.

“Mr. Pudlo,” as he became known to the legion of reporters he trained, was an avid story teller and mentor, and he left a significant mark on everyone he came in contact with. His high standards challenged every reporter to be the best and always “reach for the stars.” 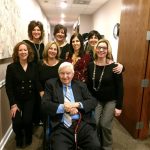 Here is a recent photo with a small fraction of reporters he took under his wing when they were very young and now showing their respect almost 30 years later.

Everyone has a “Joe Pudlo story” that they could tell and would fill the pages of this Journal; but suffice it to say, he will be remembered fondly. In his honor we will always sing:

Published in In Memoriam and News