The power of a community

When Hurricane Michael made landfall in Mexico Beach, Fla., as a Category 4 storm earlier this month, no one expected to return to the mass devastation it left behind in the small coastal community, especially court reporter Lisa Patrick. A photo of her standing on the cement slab that once supported her home made national news as the world saw and shared in the massive loss so many in the area had suffered. 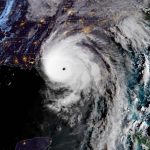 “I could tell from the video that I saw that Lisa’s home was gone as I had been there several times and knew exactly where it was. I first saw the photograph of Lisa standing where her house used to be in a text from one of my court reporters. Even thinking of that brings tears to my eyes even now. It just broke my heart to see that,” she added.

Quick to help one of their own, Zirbel said that court reporter Michelle Smith, RMR, who also works for her firm, launched a GoFundMe page to benefit Patrick. Zirbel said she then posted the information on the Stewart & Shoman Facebook page and on the NCRA Firm Owners Listserv, as well as on the Listservs of other groups the firm belongs to. The response, she said, has been wonderful: “I received many calls and emails from other firm owners with offers of support. Their response was immediate when I posted on the NCRA Listserv. “

Zirbel said that she and Patrick had spoken on Monday before the storm made landfall about their evacuation plans.

“None of us really anticipated that the storm was going to be as bad as it was. As a firm owner I was really just thinking about being without power and internet for a while, and I went to Orlando so that I could answer work calls and emails. Lisa decided she would go to a hotel in Dothan. She brought her machine and computer but left many things in her home that, if she knew what was going to happen, she certainly would have taken,” Zirbel said. “Lisa is a woman of faith and has already secured a new apartment and is ready to start a new chapter.”

NCRA member Donna L. Collins, FAPR, RPR, CRR, CRC, owner of Collins Realtime Reporting in Dallas, Texas, said the images of the devastation, particularly of Patrick at the site of where her home once stood, motivated her to contribute to the GoFundMe effort.

“We are like a family. When one member is down, we must raise them up,” she said. “Despite our differences on many issues, we all truly care about our fellow professionals.”

Patrick said she first heard about the GoFundMe effort when Zirbel asked for permission to share the photo of her standing where her house once stood that was on the internet.

“A photographer for Getty was in the area the first time I went back to my property, and he was photographing the obvious raw emotions of seeing everything gone. It was the Monday after the storm,” Patrick said.

To date, Patrick said that FEMA  (Federal Emergency Management Agency) has provided minimal help of just over $2,000, and that without the outpouring of help coming through the GoFundMe effort, she would have no idea what to do.

“There aren’t words to express how hopeless and devastated something like this makes you feel. I was devastated when it happened and found hope through the kindness of friends and strangers. It has meant more than words can say. There just aren’t words, only immense gratitude,” said Patrick.

Patrick added to her story that she has been divorced and single for nearly 20 years and relies on the salary she earns as a court reporter. She had recently purchased a lot in Mexico Beach and planned to build a small forever home.

“I work hard. I was a renter for many years. I always carried renter’s insurance. It was automatically charged on my credit card monthly — something I didn’t have to think about,” she said.

However, due to fraudulent activity on her credit card earlier in the year, Patrick had to change card numbers and forgot to update the insurance company. When she realized the policy automatically had canceled, it was after May 1, and insurance companies will not issue or renew policies between May and November due to the hurricane season, she explained.

“The one year I don’t have my insurance in place, a catastrophe like this happens. It’s surreal,” Patrick said.

“So to say I was devastated when I realized the magnitude of losing everything is an understatement. Debbie, Michelle, and the rest of my work family will forever be my heroes. They have come through for me in such a dark time and in such a huge way,” Patrick added. “People in your life tell you they love you. These girls show what true love is! I’m crying as I write this. I pray God repays them every day, because I know I never can. And I know He will!”

Visit the GoFundMe page for Lisa Patrick to donate. To ensure that the full amount of all contributions benefit Patrick, consider making the donation on the page using a PayPal account.

Published in People in the News and Volunteering