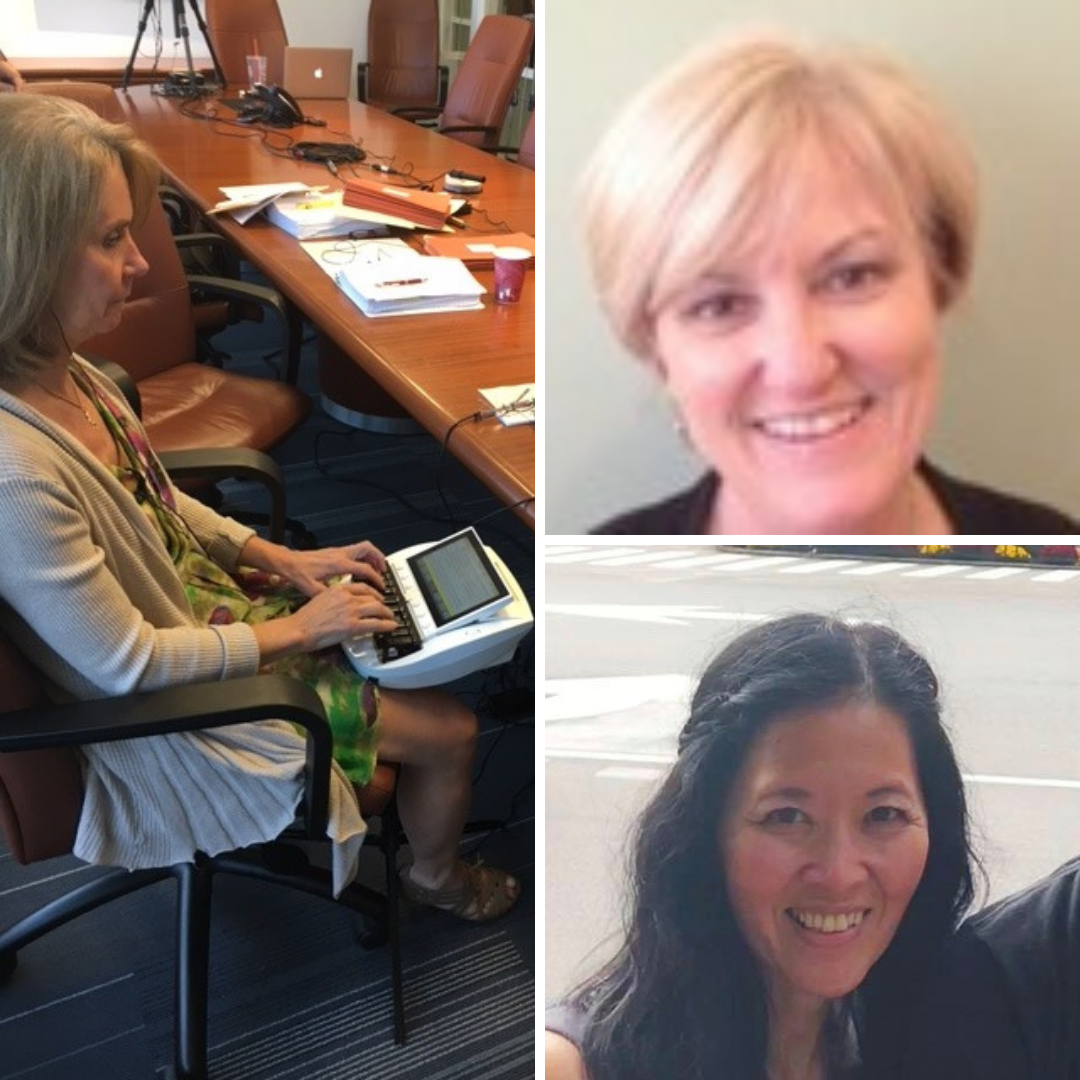 Discovering Justice, a nonprofit group based in Boston, Mass., that works to empower future generations of leaders through innovative programs that utilize courtrooms and classrooms as civic spaces, recently completed a 10-week virtual mock trial program for middle school students throughout the Boston area. The program partnered legal mentors from local law offices, law schools, and city offices, as well as several NCRA members to present cases online about First Amendment free speech rights to a federal or state judge in a mock trial.

According to Luke Matys, senior education associate and mock trials coordinator for Discovering Justice, the organization has typically offered the mock trials live throughout the state. They were forced this year to move to a virtual platform due to the pandemic. A total of 12 teams of students and volunteers participate in each hour-long trial.

Among the NCRA members who volunteered to participate in the latest round of mock trials was Rosemary Grogan, RPR, a freelance court reporter from Cohasset, Mass., who said that fellow NCRA member Kathy Silva, RPR, CRR, an official court reporter and freelancer from Andover, Mass., and past president of the Massachusetts Court Reporters Association, was the inspiration for her to sign up.

“Kathy is always volunteering and doing so much for our profession,” Grogan said. “We all need to step up to the plate and help her as a team.”

According to Grogan there were about 56 people on the mock trial Zoom call she participated in. While most were middle-school students, also in attendance was a federal court judge, their clerk, and the Discovering Justice team who served as mentors and assigned the students as attorneys, witnesses, and jurors who actually deliberated.

At the start of each trial, the facilitator from Discovering Justice asked the judge, the clerk, and the court reporter to introduce themselves and explain their role in the proceedings.

“I introduced myself when it was my turn and spoke about how I’ve been doing this for almost 41 years, and no electronic recording device is going to replace me yet,” Grogan said. “I tilted the camera on my Zoom screen to show them my laptop containing my RT screen and my Diamante machine where I write. Then I just sat back and enjoyed the presentation that lasted for an hour and a half,” she added.

Silva, who inspired Grogan and other NCRA members to participate in the Discovering Justice program, said she started attending the mock trials a few years ago when an email asking for volunteers was sent out by the organization to all court personnel. “When I responded to the email, I offered to play the role of a court reporter but was told they were in need of jurors, so I agreed to fill that need,” Silva said. “Shortly after the event I contacted Discovering Justice and explained how court reporters are an integral part of the process and always in the courtroom during federal court proceedings. I asked how they would feel about having volunteer court reporters participate the following year,” she added.

During normal times when the mock trials have been held live in a courthouse, Silva said she has had the opportunity to talk with some of the student participants. “When volunteering for the in-person hearings, court reporters participate in our usual non-intrusive way. The judge does make mention of the role of the court reporter in the proceedings. I have had a few students and parents come up to me afterward and ask how that little machine works,” she said.

Silva said that to prepare for the mock trials, participating students study units prepared by Discovering Justice and then are mentored by a volunteer lawyer in preparation for their role as student attorneys. There is also a segment on the role of the court reporter in the study units.

Silva said that the Discovering Justice program offers a huge volunteer event for the Bar Association and the court system especially because federal, state, and appellate judges volunteer their time to act as the judge presiding over the trials and because attorneys volunteer as mentors for the student groups. “As a part of the judicial system, court reporters should be participating in this huge outpouring of encouragement for students to become interested in pursuing a career in the legal field,” she said. “I personally first became interested in the field of court reporting when a court reporter gave a talk in my middle school typewriting class (yes, it was a manual typewriter),” she added.

In her quest to promote the profession, Silva is also attributed with prompting NCRA member James P. Gibbons, RMR, a federal official court reporter in Boston, Mass., to participate in the mock trials. Although Gibbons said he has been watching the Discovering Justice staff in his courthouse for years as they set up their mock trials as well as the participating students practicing with the mentors from various firms and the nervous family members in attendance hoping their child would do well, volunteering for the program himself became a no-brainer when Silva approached him in 2019. “That’s when the light went off,” he said.

In his first-time mock trial, which was held in-person, Gibbons said he had the opportunity to talk to participants about what his role as a court reporter is. “In 2019 when we were live, many of the students as well as family members and mentors, who are mostly young associates, gathered around my area and looked at the computer and steno and asked how it worked. These were middle school kids, so the questions that I remember were: Do you see a lot of bad guys? Do you laugh? Do people yell at each other? One parent asked if there’s ever any fights,” he said.

“I’ve found that most folks do not know what court reporters do. Almost every jury mentions to me, ‘Oh, you do it the old-fashioned way. You don’t speak into the recorder.’ I am frequently explaining to people who come to observe, as well as witnesses during breaks, what we do,” he said. “What really gets people’s attention is when I mention captioning and CART.”

Also prompted by Silva to volunteer for the program was NCRA member Justine Pettinelli, RDR, CRR, a freelance court reporter from Quincy, Mass. The 2020 event marked the second time Pettinelli has participated. “I thought it sounded like a wonderful program and is such a great opportunity for the students to participate in. I thought it was important for the students to have the whole courtroom experience, and we play an important role in the courtroom. It gives young people a broader view of the entire legal process and some insight into a profession they may not have even known existed,” she said.

Although the last mock trial held via Zoom did not allow much interaction with the participating students, Pettinelli said that during the in-person trial she volunteered for, the main question she was usually asked was how the steno machine works. “I generally demonstrate and explain the process of writing in syllables in shorthand and then translating it into English on my computer. I would highly recommend volunteering for any activities that educate and bring awareness to our profession.

NCRA member Lisa M. McDonald, RMR, CRR, a freelance court reporter from Winchester, Mass., said she volunteered for the Discovering Justice effort after being contacted by a distinguished colleague regarding the opportunity to serve the role of a court reporter in one of the mock trials. McDonald, who has promoted the profession before at a number of career fairs and other similar events, said she feels it is important to embrace any opportunity to showcase court reporting.

“This profession is so rewarding personally. It is flexible, educational, and exciting! I truly believe that, if students graduating high school and/or displaced workers knew of the existence of this profession, the enrollment in programs would grow at a quicker pace. With so much taking place nowadays via remote means, there are so many more opportunities to learn the skills to become a successful reporter,” she said.

Volunteering to participate in the mock trial program is very rewarding to Gibbons because of what he is able to experience. “You get to observe how hard these kids have worked for ‘the big day,’ how seriously they take it, how nervous they are, and how relaxed and happy they are once it is over. You also see the emotions of family members, the anxiety at the start which then turns to pride. It’s all smiles and thunderous applause at the conclusion…something you don’t usually see in federal court.”

“It was an honor and pleasure to be able to participate in such a great cause and see how hard everyone worked to make this happen,” added Grogan. “I couldn’t believe the students were middle school students – they were so poised and professional.”

“Many court reporters are looking for ways to volunteer in support of future court reporters and court reporting students,” Silva said. “Participating in a school career day or mock trials is a great way to volunteer for one event without committing to committee or board service. Together we can make a difference in building awareness of the profession.”

Published in News and Volunteering