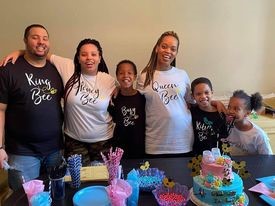 I was about four or five years old, and for some reason I got to accompany my mother to work. It all felt very VIP. As we drove up, I saw crowds of people heading into an impressive, imposing structure, but my mother circled to the back where only the “special” people entered. Now I followed my mother into what felt like the Bat Cave, down the black and white marble steps of the Markham Courthouse in Markham, Ill., a south suburb of Chicago. Hand in hand we walked down these palace-like steps to a room full of court reporters working furiously in glass-enclosed cubicles. For a short time, I climbed the mountain of boxes of paper notes in the center of the room, watching them work and smelling the ink. When I first heard that my mom was a “court reporter,” I pictured her as a Lois Lane, someone who wrote articles for newspapers and helped Superman get it done, something akin to a superhero herself. Thirty years later, I realize I was pretty much right.

After I met her fellow reporters, it was time to watch Mom work. She cautioned me that I must sit next to her and color quietly. “Yes, ma’am,” I said, taking her hand again and ascending from the Bat Cave in the elevator and walking the behind-the-scenes labyrinth to enter the courtroom. As we entered behind the judge’s bench shortly before proceedings began, it seemed to me that we had just taken the stage. Chairs faced us, and people started to assemble in the “audience,” so where else could we be? In our local church my mother was often our choir’s featured soloist and lead in our Christmas and Easter productions. My mother was a gifted soprano, and I expected her to stand and sing at some point. (Can you imagine? The singing stenographer.) Soon proceedings began. People were talking. The guy in the black robe was nice …I think. But I often caught people in the gallery – nay, audience – stealing glances at my mother curiously as she regally pressed these cute buttons on this curiously alien machine, either oblivious or indifferent to their attention. She looked so cool! I was in awe of her. I was in awe of that machine. And not for the first time in my life or the last, I determined I would be just like her when I grew up. Now here I am, Kairisa J. Magee, RPR, daughter of the legendary Janyce W. Booth, RMR, CRR, CRC.

When I think about the sacrifices I’ve made as a court reporter, I think about the sacrifices she made way back in the day that now I make as I try to walk in her footsteps. Obvious sacrifices are the sleepless nights of scoping and/or proofing or canceling plans with family and friends that I had really looked forward to or postponing date night with the husband for the third time, or missing a field trip that my kids really wanted me to chaperone. These are things we all know about, right? To some degree or another, this career makes us sacrifice our time like few other career paths do. Sometimes, as a parent or mother, you may wonder if you’re damaging the kids in the process of the sacrifices we all inevitably have to make in this profession. As the daughter of a stenographer, let me assure you: The kids are all right. There will be other trips, dates, adventures.

It will work out. And if all else fails, the psychiatrist cannot bill you for their therapy. Seriously, what I came to realize is that we all, every adult, stenographer or not, give up or sacrifice things for our work. I also came to see there are two different kinds of “giving up.” One is called “sacrifice,” and the other is called “martyrdom.”

Let’s talk about “martyrdom” first. Have you ever talked with a court reporter and all they do is gripe and complain about what they’re missing out on, what they’re losing, what they can’t do because of this work thing or that work thing? Has that ever been you? Honestly, it’s been me from time to time too. Sometimes you have to take a minute and feel sorry for yourself, but staying in that mental space perpetually is living in a state of martyrdom.

Now let’s talk about “sacrifice.” Why is it sometimes I don’t mind missing all the above-mentioned stuff? Why is it sometimes that I’m proud of what I set aside? I realized that I’m proud because I had a reason for the decision to deny myself or my family something. In those cases where I had peace about the “giving up,” it was a part of a plan. So I’ve come to the conclusion that denial with no purpose equals martyrdom and brings cyclical sadness and disappointment, but sacrifice equals short-term denial in the service of long-term gains.

My mother made it to plenty of field trips, but I wanted her at all of them. She could not do that, but what softened the blow is that she partnered me in the process. She’d let me know, “I can’t make it this time, baby, but wait ‘til you see where we’re going this summer.” She didn’t have to say anything else. Our summer vacays were epic, at least two weeks, and often international. I’d say to my friends, “My mom can’t come to the zoo, but we’re summering in Toronto this year, so…” Yes, I was a brat, but the point is my mother’s sacrifices kept both my brother and me clothed well, fed well, and her sacrifices sent me to private school and my brother to a very prestigious military high school. Janyce had a plan, and her sacrifices paid off.

So how do I/we apply that concept today? Well, this is how we do it in the Magee household: I have a “business meeting” with each of my littles (Joi, 17; Hope, 12; Max, 10; Titus, 8; and Sophia, 7), and we pick a thing, big or small or even an activity, for us to do together. On payday they see me make a deposit of some measure into that envelope until we have saved enough to do that activity or purchase that thing. My husband and I are saving for a babymoon before I have our sixth baby this fall. When I recently had to bow out of our anniversary/Mother’s Day weekend plans for a weekend expedite, once I told him this job would pay for Fogo de Chão, he left me in peace. Happily. And I didn’t have this guilt in the back of my heart over our familial sacrifice. (We redid anniversary/Mother’s Day a different weekend instead.)

If what you’re doing has no goal and no benefit, you can burn out quickly and ultimately grow to hate this career you worked too hard to break into. In our field we are constantly bargaining our time away; so sacrificing to practice or getting a better understanding of your software may seem like a waste of time short term, but if in the long term you get through transcripts faster and are thusly able to spend more time doing things with and for the people you love, then I say sacrifice on! So let’s make a plan and make the work work for us so that our sacrifices won’t be in vain.

Kairisa Magee, RPR, is a freelance reporter in Tallahassee, Fla.