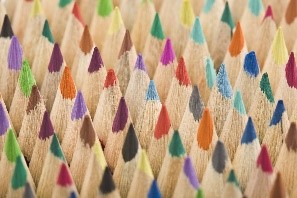 Stenographers have a passion for punctuation. An article published in the Sept. 22 JCR Weekly in honor of National Punctuation Day had the most hits of any article that week. And the Question of the Week about punctuation marks received a record response. Why all the fuss? The JCR asked some NCRA members about their punctuation frustrations.

If you notice, when people write emails or Facebook posts or almost any type of correspondence, most people end their sentences with an exclamation point these days. I think people do this so they can get their points across without seeming to be yelling (all caps) or being rude. I must admit I’m guilty of doing this with my Facebook posts, but never in my transcripts, correspondence, or any professional type of communication.

“The wife was sobbing during the funeral! She used all her tissues!”

I believe the hyphen is the most misused punctuation [mark]. Our conversation and communication has become so informal with texting and emails and social media. And I think many people, myself included, use the hyphen to separate thoughts, ideas, topics when maybe a period or a colon would be more appropriate.

The punctuation that I view as misused is the apostrophe used as a plural. When I see “I saw the Smith’s today” or “Come in and enjoy a few drink’s,” I cringe! I want to carry a Sharpie with me and make the correction on the menu board or call out the person who writes that the “Smith’s” are coming over. My husband calls me the Apostrophe Police. I know I’m not alone out there!

An example is: “The car’s were driving erratically.”  An apostrophe shows possession, not plurality.

We have a lot of PI work, construction defects with medical and expert witnesses. I see the comma misused the most with instances of every sentence beginning with ‘So.’ For easier reading, sometimes the comma can come before ‘so’ and continue on with the thought.

Another instance is a comma after every ‘Now.’ It doesn’t always require a comma.

Not that it’s the most misused, but not used enough in the correct situation. There are four rules for using semicolons, but I’m just focusing on one: Independent clauses.

In punctuating transcripts, one rule that is most useful for me is independent clauses. A semicolon connects two closely related complete thoughts. It indicates a greater pause than a comma, but not as great a pause as a period. I love how a sentence flows using this rule.

The ink cartridges were ordered on Amazon last week; they should be delivered today or tomorrow.

The warehouse’s early sales hours are for preferred business members; it is not open for the general public.

“They went to the store and bought milk; eggs; and apples.”

However, the most common misuse is to not use a semicolon when a semicolon is appropriate to use.