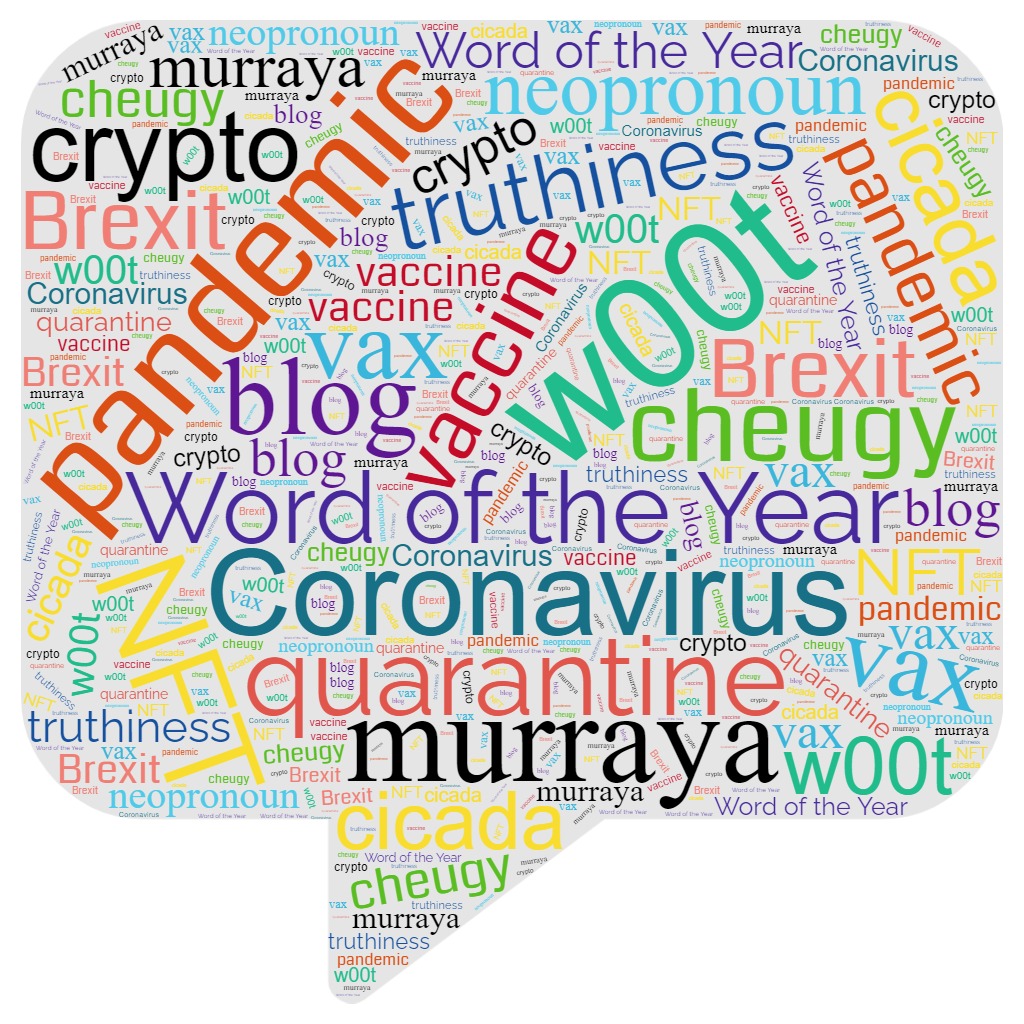 By Ellen I. Goff

Remember our days of innocence, of inanity, of pandemiclessness? Remember when the Merriam-Webster Word of the Year (WOTY) was something fun and quirky, like blog (2004), truthiness (2006), or w00t (2007)? Even those three words were inventions, as if avatars of a more whimsical time.

Then came the financial crisis of 2007-2008, and it’s no surprise that the new WOTYs became signs of the times. The year 2008 brought us bailout, followed by admonish in 2009, austerity in 2010, and pragmatic in 2011. Fast forward to 2020 and you’ve probably got a good guess where this is headed. The WOTY last year was pandemic, followed by coronavirus as the runner-up. Among the top 10 were also schadenfreude, quarantine, asymptomatic, defund, and antebellum. It was a dark year.

But things may be brightening up in 2021. Merriam-Webster’s latest WOTY – vaccine – may very well save us from last year’s WOTY. Words of the Year aren’t just picked out of the ether, although they might as well be. Merriam-Webster first started the practice in 2003, the word that year being democracy. At one time user submissions and online polls were considered in choosing the winners, but since 2008 the dictionary has compiled the list based solely on the words which were most frequently looked up on its website.

Think back over the year and the word vaccine might have actually been the word you heard the most or said the most. But take a look at the list of Merriam-Webster’s top 10 runners-up, and you’ll also take a quick walk down the 2021 memory lane. The most frequently looked-up words sometimes reflect the zeitgeist, the cultural, social, or political moments we are all having together. Often just one speech or movie will send us to Merriam-Webster to look up a word. Sometimes it’s a drawn-out political battle that plays out in the TV news, in our daily newsfeeds, and in our daily lives. Other times it’s a sports story, a movie, or a Mars rover. And once, in July, a young girl named Zaila Avant-garde spelled m-u-r-r-a-y-a to win the Scripps National Spelling Bee. Look it up.

Is your dictionary up to date? Check out these other notable words from 2021. Dictionary publisher Collins chose NFT as its Word of the Year. NFT is defined by Collins as an “abbreviation for non-fungible token: a digital asset on a blockchain that can’t be replaced with something else.” On the 2021 shortlist of other notable words chosen by Collins are: crypto, double-vaxxed, neopronoun, Bridgerton, and cheugy. The Oxford English Dictionary named vax as its Word of the Year and Cambridge Dictionary chose perseverance in honor of NASA’s Mars rover. Previous winners from those dictionaries include: selfie, photobomb, binge-watch, fake news, climate emergency, Brexit, and post-truth.

Ellen I. Goff is NCRA’S Senior Marketing Manager. She can be reached at egoff@ncra.org.