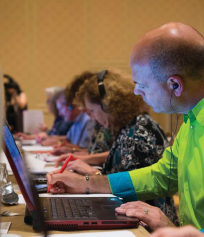 During the NCRA Convention & Expo, six stenographic reporters attempted to break the standing world record of 360 words per minute. Although no new record was set, the challengers excited and inspired many.

During the event, six challengers attempted to take down verbatim speeds of 370, 380, 390, and even 400 words per minute. While no one broke the record, Kislingbury came close with a 94.54 percent score on his transcription of a 370 wpm leg.

Spectators of the event sat in absolute silence as the recordings were played, but the buzz picked up between recordings, as people leaned over and told each other that they could barely make out the individual words. The event emcee, Bruce Matthews, RDR, CRR, of Cleveland, Ohio, provided commentary and man-on-the-street interviews as the six challengers transcribed. As the event drew to a close, people rushed the stage to congratulate the challengers, and throughout the convention, they were stopped and thanked for promoting what professionals in this field can truly do. After the event, we caught up with the six challengers and asked them to offer insight on the attempt to break the record.

I thought it would be an opportunity to bring positive exposure to the field of court reporting and captioning.

If I trained for this competition, it would have destroyed the solid foundation of my realtime writing.

What advice would you give to students or reporters about increasing their speed while maintaining accuracy?

Don’t drop the Qs and As to gain speed. In my opinion, realtime writing is the focus now and into the future. Learn a basic theory, and then build upon it by shortening the theory. If you can’t think of ways to shorten the theory on your own, there are plenty of resources and forums full of ideas.

Absolutely! I’m even faster now as a result of listening and practicing to the higher speeds.

I was surprised Mark did not break the record, but after transcribing a take myself, I can understand how two more minutes would have helped him in the transcription process. I was pleasantly surprised at how inspired, supportive, and happy the audience was even though the record was not broken.

The pride in myself that I tried. The respect of my peers that I did, as well. Plus, it would have been nice to beat the pants off Mark Kislingbury!

What was it like for you up on the podium?

I heard the crowd rooting for us. I did hear the shock at how fast the dictations were. Quite frankly, I was equally shocked at how fast 400 wpm was compared to what I had been practicing. I agreed with them 100 percent! But during the dictation, I was so pleased, thankful, and shocked that we could hear a pin drop in the room. Awesome!

Did anything go through your mind as you tried to get the words down, or did you just find your focus point?

When I do speed contests, I focus on “the voice.” It’s me and the voice — that’s it. I have tunnel vision during the dictation. I actually got more confidence as Mark Kislingbury kept turning down the opportunity to transcribe 400, 400, 390, 390 … so, thanks, Mark!

I would do it again tomorrow if I could. Now that I feel more confident that it is within reach, it is doable, it is possible, I want at it now. Challenge us — and keep challenging us — for we certainly will not reach any higher than we are right now.

Did you go into the event with a specific strategy?

I always drop Qs and As the moment that I sense that putting them in will risk that I drop words. (To the teachers who may tell students, “Never, under any circumstances, drop Q&A symbols on purpose, because they are important,” I respond, “Never, under any circumstances, drop words, because they are important.” I maintain that, if it’s so fast that you’re going to drop either symbols or words, then the Qs and As are the first to go because they can be replaced 95 percent of the time in the correct place; words cannot.) However, I was most concerned about combating nerves. So, I made the event, in my own mind, not about me but rather about the fact that I and the other participants were doing this for the profession, for other reporters and students, to inspire them to see what’s possible. This had the effect of making it more of a “noble cause” than a “test,” and it worked wonders in removing any test nerves.

I would love to. I want to keep improving, to pave the way for future young people to see what’s possible.

Fame! I wanted to get in the book to show my grandkids – and have fun trying! Also, it was a great way to promote our profession.

As we were writing, I knew the audience was there but everyone was so quiet, it was no problem.

What advice would you give to students or reporters about increasing their speed while maintaining accuracy?

My advice on speed-building: Make sure your heart is in it when you’re practicing. Otherwise, it’s wasted time. Twenty minutes of practice can be as worthwhile as two hours. I always practice at the speed of whatever contest I’m trying to pass and for the exact amount of time it will take, so that I know what I’m in for and how long I have to hang on. When I was speedbuilding in college, I remember practicing at about 20 wpm faster than where I was. I don’t like feeling that my fingers are out of control and slapping at the keys. But it’s whatever works for the individual. There’s lots of advice out there, and try everything till something works!

How the room filled up! I didn’t think that many people would come.

I already have seen gains in my day-today writing on the job. I wanted to sit among the greats of this profession and hopefully demonstrate the extremely hard work I’ve put into this craft despite the relatively short time I’ve been in it. Also, I’m hoping through exposure from the competition to bring youth into a profession that is often mistaken as menial, secretarial, and moribund by my 20-something-year-old peers who for the most part never consider becoming a stenographer (provided they even know that stenographers still exist).

I’m hooked. I love the excitement, the attention/respect from peers, and that when training to compete in one of these, it only improves you professionally. There is nothing to lose and much to gain.

I was surprised how all the other contestants were just normal people, too.

Looking back, what was the best part of attempting the new record for you?

Forcing myself to practice at insanely high speeds has made my realtime beautiful. Very seldom does the pace of normal speakers feel overwhelming to me anymore.

Why not try to be the best?

The gain’s already happened. Sitting down and writing a total of eight minutes of Q&A won’t bring as much gain as the past year and a half of training did.

Did you go into the event with a specific strategy?

My strategy was simply to write as fast and best I could. Sounds like a cheeky answer, but that’s it.

What was it like for you up on the podium?

I love the stage, so I was completely comfortable. I was aware of the crowd until the dictation read-on, at which time I went into my own world. Until it was transcription time and I had to deal with the audible interviews — then I needed to put in earplugs and put on my headphones to muffle the noise.

The spirit and enthusiasm of the audience was incredible.