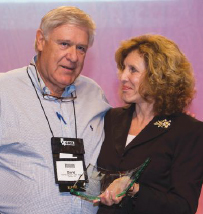 David Jackson, RDR, from Dallas, Texas, received NCRF’s 2013 Santo J. Aurelio Award for Altruism during NCRA’s Convention & Expo in Nashville, Tenn. Jackson is a principal with the United American Reporting Services in Dallas. He is the 15th recipient of the Aurelio Award.

Jackson, who served six years in the U.S. Naval Reserve, including one active year as a court reporter at the Naval Guided Missile School at Dam Neck, Va., began his court reporting career as a freelancer in Oklahoma City. In 1971, he joined the firm of Federal Court Reporters and continued service with the company after it merged with United American Court Reporting Services in 1986.

Jackson is regularly involved with organizations at the local level and holds membership in the Dallas County Shorthand Reporters Association. He served as its president in 1979. At the state level, he is a member of the Texas Court Reporters Association and served as president of the group from 1983 through 1984. He is a past recipient of TCRA’s Distinguish Service Award and is a member of the organization’s Hall of Fame.

Jackson holds membership in NCRA and served on the organization’s board of directors from 1998 through 2001. He is also a member of the Society for the Technological Advancement of Reporting and a founding member of Legal Image Network Communications, serving as its vice president and treasurer in 1991.

During his career, Jackson served two terms on the Texas State Bar Association’s Unauthorized Practice of Law Committee. He was a member of the advisory committee for the Court Reporting Institute of Dallas and the Professional College of Court Reporting. He was also appointed by the Texas Supreme Court to the Texas Court Reporters Certification Board and served seven years as co-chair of the Testing Committee, dictating and administering the Texas CSR test for court reporting. He has served as member of the Texas Supreme Court Advisory Committee since 1992. His articles have appeared in the Texas Trial Lawyers Forum and in TCRA’s Texas Record, and he has been a presenter at numerous NCRA and TCRA meetings.

In addition to being involved in professional organizations, Jackson is a member of the Park Cities Baptist Church in Dallas and was involved with the local Big Brothers program from 1980 through 1987.

“David is one of my local friendly competitors, and he is a big man with an even bigger heart,” said Donna L. Collins, RPR, CRR, CCP, owner of Collins Realtime Reporting, in Dallas, who nominated Jackson for the award. “He received the Texas Court Reporters Association’s top honor, the Distinguished Service Award, 18 years ago and now deserves the Aurelio award. He continues to serve on the Texas Supreme Court committees, proctoring and grading court reporter exams, as well as testifying before the legislature, speaking at seminars, and mentoring others in and outside of the court reporting profession.”

The Aurelio Award is the highest honor bestowed by the National Court Reporters Foundation, the charitable arm of NCRA. The award is bestowed each year to one individual in recognition of their commitment to the court reporting profession and for their selfless actions to give back to the community.