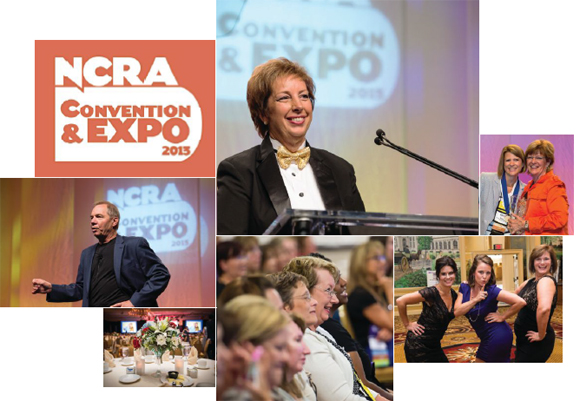 Nearly 1,100 people, including ncra members, court reporting Students, and exhibitors, attended the Association’s 2013 Convention & Expo in Nashville, Tenn., in early August. Incoming NCRA President Nancy Varallo, RDR, CRR, of Worcester, Mass., welcomed attendees during the Premier session on Friday morning, inviting court reporters to set themselves “on fire” with their passion for the profession and encourage young people to enter the profession. Professional speaker Mack Dryden connected with the audience as he explained his seven steps to success.

The four days of convention were packed with seminars on everything from punctuation to technology to networking opportunities to the speed contests and an attempt to beat the standing Guinness World Records record of 360 words per minute set in 2004. Many attendees came into town on Thursday to take part in special all-day workshops held by vendors and the popular Realtime Systems Administrator program. In addition, attendees enjoyed testing new products and hearing about recent innovations in stenographic gear from 45 exhibitors. Other highlights included the association’s annual business meeting, the announcement of 20 newly certified RSAs, and the President’s Casino Royale party, and much more.