A first-time competitor’s experience at Intersteno 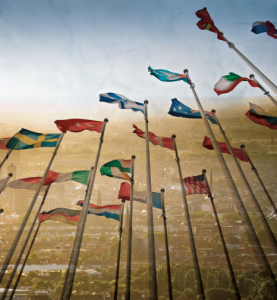 In Paris, July 2011, my husband I were invited to join the Intersteno-sponsored excursion to the French parliament even though we weren’t officially registered (Thank you!). During the tour, two friends of mine, one from NCRA and one from the National Verbatim Reporters Association, both court reporting associations that represent the United States, suggested that I ought to participate in the contests “next time.” (I was there in Paris during the Intersteno Congress, but I was with my husband and, well, it’s Paris! I didn’t sign up for anything.)

The venue for the 2013 Congress was announced as Ghent, Belgium. I agreed to participate in the speed contest (called speech capturing) using my speech recognition engine and CAT software. As many of you know, my tendinitis continues to make writing on the steno machine painful. I’m continuing to report using my voice instead.

In the past, I was like you. What is Intersteno? I’d heard of this kind of nebulous organization that had meetings every two years in pretty cool places — Rome in 2003; Vienna in 2005; Prague in 2007; Beijing in 2009; Paris in 2011 — and I’m a huge fan of travel. This seemed like a really great way to merge my love of travel with my love of court reporting.

Because I made the commitment, I decided to join a couple of Facebook pages , the Intersteno USA and the IPRS (Intersteno Parliamentary and other Reporters Section) page. I was trying to soak up the information that was posted. By the fall of 2012, I’d made my plane reservations. Sergeant Al, as I dubbed my husband, was in charge of finding lodgings and planning our excursions. He’s really a great tour guide.

I worked pretty steadily either reporting or scoping up until the week before the Congress, and I must admit that I was completely unprepared and didn’t know what to expect. I had paid my fees, but I didn’t really understand what was actually going to happen. And let me just say that paying the fees was an adventure in and of itself (foreign wire transfer? Huh?).

We arrived in Ghent on a Friday. I registered on Saturday and then attended the opening ceremony on Saturday afternoon. It was a spectacle! Flags from participating nations borne by their country’s Intersteno representative made their way into the assembly hall and onto the stage.

The organizers spoke, we had entertainment, including a fabulous piano recital by an Intersteno board member, and then there was a group “hike” up the street to the Congress venue (a local school), all those glorious flags waving.

My competition wasn’t scheduled until Monday. Speech capturing is the equivalent of the speed competition at the NCRA and NVRA national conventions. Most of the other countries count using characters per minute and not words, so I was already unsure how things were going to equate. There were six English speakers taking the same speed take: Four Americans writing in steno, one Brit on a Velotype (I still don’t understand that keyboard), and me, the one American taking it down in speech recognition (voice). I was in a separate room from the steno writers for my takedown, but I was able to transcribe with my compatriots (and the friendly Brit), freeing up the proctor from my room to work elsewhere.

The take was a literary, and it was a total of 15 minutes long. The basic format is it’s actually three 5-minute takes, each minute increasing in speed, with a pause of 30 seconds between the first and second take and then between the second and third.

I was able to pick the brains of the other Americans to see how they approached the speed contest. There are differing philosophies amongst the competitors regarding how to proceed. Some write all takes; some write only the last take and, instead, listen to the first 10 minutes and make job defines, hoping that words and phrases will appear in the last 5 minutes.

I was of the “write it all” mindset. I’d never done this before, so why not just ease my way into it? I got all set up — remember, we’re in Europe, so I had to be sure I had my little power inverter/adapter! — and then gave the “go” signal to my proctor. Then I started dictating.

It was over faster than I expected. All of a sudden the audio stopped. I looked up, surprised. I had no idea it had been 15 minutes already. I was in “the zone,” as we say when we talk to students.

After I stopped writing, I switched to edit mode. I relocated to the transcription room and got set up. (I think the group agreed to a quick comfort break.) Then we started to transcribe. The transcription time allotted was two and a half hours. I think I went through my file four times, then spell checked, then went through it again.

Once I packed up, I met with the gang out in the hall to get a sense of how folks felt. I wasn’t overly confident — I was pleased that I transcribed it all the way through to the full 15 minutes — but I was cautiously optimistic.

And then the waiting began. Remember, this was Monday. We were told we would get our grades at our personal log-in account Tuesday. (Log-in account? What? I didn’t remember that! I had to go digging in my email box to find it.) Sadly, they didn’t say when Tuesday. Just like at NCRA convention, there is a team of wonderful volunteers who do the grading, and there were a lot of papers.

We played tourist on Tuesday (deciding against sitting in a couple of IPRS meetings) since I was pretty mentally tired.

But when we got back to our house, since we had free WiFi, I was checking constantly. I don’t know why, though. When I finally got my score, I didn’t have a clue what it meant. It said, “A15, 38 deductions.” What did that mean?

Well, now I knew my score. I felt confident that I qualified to the 15th minute. But, really, what were the 38 deductions? For the whole paper? For the 3-minute section that qualified to be graded? For the last minute? I was clueless. And so we waited. (I know the answer now, however: The deductions were for the 3-minute section that was graded, minutes 13 to 15. But when I first saw that, all I had were questions.)

Wednesday brought a field trip to the European Union parliament. Two buses filled with IPRS folks headed to Brussels and spent the day learning about how the EU reporters do their job and visiting the EU’s visitor center and its amazing display of the history of the EU.

Thursday rolled around and the awards and closing ceremony was scheduled for the late afternoon. We dressed nicely, but some folks got all gussied up. Some of the kids, what can I say but “Wow!” These youngsters were dressed to the nines for this event. In the States, we send our kids to summer camps; some of the competitor countries send their kids to keyboarding camps. Intersteno is a big deal for these competitors.

As I found my seat with the American contingent, the flags were again brought into the auditorium, this time accompanied by bagpipe music. I get chills thinking about it now. As I looked down on the stage, there were easily three 8-foot tables loaded down with medals — gold, silver, bronze — for all of the competitions and for each of the age groupings.

The results were displayed on a big screen for each of the events. There were several young people who got multiple medals. They were like rock stars! We had another piano interlude and then they were ready to announce the results in the section I had competed: Speech Capturing.

At this point, we’re all starting to get a bit nervous — or at least I am. Steno was first. The names were displayed one by one: U.S. NCRA member John Wissenbach won the bronze, and we all screamed! John got up and headed down the stairs to collect his medal and certificate and stand on the podium to get his picture taken. Silver was a young woman from China (who wasn’t at the ceremony). And the gold went to NCRA member Laura Brewer from the United States! Again, more screaming.

Sadly, Laura had had to leave Belgium early for a reporting assignment. Not a bad showing for Team U.S.A.!

And then the speech recognition specialty were announced: Bronze went to Italy. Then silver went to Italy. Then, gold: “Tori Pittman, United States.” I have no clear memory of the next few moments. My husband swears I jumped up and flew down the stairs. He followed me because he wanted to take pictures.

Here’s the thing: I wish every one of you could experience a moment like this. I climbed up to the top step of the podium, bent my head and, like an Olympian, received my gold medal (and a certificate of my results). I looked out into the audience and saw my friends clapping, laughing, and giving me thumbs up. My husband took a picture that captured the moment clearly. In it, I look totally in shock. And I was.

Later, when I got back to my seat, my American friends were all smiles and full of words of congratulations. Folks I hadn’t met during the event came up to congratulate me. My cheeks hurt from smiling so much. In fact, I’m not done yet with the smiling and disbelief.

Intersteno is an opportunity like no other. You get to meet people from around the world, to share ideas and customs, to visit the host country’s parliamentary seat, to eat great food, to see great sights, and to participate in competitions doing what you love to do. There is an Intersteno Congress every two years. Countries bid to host it. Maybe someday the United States will host one. In the meantime, keep your eyes open for where the 2015 location will be, join the Facebook pages, start to practice your literary at high speeds (the last minute was approximately 295 words per minute), and come share in the excitement of the world stage. You’ll never forget it, and you could come home with a pretty nifty souvenir.

Tori Pittman, RDR, CRI, won the 2013 Intersteno Speech Capturing contest in Ghent in July. Pittman can be reached through www.tori-pittman.com.