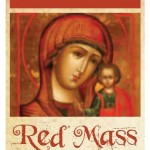 Eight years ago, the Bexar County Court Reporters Association participated in the Red Mass at the San Fernando Cathedral in San Antonio, Texas, for the first time. But the Red Mass itself is a tradition that is anything but recent.

According to Edward R. Tiedebohl, who was the president of the Catholic Lawyers Guild affiliated with the Archdiocese of Chicago, the Red Mass was first celebrated in Paris in 1245 and was established in England starting in 1310. The Mass marked the opening of the court term. Since the priest wore red robes, the bench and bar wore red to match, a tradition that has continued today.

Celebrated in October, the purpose of the Red Mass is to ask for divine “light and inspiration to the lawyer in pleading, and to the judge in adjudicating,” according to Tiedebohl. But the Red Mass Planning Committee in San Antonio, Texas, recognized that “our legal community includes all who have roles and are important in the adjudication of the law,” said Sr. Grace Walle, the campus minister at St. Mary’s University School of Law in San Antonio.

After Mary Berry, RMR, CRR, an official in San Antonio, attended one of the Masses, she wrote to Walle to tell her that the experience gave her a new perspective. For 15 years, Berry had an office on the fourth floor with windows with her desk situated so she could see the cathedral. After attending the Red Mass for the first time, Berry said, “I thought of the multitude of cases we hear daily, the lives of those litigants who come before us, the friction between the families, the children who have been abused. I thought of the arguing and the fighting we hear in the courtroom day after day, the tears that are shed, the sadness all around me. How could two different buildings be so close together, yet so far apart?

Berry added, “I thought of the reflections I heard at the Red Mass that evening, the judges who were there who I’ve seen make some very tough decisions, the attorneys who have come before me advocating strongly for their clients, the law professors in their beautiful robes, the law students who will someday be successful lawyers. For just a brief period of time, we were all together, not in a courtroom where everyone is fighting with one another, but in the Cathedral worshiping together. For the first time ever looking at the Cathedral that morning, I felt this beautiful connection between the two, and it brought me a sense of true joy and inner peace, and it still does today.” After a few phone calls between Walle, members of the planning committee, and officials with the Bexar County Courthouse, San Antonio court reporters became more involved in and supportive of the Mass.

The Mass begins with a procession from the courthouse to the church with representatives from branches of government, the courts, students, faculty, and administrators at St. Mary’s, and the bar, paralegal, and court reporter associations, each holding a banner to represent their group, an idea that came from Linda Hardberger, the wife of former Chief Justice Phil Hardberger. Walle says that the banners have “generated more involvement.” Recent BCCRA representatives who carried the banner are Cindy Hyatt, Kim Tindall, RPR, and Angie Lozano. Berry has represented the Texas Court Reporters Association twice.

In San Antonio, the Red Mass was revived in collaboration between the School of Law at St. Mary’s University and the Archdiocese of San Antonio. St. Mary’s holds the distinction of being the only Catholic law school in south Texas, and the San Fernando Cathedral, the seat of the Archdiocese, is practically across the street from the Bexar County Courthouse. The Mass is open to people of all faiths and the 300-capacity cathedral is standing room only. This year in San Antonio, the Red Mass will be celebrated on Oct. 9.

The Red Mass has been celebrated in other locations around the world as well. Kay Gittinger, RPR, attended the service in Trinidad. Gittinger said that the service is called “The Ceremonial Opening of the New Law Term” in Trinidad, but it stems from the same history. Walle has also met several Supreme Court justices who have attended the Red Mass in Washington, D.C.

In San Antonio, the archbishop normally presides over the Mass, although one of the judges will have the opportunity “to reflect on the Red Mass and … to pause about the importance of praying for wisdom in dispensing justice,” said Walle. She added, “I think it is important to hear from people who are involved day to day.”

“It is inspirational to listen as they speak about their lives, their families, their careers, and how God has made an impact in daily professional life,” Berry says.

The Red Mass “is an opportunity for all to come together in prayer for the common good,” Berry continued. “I leave the Red Mass with a feeling of peace and gratitude in my heart. We are not in a courtroom or a deposition conference room, but we come together as a legal profession in a place of worship. It is there at the Red Mass where I experience a feeling of true joy and much happiness.”

Megan Rogers is NCRA’s Communications Assurance Specialist. She can be reached at mrogers@ncra.org.

More from ReportingMore posts in Reporting »