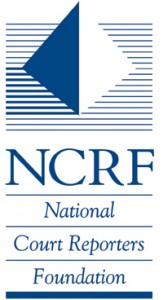 Donations to the NCRF Angels Drive and other fundraising efforts support a variety of activities funded by the Foundation, including the $2,000 Frank Sarli Memorial Scholarship, which has benefited court reporting students for nearly two decades.

“This scholarship helped get the ball rolling for my career. I used it to assist with the purchase of my professional steno machine and software,” said Justine Kiechel, from West Chester, Pa., a graduate of the College of Court Reporting in Hobart, Ind., and recipient of the 2014 scholarship.

“Getting started can be expensive. The scholarship definitely made it a little less challenging in that area. It was also an honor to list it on my resume,” added Kiechel, who now works as a freelance reporter in Delaware.

In a letter of thanks to NCRF, 2012 scholarship recipient Cynthia Garcia of Moreno Valley, Calif., a graduate of Sage College Court Reporting School in Southern California, stated that she also used the funds to help purchase a professional steno machine and software. In addition, she noted that being named a recipient helped motivate her to practice more while also building her dictionary.

“One day I hope to be in a position to help students achieve their goals just as [NCRF] has helped me,” Garcia wrote.

Recipients for the scholarship are chosen based on a number of criteria, including enrollment in an NCRA-certified court reporting program, passing at least one of the court reporting program’s Q&A tests at a minimum of 200 words per minute, having a grade point average of 3.5 or above, demonstrating the need for financial assistance, and possessing the qualities exemplified by a professional court reporter, including attitude, demeanor, dress, and motivation.

NCRF’s Frank Sarli Memorial Scholarship honors the late Frank Sarli, a court reporter who was committed to supporting students at the highest level of their learning curve. Sarli, who was studying to become a professional pianist, turned to a court reporting career when he could no longer afford the tuition to music school. During his career, he opened Accurate Court Reporters in Orlando, Fla., Orange County’s first independent court reporting firm, and was a founding member of the Florida Shorthand Reporters Association. Sarli also served in numerous roles at the national level, including as a director for NCRA. He was also the first Floridian to earn NCRA’s esteemed Distinguished Service Award.

“There’s really no reason a student shouldn’t apply for this scholarship. It’s a simple application process, and it can contribute to your future in the court reporting profession,” said Kiechel.

Later this winter, NCRF will open the application process for students to apply for the Frank Sarli Memorial Scholarship, and the winner will be recognized at the 2015 NCRA Convention & Expo., being held in New York City, July 30 – Aug. 2. Learn more about how you can help support the Foundation’s work including the Frank Sarli Memorial Scholarship.

Published in NCRF and People