Making the connection: Networking at the NCRA Convention & Expo in-person and online 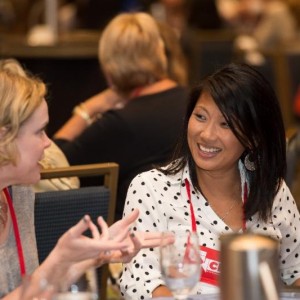 One of the opportunities the NCRA Convention & Expo provides is networking, and this year will be no exception. Many events built into the schedule facilitate and encourage networking. Social media will also allow members who are not attending to still participate.

The NCRA Convention & Expo kick offs with the Opening Reception on Thursday evening. Other social highlights are the Premier Session on Friday morning, the Awards Luncheon on Saturday afternoon (ticketed event), and the President’s Party on Saturday evening (ticketed event). While these large events can be a bit intimidating, some strategies for can make networking more manageable. “The opening receptions are especially ripe for networking as most attendees are just as eager to break the ice as you are,” said Katherine Schilling, a student at West Valley College, Saratoga, Calif.

Sometimes, it’s helpful to get the lay of the land first at large events. “I save some time at the beginning or end to just stroll around the outer perimeter of the room in a large setting and smile and make eye contact. Often I will be approached by someone, and we will start a conversation,” said Doreen Sutton, RPR, NCRA Secretary-Treasurer and a firm owner from Scottsdale, Ariz. Others like to jump right on in. “Keep moving,” said Debbie Dibble, RDR, CRR, CRC, who is on the NCRA Board of Directors and a freelancer from Woodland, Utah. “Look for people in small groups or alone and ask how they are enjoying the convention. Ask them what is new for them. Chances are they have noticed or learned something you haven’t and it will double your value.”

Don’t overlook the tried-and-true methods of breaking the ice. “Tell a funny story,” said Mirabai Knight, RDR, CRR, CRC, a CART captioner from New York, N.Y. (Ask her about the time she captioned Robert Mugabe!) Another old standby is to ask people questions about themselves. “Asking where someone is from at the national-level events is a foolproof way to get the conversation rolling. It’s a fun reminder for every one of just how expansive the industry is,” said Schilling. Pinpointing someone’s hometown can also be helpful for firm owners. “Even a simple, ‘Where are you from?’ can turn into a, ‘Can I have your card? I’ve been looking for a reporter in that area.’” said Dibble. Make sure, however, that the conversation and connection are genuine. “They have to prove to me a love for the profession over their own personal gain. Once the trust is established, work will be referred to that firm,” said Linda Fifield, a firm owner from Boston, Mass.

At seated events, like the Awards Luncheon, it’s important to sit with some new faces. “The best networking will only happen when you get outside of your comfort zone,” said Schilling. Sometimes it’s helpful to be strategic with those new faces. “I tend to be around the speed and realtime competitors since most of the time agency owners approach them from having old relationships they share or are currently working together, etc.” said Chase Frazier, RPR, CRR, a reporter from Murietta, Calif.

The Convention & Expo also offers several specialty social events, including the National Committee of State Associations Reception on Wednesday evening, the NCRF Angels Luncheon on Friday afternoon, and the Legal Videographer Reception and CART and Captioning Reception, both on Friday evening. “The Angels Luncheon is a great opportunity to mix with people in the same room who share the same passion for the profession and are willing to donate dollars to NCRF,” said Fifield.

These events also provide a good opportunity to dig for details about a specific field. For example, “ask what their favorite sort of captioning is,” Knight suggests, and follow up with more specific questions, including “What do you like about it?”

Taking advantage of the Expo Hall

Don’t forget about using the Expo Hall as a vehicle for networking. “I find that going to visit the vendors allows me to meet people with the same interest in the technology. Asking questions of the vendor and the other reporters helps build bonds,” said Fifield. After establishing this bond, use technology as a way to go to the next step in the conversation. “Ask about their favorite new gadget or software feature,” said Knight. The Expo Hall is open Thursday through Saturday, with coffee breaks with the vendors on Friday and Saturday morning. The Opening Reception is also held in the Expo Hall, providing another opportunity to mingle with vendors.

Convention can provide some unique networking opportunities for students. The Student Seminar on Friday and Saturday builds in a meet-and-greet between students and the NCRA Board of Directors and includes the Premier Session, Annual Luncheon, and time in the Expo Hall. “Don’t be shy! Approach people that you may want to meet or that you believe have something to teach you,” said Dibble.

For students, there are some differing thoughts on introductions. “Professionals are always curious about what speeds students are at, so introducing yourself as ‘Hi! I’m a ___ WPM student at ______ steno school.’ can be a good icebreaker,” said Knight. Dibble added, “Working reporters want to talk to you and answer all your questions,” Schilling, however, found that conversation can get a bit stymied that way. “I’ve made it a habit not to introduce myself as a student to working reporters. This can quickly pigeonhole you into the usual ‘So how far along are you in school?’ trope and completely cut you off from learning about the inside scoops that you are really there for.” She suggests a different tactic: “I remember meeting a notable realtime writer at a national convention where I started off by telling him just how much I loved his books. Thanks to that, I’ve gotten onto subjects that are normally relegated only to established reporters.”

Another way to get into these industry-related questions is to take note of who you’re talking to. “Networking isn’t so much about meeting a future employer, although this happens too, but about learning about the breadth of skills, experiences, and lives that encapsulate this industry,” said Schilling. She added: “I’ll typically try to connect with all sorts of reporters out there, not just those in the field that I’m aiming for.” Knight pointed out that it’s a good idea to have a basic knowledge of the industry, especially when talking to attendees from a variety of backgrounds: “If you talk to someone who doesn’t do depositions, whether they’re officials, broadcast captioners, or CART providers, let them know you’ve read up at least a little bit on what they do.”

For new professionals, make sure to have business cards on hand (although this is an important tip for everyone). “When there are lots of folks in a room or at a convention, it is easy to forget names and/or faces; but when you have something tangible to remember them by, the next time you have the opportunity to interact with that individual, you can place them and where they live and where they are in their court reporting journey,” said Sutton. She added that she often takes the time to write a little something about that person on the card for future reference.

Social media can be a beneficial tool before, during, and after the Convention & Expo. “Facebook is the easiest way I can check to see who else will be attending. I’ll make note of which stenebrities that I’ve been dying to meet will be present and then keep my eyes peeled for them on the attendee list and convention floor. It’s also a good idea to shoot them a quick message on Facebook in advance, letting them know that you’ll be attending and that you look forward to meeting them there,” said Schilling. There is an event page for the 2016 NCRA Convention & Expo on Facebook to help scope out who is attending.

Once on site, social media can also be used as an icebreaker. “I’ll sometimes use the hashtag just as a general introduction at the start of the conference,” said Knight, suggesting a sample tweet: “”Hey, captioners at #NCRA16! I’m Mirabai, a CART provider from NYC. Anyone want to talk shop? Drop me a tweet, or just come up and say hi!”

NCRA will be posting updates on Facebook and Twitter using #NCRA15, the official conference hashtag. These posts will cover information for attendees as well as breaking news for members who are keeping up with the event from home. Attendees can help share the news. “When I’m actually attending a conference, I’ll use the hashtag when I’ve just seen a particularly good talk and want to tweet about something I’ve learned from it, or when taking photographs of something cool at the conference venue,” said Knight. “I usually make at least five posts a day on the week of convention — and no, I don’t apologize,” said Sutton.

Attendees can also get up-to-date information using the NCRA Convention app. “The app is great for last-minute information, where things are happening, updates on events, where coffee is, shorter lines, and finding out where the party is goin’ on!” said Dibble.

While business cards are still an invaluable tool for connections, social media plays an important role after the convention is over. “Friend new people you meet on Facebook and LinkedIn, and stay aware of opportunities to offer your services,” said Dibble. “Friends tell friends who the best reporters are to cover their jobs across the nation … and the world.” Sometimes a good old-fashioned email is a good way to turn a connection into a relationship; the key is just to follow up after the event. “After they learn that I’m a student, most court reporters add a quick, ‘Let me know how school goes,’ which I like to take seriously. It provides the perfect reminder to contact them periodically with some good news,” said Schilling. And Fifield continues to use social media as an industry tool: “I use hashtags on my FB and Twitter pages to draw people to court reporting, all things Boston, etc.”

No matter how intimidating networking can be or where each attendee is in his or her career, the NCRA Convention & Expo has a special value for court reporters. “Especially in an industry where so few regular people know or appreciate what we do, court reporters love the chance to boast about their latest courtroom escapade or a particularly trying deposition,” said Schilling. Knight agrees: “There aren’t many places where you can geek out about steno all day in the company of people who actually know what you’re talking about, so make the most of it.”

Published in Career and Events