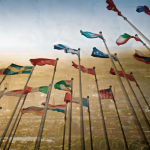 NCRA members dominated the 2015 Intersteno speed and realtime competitions during the organization’s 50th Congress held July 18-24 in Budapest, Hungary. The Congress drew more than 500 attendees from around the world.

Wissenbach took the top spot in the realtime speech capturing event, seniors division, followed by Schuck, who took third in the competition, and Pickard, who grabbed the fifth spot. Also earning honors in the competition were Brewer and Darrenougue, who tied for sixth place. Frazier came in eighth in the realtime event. It was Frazier’s first time competing at an international level. Urlaub also secured the 12th place spot, and Pittman ranked 30th. A total of 86 contestants participated in the event. People competed in 10 different languages for the realtime event.

In addition, Shuck also ranked 10th out of 77 participants in the audio transcription senior division.

The results lists are based on age and method.

“Competing at Intersteno is a humbling experience,” said Schuck. “You are competing with writers from all over the world using various methods, in various languages. In Budapest, there were 11 different languages.”

Schuck last competed in the Intersteno realtime competition in Paris in 2011, taking third in the world.

“It’s a heartwarming and eye-opening experience to be amongst reporters of all different nationalities. There are kids competing as young 10 years old, and they’re good at their skill,” she added.

The Intersteno competitions follow two parallel streams: to take down a text dictated at increasing speeds or to enter texts and data process with a computer. In either case, speed and accuracy are the factors for success.

In the speech capturing event, competitors take and transcribe a 15-minute dictation at progressively increasing speeds. At least three consecutive minutes of dictation must be transcribed successfully to qualify in the contest. The same text is translated in all the languages and prerecorded for the event.

The realtime event requires competitors take an eight-minute dictation with speed increasing every minute, using any kind of technology. At the end of the eight minutes, the transcription is delivered without any correction on a USB stick delivered to the jury. Submissions are considered valid if at least three successive minutes are successfully written.

In the audio transcription event, strategy is important. Competitors transcribe a digitally recorded dictation in their mother tongue. The competitors have only 10 minutes to transcribe a 15-minute recording of 215 words per minute dictation. Competitors may speed up or slow down the recording or may decide to transcribe for nine minutes and edit for one minute. The goal is to complete the most work in the most accurate fashion possible. Seventy-seven people competed in the audio transcription event.

A final combined list that consists of individuals who participated successfully in at least three of Intersteno’s organized competitions is also published. The rankings are based on the number of competitions in which each competitor is successful, and the combined sum of the results is calculated by dividing the rank by the total number of successful competitors in each event. Shuck earned the 31st spot on the list.

Intersteno’s 2017 Congress will be held in Berlin, Germany.

Editor’s note: This article has been revised from its original version for a more accurate description of the events.