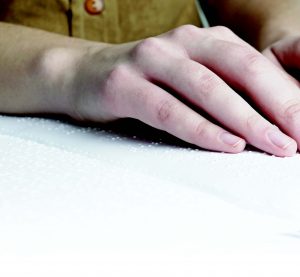 It’s difficult to determine exactly how many people in the United States are deaf-blind because the definition for deaf-blind varies from person to person. The Gallaudet University Library cites two sources: a 1980 national study by the Department of Education that estimated 42,000 to 700,000 people and a 2008 paper by Barbara Miles for the National Consortium on Deaf-Blindness that estimates more than 10,000 children (birth to 22 years) are deaf-blind and 35,000 to 45,000 adults are. Altogether, this is less than 1 percent of the population of the United States.

Even within the group, there is a variety of conditions. Some people classified as deaf-blind may have had no hearing or visual ability since birth and some may have been slowly losing one ability or the other, and the loss could be due to a variety of reasons. Deaf-blind could also mean low visibility or low hearing rather than no ability at all. Because of these characteristics, CART providers and captioners working with this population need to be flexible and tailor their services for the individual client.

There are two main questions to consider when choosing equipment for a client who is deaf-blind: 1) What is the client’s visual ability? 2) If the client cannot see at all, does the client read Braille?

“There are a lot of conditions that involve both vision and hearing loss, but most people who have them are hard of hearing and low vision rather than completely deaf and completely blind,” says Mirabai Knight, RDR, CRR, CBC, CCP, a captioner in New York, N.Y. Knight says, “Giving people a tablet with the captioning on it so that they can put it close to their eyes, asking them which foreground and background colors they prefer, and asking which font size they prefer can help a lot.”

Debra Cheyne, a CART captioner in Sherwood, Ore., provided captioning for a juror who has limited visual and audio abilities in November. Cheyne connected a monitor to her equipment and arranged for white text on a black background using Arial font that was sized as large as possible; each letter was about two to three inches tall. In some cases, such as with a client who experiences tunnel vision, it may be more helpful to have smaller text in the middle of a screen.

Clients who were born blind or deaf-blind are more likely to read Braille, although this is not always true. Kolby Garrison, a court reporting student at College of Court Reporting who is blind, explained that Braille is not taught as often anymore because people are more likely to use screen-reader software on a computer. Clients who can read Braille may have a refreshable Braille display that connects to the client’s computer (or other devices) and translates English text from a screen-reader program into Braille letters. Garrison, for example, prefers a 40-cell display because it’s easy to carry around along with her other equipment, although the size ranges from 14 to 80 cells. Some displays also come with a keyboard so the user can input information in Braille, which Garrison prefers because then she can use the display with other devices. The American Foundation for the Blind lists more than a dozen screen-reader programs on their website; JAWS is the most popular. Even for clients who read Braille, their fluency level determines how quickly they will be able to follow along with the text. It is important for a captioner to keep in mind that their client may not be able to read as quickly as the speaker is talking, even if the captioner can keep up.

Depending on the method of caption delivery, the client may be able to control the display settings. Jennifer Aggeler, a broadcast captioner in Kneeland, Calif., who has provided on-site CART for clients who are deaf-blind in the past, noted that the technology has changed quite a bit over the years and suggests using the free applications Google Docs or Microsoft Word Online. “The CART provider, after creating an online text document and setting it to ‘share,’ simply writes realtime text directly into the document on their computer while the viewer simultaneously has the same document open on their computer and reads at their own pace,” Aggeler said.

Text on Top is a paid option for delivering captions to a client who is deaf-blind. Sander Pasveer, who developed Text on Top, explained, “When reading from a screen is not possible because of a visual impairment, Text on Top comes with an application called Text on Top Vision. An individual user can read the text from his or her own laptop or tablet and adjust the appearance to his or her own needs. It also allows the user to scroll backwards.”

For clients who are using refreshable Braille devices, the technology may need to be adjusted a bit. Nick Wilkie, CEO at StreamText.Net, another paid option for delivering captions, explained that screen readers are set up to work best with static text, so the dynamic text of captions makes that tricky. StreamText.Net has a workaround that allows users to keep the cursor at the bottom of the text.

Since Cheyne worked with her equipment connected to a monitor, she also removed all of the distracting information from the software so the screen displayed only the captioning feed. She also arranged to have as many lines of text available as possible with a continuous flow. Aggeler also adjusts her format slightly for a remote CART job by removing chevrons and identifying speakers with names, ensuring all text starts on the left, using true dashes rather than two hyphens, and having single spacing.

Many on-site and remote CART jobs with a client who is deaf-blind require the same preparation for a client who is deaf or hard of hearing. Garrison suggested talking with the client about what the job would entail and provide as much detail as possible. She also stressed the importance of testing the equipment ahead of time, which Aggeler echoed, with the reminder that everyone is different and the way that everyone does or accomplishes things is different.

However, Cheyne often provides captioning in the Oregon court system, and since the court staff is usually not made aware of the client’s particular disability, she may not get many details before a job. Since Cheyne needs to be prepared for any situation when she arrives in court for an assignment, she prepares for the factors she can control, such as being well-rested and packing water and small snacks. She does, however, emphasize the importance of asking for an ergonomic chair if possible to make sure her back is supported throughout a potentially long day.

All other duties as assigned

Sometimes, providing captioning for clients who are deaf-blind involves a few extra responsibilities.

Cheyne said it is particularly important to make sure, when appropriate, that whoever is speaking provide a verbal account of any visual representations, such as drawings on a whiteboard. This information will most likely need to get to the client through the realtime stream unless the client has alternative technology; Cheyne’s client used an ELMO document camera to scan written documents and project reverse imaging onto a second monitor. Depending on the situation, the captioner may also need to be prepared to include side conversations or other language so the client can fully participate with the people around them, although Aggeler pointed out that any captioner should be used to providing sound description parentheticals. While some clients may want to get extra information like how many other people are in the room, others may not. “Know your client,” Aggeler said.

Cheyne also pointed out that the captioner may also need to consider physical logistics, such as making sure a client who is a juror is sitting at the end of a row so other jurors aren’t distracted by the captioner’s screen but also keeping in mind where the plug is located (and don’t forget to tape down those cords). If the client has a service animal, where the animal sits may affect where the captioner’s equipment is placed as well. These other considerations highlight the importance of being flexible with clients who are deaf-blind to make sure their experience runs smoothly.

The importance of accessibility cannot be understated. With a little extra knowledge and preparation, captioning for a client who is deaf-blind can be similar to providing captioning for any other client. At the same time, being flexible with clients who have unique needs can also serve as an important reminder. As Aggeler put it, “CART is best when it includes an individual approach, something tailored to the consumer, instead of a one-size-fits-all approach.”

Megan Rogers is NCRA’s Communications Assurance Specialist. She can be reached at mrogers@ncra.org.