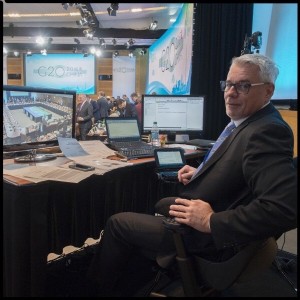 What the International Monetary Fund’s verbatim reporters do on a regular basis for executive board meetings has caught the attention of another one of its members. Already well known to authorized users at the Fund, China requested the reporting department to provide realtime verbatim services when it hosted the G-20 meetings this year.

Using our stenographic machine shorthand skills, Marita Yslas, RPR, and I send our verbatim text through a software program on computers or iPads. The encrypted and password-protected text is streamed simultaneously with the meeting. Twenty users were connected during February’s meeting in Shanghai and here at headquarters.

Tao Dong, a lead organizer of the China 2016 G-20 team and liaison with the Fund, said: “The G-20 team was very impressed by the realtime streaming transcription. We benefited indeed from the comprehension of the speeches for the governor and other Chinese meeting participants. The magic iPad app allowed users’ interaction by scrolling through the text. We were able to comprehend and retain much more of what we read and heard, and what we simply missed.”

This isn’t the first time the reporting department’s innovative techniques have been called upon in an international setting. In addition to providing the service to the deputies of the International Monetary and Financial Committee in various locales, the G-20 Chair for the 2010 meeting in Korea also requested the service. The Korean team wasn’t sure what we were offering when we suggested it for their meeting held in Washington that year. Within five minutes after meeting, though, the team leader announced, “You’re coming to Korea! We need this ‘real timely’ for all our meetings.” His misnomer may be close to reality.

The Fund’s Secretary to the Board, which is the department I work in, expects to again ask for verbatim realtime services to be provided by IMF reporting staff in Chengdu, China, in July and at the Leaders’ Summit in Hangzhou, China, in September. In Korea in 2010, I covered the private dinner of the Leaders’ Summit, sitting behind President Barack Obama. In my own mind, that made it the “G-21,” as I was present as a leader in stenographic realtime provision.

Patric Martin is an official reporter from Bethesda, Md., who works for the International Monetary Fund. He can be reached at pmartin@imf.org.

G-20 (also called Group of Twenty) is an international forum for the governments and central bank governors from 20 major economies.

The International Monetary and Financial Committee (IMFC) advises and reports to the IMF Board of Governors on the supervision and management of the international monetary and financial system, including on responses to unfolding events that may disrupt the system. The IMFC usually meets twice a year.

Published in Career, People, People in the News and Realtime