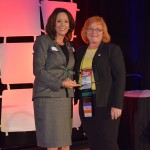 The award is presented by the National Court Reporters Foundation (NCRF) and is given to a working court reporter with more than 25 years of experience who has given back to the profession and to the court reporting community with no expectation of any reward.

A captioner for most of her career, Graves, who owns Caption First, Inc., has given tirelessly to those in the captioning community for most of her career. She has trained, mentored, and encouraged many court reporters to transition to the field captioning. In addition, Graves has long been active volunteering for a number of committees and positions with both NCRA and the Colorado Association of Court Reporters (CCRA). She also served on the Advisory Committee for the Ad Hoc Rules and Regulations for the Colorado Commission for the Deaf and Hard of Hearing.

A member of NCRA since 1977, Graves served on the Association’s Board of Directors from 2010-2013. She has also served on NCRA’s CART Task Force, including as chair for two years. She is a founding member of the Realtime Certification Committee. She has also served in a number of officer positions for CCRA and is the organization’s immediate past president.

Graves has worked as a court reporter in New York, South Carolina, and Illinois, and she has more than 25 years of experience providing CART and captioning services across the United States and around the world. She has also taught CART at the local and national levels and is widely published.

According to NCRA member Heidi Thomas, CRR, RDR, CRC, a CART and broadcast captioner from Acworth, Ga., who was one of many to nominate Graves for the award, she has been instrumental in bringing CART captioning to people in countries around the world, as well as to those in the United States. Despite the challenges she’s faced with low vision, she’s not slowed down in her efforts in providing communication access.

“Pat has a heart of gold, and the drive and determination it takes to make the many contributions she’s made throughout her 25-plus years in the captioning and court reporting industries,” Thomas wrote in her nomination.

“What rings strongest for me when I think of Pat is her ethical values,” wrote NCRA Past President Nancy Varallo, RDR, CRR, owner of The Varallo Group, Worcester, Mass. “Pat was an early pioneer in the development of NCRA’s Code of Ethics for providing realtime in a judicial setting, helped developed the CART Provider’s Manual and subsequent publications, and speaks frequently about privacy of client information.”