Nominations for Fellows of the Academy of Professional Reporters due Dec. 31 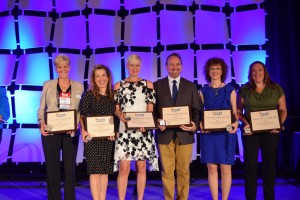 “To be nominated as a Fellow is one of the highest recognitions by your peers for contribution to our profession,” said Mary Cox Daniel, RDR, CRR, CRC, a freelance reporter from Las Vegas, Nev., and chair of CAPR.

“Being nominated means a reporter has gone beyond mere membership in NCRA but has made significant contributions to our profession over an extended period of time. I consider becoming a Fellow a lifetime achievement award,” added Daniel, who was nominated in 2011.

Established in 1972, NCRA’s Academy of Professional Reporters recognizes a nominee’s outstanding and extraordinary qualifications and experience in the field of shorthand reporting. Candidates are required to have been in the active practice of reporting for at least 10 years and to have attained distinction as measured by performance, which includes publication of important papers, creative contributions, service on committees or boards, teaching, and more.

“A nomination as a Fellow is one of the highest recognitions our profession bestows, encapsulating an acknowledgement by your peers of your dedication to court reporting in all ways — from steno writing professional, to advocate of our profession, to being a leader,” said Kimberley A. Neeson, RPR, CRR, CRC, a freelancer and firm owner from Toronto, Canada, who was nominated in 2016.

“The nomination as a Fellow of the Academy of Professional Reporters acknowledges the nominee’s hard work, commitment and ethics to the profession of capturing the spoken word. While many certifications acknowledge one’s skill, a nomination as a Fellow is recognition by the court reporting and captioning community of the nominee’s long-standing contributions to our profession. It is truly an honor,” she added.

“For me, nomination was affirmation and recognition from my peers that I’d had accomplishment in my chosen profession. It was profound. It means that you have served and performed to advance the profession, and that service is acknowledged and honored,” added Jason Meadors, RPR, CRR, CRC, a freelancer and firm owner in in Fort Collins, Colo., who was nominated in 2011.

A Fellow’s support of the profession can be seen in his or her activity in professional associations at the state or national level or through a number of other venues. If you know of such a person who has not been named to the Academy, now is your chance to recognize his or her contributions to the profession. View the full criteria and download a nomination form at NCRA.org/Fellows. For more information, contact Cynthia Bruce Andrews at candrews@ncra.org.