Tools of the Trade

Here are the answers to the questions court reporters and captioners most want to ask about the steno machines on the market.

Both wired and wireless.

The Passport Touch is compatible with all CAT software.

What translate function does it o­ffer?

The Passport Touch includes a patented automatic rewriter that allows you to adjust your keys after the job, and apply those adjustments to jobs that have already been written for improved translation.

What is the size of the display?

What is the range of key adjustability?

The anti-stacking, anti-splitting, shadow-tracking, and key-position scanning on the Passport Touch are patented. Anti-stacking is adjustable from 0 to 100. Shadow-tracking can be turned on or off.

Yes. The Passport Touch includes a full-featured capacitive touch screen with a myriad of display options. The patent-pending hideaway display disappears into the writer when you don’t need it. A built-in tablet stand is available when the display is open.

Yes. The Passport Touch has a built-in microphone, a microphone port, a headphone port, and a monitoring mode. A large number of context-sensitive tutorial videos with sound are also integrated into the machine.

Battery life is dependent primarily upon screen brightness. At medium brightness, you can expect about 12 hours per charge.

What backups are provided?

In addition to the standard data (steno, English, and audio), raw steno fi les are also backed up. (Raw steno fi les are much larger than standard steno fi les and are what make it possible for users to adjust their keys after jobs have ended, apply the readjusted values to jobs they have already written, and retranslate the jobs using the new adjustments.)

Additional comments: The Passport is customizable with more than 100 different skins available. 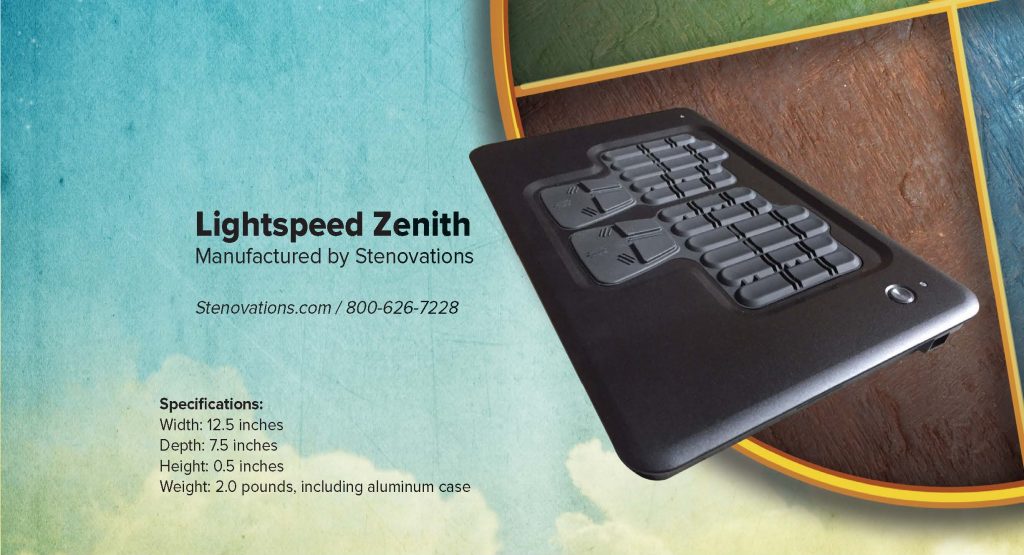 Either. It can be connected via USB cable, which transmits data as well as provides power. It may also simultaneously be connected to a second computer or smartphone via Bluetooth.

What translate function does it o­ffer?

The range of pressure on each of the 121 sensors for threshold settings is 0 to 1023. Pressure is read on each of 121 sensors 60 times a second. The Zenith application software on the computer uses that information to address any reporter-induced stacking.

Yes, in multiple ways. The Zenith software allows redefining a key to be a steno letter, a combination of letters, or a macro that generates up to four strokes. The writer has additional keys below the vowels. For example, one of those could be defined as a question or answer bank.

Again, the writer has 121 sensors, and each is fully definable. Multiple sensors are under all the keys as well as under the cracks. Crack sensors can be redefined or disabled. For example, redefining the sensors under the crack between the E and U as an E virtually widens the E, moving the sweet spot to actuate both keys to the right. Also, either of the initial S keys or the crack sensor between them can be redefined as a combination of keys or a macro containing up to four strokes.

These are just a few of the possibilities.

32 GB on the SD card in the writer itself.

On a connected computer, data is stored on the hard drive by default. Simultaneously, additional backup may be sent to any removable storage media inserted into the computer.

Additional backup may be had by simultaneously connecting via Bluetooth to an Android app, StenAudio, on a smartphone or tablet. Said app creates a time-stamped steno file, plus records an audio file with time stamps. Said files may thereafter be transferred to a CAT system and translated into a text file with the audio synchronized.

Also, if you have your CAT system installed on two computers, you can write to both simultaneously, that is, one computer connected via USB cable and the other Bluetooth.

Additional comments: The Lightspeed Zenith does not require the use of a tripod. It can be operated while placed on your lap or on a table or anywhere that’s comfortable for you. In addition, though it does not have a screen, since it is thin and flat, it can be used while placed on the keyboard of a laptop computer.

Also, with the Zenith writer you can define a key or key combination as a “shift,” “Alt,” or “Ctrl” key. You can keep it depressed while you stroke other steno outlines. When these keys are depressed, you can access a different keyboard layout. For instance, the keys can be defined as numbers or number combinations. A single key can be one letter or multiple letter or a single stroke or multiple strokes, up to four strokes, and that stroke can be sent to the CAT software for translation.

The Luminex can be both wired to the computer with a USB cable or wireless, using Bluetooth.

The Luminex supports both USB and Virtual serial port. Any software that can output to Stentura protocol over serial port can connect to the Luminex. The entire USB protocol description along with sample code is available for download from Stenograph.com to enable any developer to add Stenograph’s writers to their software.

What translate function does it offer?

Easily reachable adjustment wheels on the left and right of the machine control keyboard depth of stroke and tension. Also, there are software keyboard adjustment settings: general keyboard sensitivity, split/stack adjustments, as well as fine-tune adjustments of individual keys.

Users have the option of loading any image of their choice for the writer’s splash screen as well as changing the font size and the color of text.

The writer can record high-quality audio in ADPCM or PCM codecs. There are also options for monitoring live audio with a headset and auto pausing of the audio during lulls in testimony.

A fully charged battery will last approximately 17 to 19 hours.

Any keyboard modifications, such as keytop changes, are done in a controlled factory environment to assure precision and reliability.

Blaze professional and student models do not support wireless features.

ProCAT writers are compatible with all current CAT systems. The protocol for our realtime writers is available to everyone free.

RTF dictionaries are preferred; however, ProCAT can convert native dictionary formats from all popular CAT systems.

What translate functions does it o­ffer?

ProCAT Xpression and Impression o­ffer a full range of realtime translation capabilities, such as those found in popular desktop CAT systems. The features include: AutoBrief using Mark Kislingbury’s theory; intelligent prefixing and suffixing; automatic number conversion; conflict resolution; a/an resolution; stack detection; drag-n-drop resolution; wireless feed to iPad app; dictionary global; and automatic punctuation placement. Also, when using Bluetooth, the writer will reconnect automatically when you go out of range, such as in chambers, and the Xpression and Impression have realtime hold for o­ff-the-record proceedings. ProCAT’s writers allow users to export realtime transcript to RTF (Microsoft Word), PTF (LiveNote portable transcript format), and text (ASCII), as well as allowing users to export transcript and audio to other popular CAT systems.

ProCAT writers o­ffer a 7-inch color LCD panel with LED backlighting and true touch sensitivity. All features are accessible by simply swiping or touching the screen or icons.

ProCAT writers allow the user to set the depth of travel ranging from nearly 1.5 mm to 19 mm. ProCAT writers have two independent processors to capture and translate keystrokes. This feature reduces the risk of stacking and o­ffers additional reliability.

Users can define fonts size; choose from English, steno, or mixed display options; use colors and font emphasis for Q and A; show AutoBrief window; and adjust the English/steno window size by tapping and dragging.

Does it offer any audio features? If so, what are they?

ProCAT Xpression and Impression o­ffer automatic high-definition audio recording. The recorded audio is compatible with all CAT systems and synchronized with its RTF-formatted transcript. The writers also have audio recording boost and volume control, as well as an audio loopback that enables the user to wear a headset or earbud for amplified audio in situations where the acoustics are poor. The audio is recorded only when it is on-the-record. It will not record o­ff-the-record discussions, and they will remain confidential.

In addition to the standard key options such as wide keys, ProCAT o­ffers raised vowel keys.

Additional Comments: ProCAT writers use the Windows operating system, which will enable our clients to easily integrate their writer into the PC environment. The Windows environment makes it easier for us to deliver updates to our clients. Additionally, ProCAT technicians can view a client’s screen remotely and o­ffer technical assistance and training. The ProCAT WriterSync offers seamless synchronization between the writer and PC. WriterSync can convert a personal dictionary and upload it into the writer as often as required, or download jobs from the writer into a PC.