Access to a master: The value of having a mentor 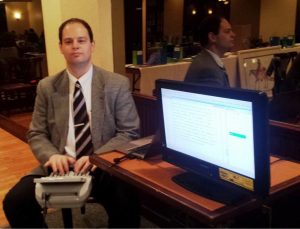 Back in 2016 before giving my first speech at my local Toastmasters club, I emailed a draft of my speech to my assigned mentor, Jason. Jason is a seasoned member of our club and has given dozens of speeches over the years. He had developed a keen eye for how to craft an effective speech. Jason redlined through several paragraphs of my speech and typed a note about getting right to the point. I accepted his input and rewrote the speech. Had I not worked with a mentor and had I done it on my own, I would probably have droned on and on about things that are interesting to just one person — me — and barreled through the four- to six-minute time limit.

In the field of court reporting, I am a mentor to several students through both NCRA and the New York State Court Reporters Association. I try to give them the same beneficial insight in reporting as Jason gave me in Toastmasters: to avoid pitfalls, discover best practice habits, and stay disciplined and focused. I’ve heard anecdotes of students spending precious time in useless practice habits like sitting in front of a television and writing the news while the writer is turned off. (How do you know what you are writing?) A student may think that is effective practicing, but without the feedback of either paper notes or a realtime display, it is just a vain exercise.

All of us know how hard court reporting is. In fact, speedbuilding can be just as nerve-racking as public speaking. We can all empathize with the student who has been stuck at a particular speed for what feels like eons, and the bitter disappointment of failing that speed test week after week. That student may be just one more failed test away from jumping ship and abandoning a significant investment of time and money. The difference between walking away in frustration and becoming a successful court reporter often hinges on wise input from a mentor.

Mentors guide students, and they offer encouragement and practical advice based on personal experience. When a student works with a mentor, that student has prime access to an individual who has mastered the craft of court reporting and worked in the field long enough to know a thing or two. A well-qualified mentor has operated in a wide variety of settings and has faced and survived both the tedious routine and the exciting challenges that can happen in the course of a court reporter’s day. Think of a young voice student who had the chance to work with the legendary opera singer Luciano Pavarotti. Pavarotti had a passion for singing and for encouraging young singers to refine their craft. He not only performed in major opera houses across the globe, but he coached many voice students as well.

Whether a reporting student needs help, an occasional pep talk, or a serious high-voltage motivational speech, the mentor is willing to commit the time and to be responsive to the student’s needs. It goes without saying that the student must be equally committed and willing to put in his or her due time and effort. Remember, this is a volunteer effort. Time is valuable to us all, and being a mentor means being willing to give some of that precious time for free. Likewise, the student needs to respect the time and energy given by the mentor for his or her benefit.

I have a mentee* who occasionally sends me her transcribed assignments to look at the punctuation. While reviewing a jury charge, she had put in so many underscores denoting drops that I had to stop marking the grammar. Instead, I wrote a note in red ink: “It is critically important that you practice at a speed you can actually get down.” Her practice habits were not going to yield much success if she continued practicing at too-high speeds, dropping too many words, and trying to learn punctuation from incomplete passages.

*(Yes, mentee is a real dictionary word. Be sure to define it so you don’t get minty, men tea, men tee, or heaven forbid, meanty.)

Communication is key for a mentoring relationship to be successful, whether it happens by email, phone, text, video conference, or in person, if possible. Each week I send an email to a list of more than 90 students and working reporters. The email may cover anything related to the field. After coming back from NCRA’s convention in Las Vegas, I wrote a lengthy piece summarizing my experiences there. Being a mentor means sharing your professional expertise to help a student reach his or her goals. Being a mentee means receiving valuable tutelage, for free, from a pro who has already been there. So go ahead and sign up. Your future may well depend on it!

Joshua Edwards, RDR, CRR, is a captioner in New York, N.Y. He can be reached at joshua@jbreporting.com.

Published in Career, Getting Through School and Up-to-Speed

After high school, Whitney Kumar’s mom cried when she told her that she wasn’t going the traditional route. “Mom, Dad,” Kumar recalled saying recently to her parents. “Could you imagine if I had just gone to college and gotten some boring job? Now I’m working with Judge Judy and winning Emmys!” Read more about Whitney's experience: bit.ly/3Qx2V0C ... See MoreSee Less