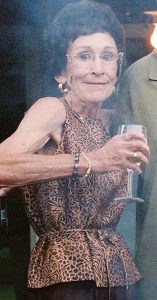 The court reporting community lost one of their own on Jan. 15, 2018. Bettye King Menck of Shelbyville, Tennessee, was one of the last pen writers in the state — perhaps the country! She began her court reporting career after completing her training through a civil service program and began working for the federal government at Eglin Air Force Base in Florida to pay for her training. In 1965, she moved to Shelbyville to become one of the seven charter members of the official criminal court reporters of Tennessee.

A letter she received in 1977 from the executive secretary of the state reads, in part: “In 1965 you accepted the challenge of this post as an adventurer in an endeavor with an uncertain future. It was a new idea in Tennessee, one that was created by the application of the concept of ‘equal protection under the law.’ The members of the Supreme Court join me in extending our personal gratitude to you for your efforts in a job well done. It is our hope that you will continue your efforts for many years to come.”

When her judge retired in 1990, Bettye continued on as a freelance reporter until 2004 — when, at the age of 71, she laid down her pen for good. Not only did she serve the legal community well, she was also a mentor to many new reporters through the years. I knew the family from a young age, and in my senior year of high school, I went with her on career day to sit in on hearings in the criminal court; and, ultimately, changed my course of study. It was that day I decided I was going to court reporting school. I know of at least two other current court reporters that learned of court reporting through Miss Bettye. Not only was Bettye Menck my mentor, she was my former mother-in-law and my friend. Her impact on the court reporting community will not be forgotten by those of us who knew her.

Published in In Memoriam, News and People