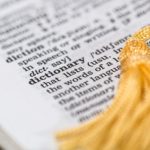 Current events seem to play a big role in this year’s decisions by dictionary makers for a word of the year.

Merriam-Webster chose justice as their word of the year.

The company cited a variety of reasons the word won the top spot. According to Merriam-Webster, “This year’s news had many stories involving the division within the executive branch of government responsible for the enforcement of laws: the Department of Justice, sometimes referred to simply as ‘Justice.’ Of course, the Mueller investigation itself is constantly in the news and is being carried out through the Justice Department. Another big news story included yet another meaning of the word justice, as a synonym or title for ‘judge,’ used frequently during the Kavanaugh confirmation hearings for the Supreme Court.”

Other words that brought traffic to the Merriam-Webster website were nationalism, pansexual, lodestar, epiphany, laurel (remember the laurel vs. yanny debate?), pissant, respect, maverick, and excelsior.

Dictionary.com’s 2018 word of the year is misinformation.  They define it as “false information that is spread, regardless of whether there is intent to mislead.”

They report that the meaning of misinformation is often confused with disinformation. However, disinfomation is defined as “deliberately misleading or biased information; manipulated narrative or facts; propaganda.” So the difference between the two involves intent.

Their runner-up choices for word of the year include representation, self-made, and backlash.

The Oxford Word of the Year 2018 is toxic. Oxford defines it as “poisonous.” The dictionary maker says it “first appeared in English in the mid-17th century from the medieval Latin toxicus, meaning ‘poisoned’ or ‘imbued with poison.’”

Published in Industry Update and News