I finally graduated from court reporting school: Here’s what my wife had to say 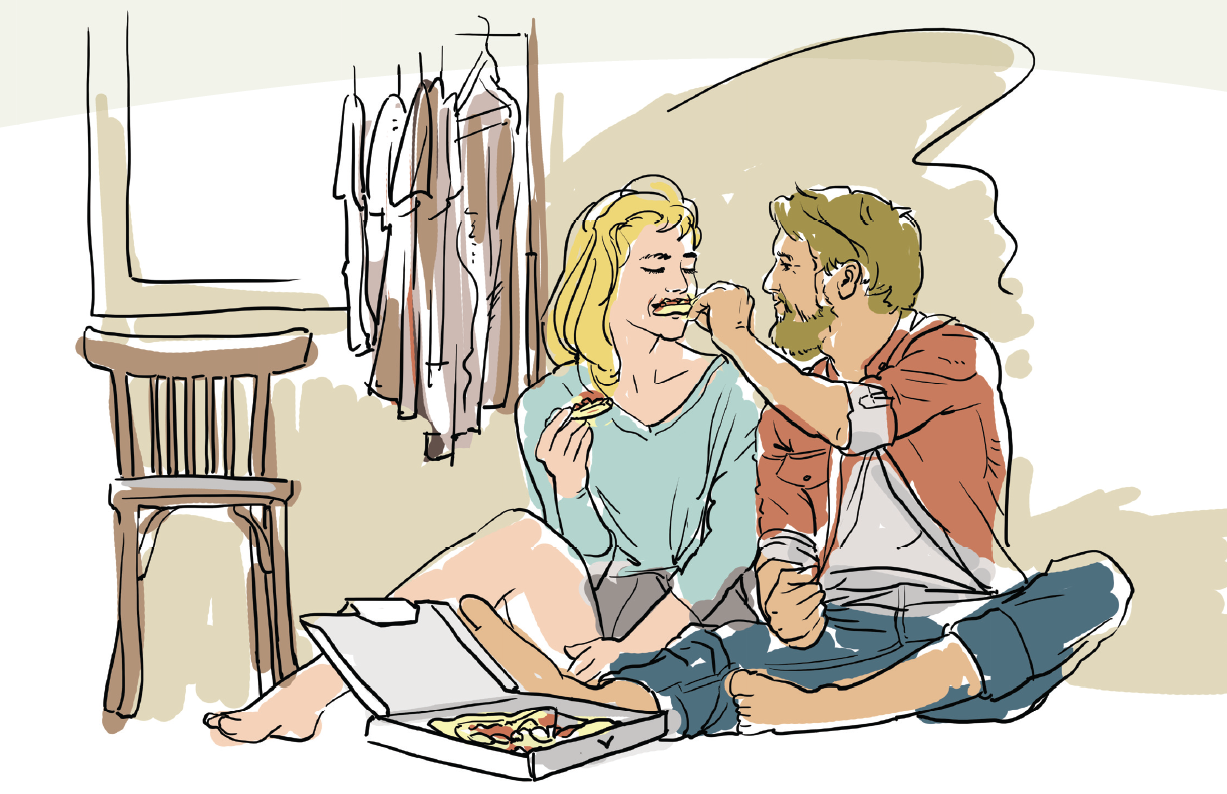 This story was published in the March JCR.

By Eric Voorhis and Brittany Carney

The conversation started in the cute and sunny one-bedroom apartment on the top floor of a house in Huntington, N.Y., after we had moved in most of our belongings and were beginning to set up our life. My girlfriend (now my wife) and I were desperate for WiFi and Netflix to go along with our $10 bottle of wine and box of pizza on the floor. We scheduled the cable guy to come the next day.

The cable guy was tall and slim, very much playing the part with an oversized work belt and a toolbox with wires sticking out of it. He noticed my steno machine immediately. It was hard to miss, a clunky, green paper writer that I rented from the Long Island Business Institute my first day. I had started court reporting school a month earlier and was developing a strong command of writing difficult phrases like, “The wet rag was red,” and “Don’t pet the mad cat.” I felt like a genius. Theory was a joy.

“Whose steno machine is that?” the cable guy asked, as he put down his things.

“Mine,” I said. “I actually started school a few weeks ago.”

“It’s tough,” he said, explaining that he had gone to court reporting school back in the 1980s. “I topped out around 180 words per minute and that was it. I had to quit eventually.”

I wasn’t sure what to say. He wasn’t the first person to warn me that it was hard, but he felt like the gatekeeper. I don’t think installing cable or Internet is a bad profession or anything. This man was incredibly nice, honest, and heartfelt. But it still felt like a warning. He left me with no reassurance. What I heard was: You probably won’t make it.

The cable guy stayed with me the entire time I was in school, just shy of four years.

During court reporting school, I did the following things: Got engaged; moved three times; had several different jobs, including one at Trader Joe’s, another slinging egg sandwiches at a deli, and one more doing busy work for a law firm; lost two grandparents and an incredible cat; got married; traveled to places like Croatia and Thailand; adopted a wonderful puppy; went through periods of depression; didn’t think I could do it; and practiced for thousands of hours (mostly while staring at Planet Earth on mute).

And then I finally made it out.

I’ve already said too much. Way too much. My wife took the brunt of it. She was my shoulder to cry on, my cheerleader, and the person who kept me going when I wanted to become a cable guy.

Here’s what she has to say about court reporting school and the profession in general:

EV | How did you feel when I finally passed my last test?

BC | Elated.  I couldn’t believe the day was finally here that you were done. Not to be cliché, but it felt like the first day of the rest of our lives. I felt proud, really proud, and a little overwhelmed. And relieved. Like, finally.

EV | About how many steno briefs do you think you know?

BC | Around 20 maybe? Not counting the ones that I guess correctly by chance when you throw me a pop quiz. Kind of a lot, though. You usually tell me them when we’re driving around so I know that a police officer is a PLIFER [PHREUFR], ambulance is a BLANS [PWHRAPBS]. Mostly stuff like that.

Oh, and PUFFERING [PUFRG] is pain and suffering. I know SMAFT [SPHAFT], as a matter of fact. TEESHT [TAO- ERBT] is T-shirt, but I think you said you made that one up.

EV | Come on, you know more than that.

BC |  I think that’s about it. Isn’t there another one that’s, like, sexual assault is SWAULT?

EV | How do you feel about my machine?

BC | Like it’s your mistress [laughing]. I’m jealous of her. You guys spend a lot of time together. No, I’m kidding. Kind of. You always described it as a word piano, so I guess that comes to mind. I think it’s super interesting. That’s it.

EV | Do you know how it works?

BC | I think so. I think you type the briefs or words on to the keys and then there’s software that’s connected to your computer that translates whatever you’re typing into real words. Is that right?

EV | Can you read steno?

BC | Absolutely  not. I don’t think I can read one word in steno. Which is weird because I know some of the briefs, but I would never recognize them in steno. I remember a couple of weeks ago you showed me a picture of a snarky little mug or something that read “Bitch Please” in steno, and I had no idea what it said. I couldn’t even guess.

EV | How many times have you seen me cry over court reporting school?

BC | Monthly, at least. Sometimes more depending if you were stuck at some speed or actually passing tests. I know there were some days where you just felt so hopeless or you thought you had passed a test, but it was a little bit over [finger-quotes]. How often do you think you saw me cry?

EV | What have you learned about the field of court reporting?

BC | That it’s absolutely necessary, and machines or voice-to-text aren’t reliable to do the job that you do. There’s work everywhere, and there have already been so many opportunities, even before you finished school. It seems like you’ll have great job security because there’s such high demand. I probably sound brainwashed.

Also, it’s an incredibly supportive community. Everyone you’ve reached out to or have been in contact with has been so helpful and encouraging, and I know it’s been important in your success.

EV | Do you wish I decided to do something different with my life?

BC | No, not really. I admire that you decided that this is what you wanted to do and went for it. I really admire it. I just wish it didn’t take quite so long to get there.

EV | How do you feel about one person doing two voices in a dictation?

BC | Silly. It sounds like you’re having a party when you’re listening to a recording from class. I think it encourages me to work on my own character voices.

EV | Have you ever considered being a court reporter?

BC | No. It does seem like such a great community, and I love that you get to be in the zone and do your own thing, which is great. I like the level of independence you have as a freelancer. I’m just more of a social person, and I think I need more social interaction in my career. Plus, someone has to provide us with health insurance.

Eric Voorhis is a freelance court reporter who spends a lot of time on Zoom. He can be reached at ecvoorhis@gmail.com. His wife, Brittany Carney, is a very patient flight attendant. They live in Providence,  R.I., with their dog Penelope.