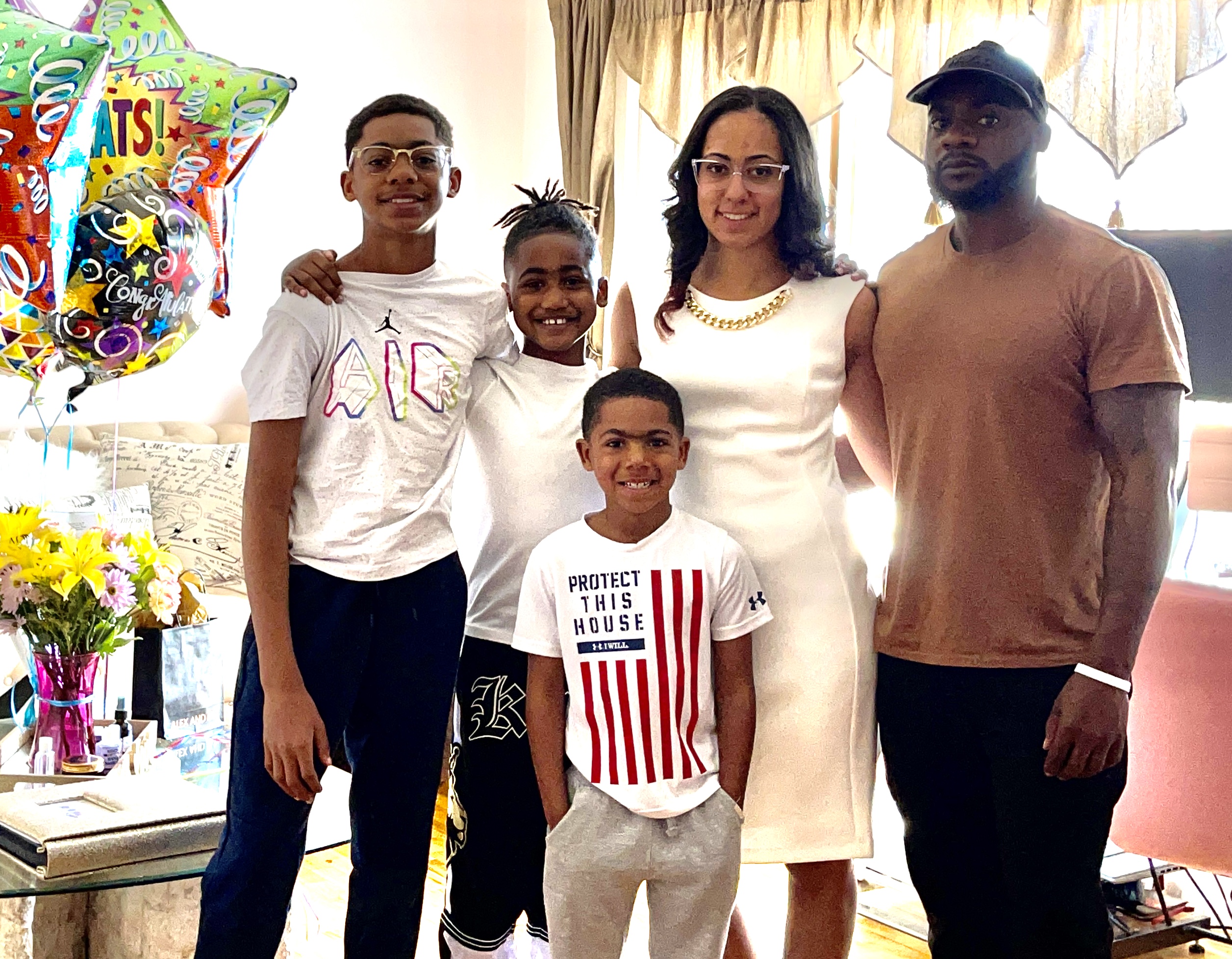 “My mama passed!” were the words that rang through the phone from 7-year-old Dominic Mapp as I called Shacara Mapp, RPR, CRR, fifteen minutes after her scheduled CRR Skills Test was finished. We made it a habit to call each other right after testing. After hearing the news from Dominic, the celebration continued with tears of joy. Not only had Mapp passed multiple tests (and completed two certifications) in one testing cycle, but she landed a federal position before even holding her Federal Certified Realtime Reporter (FCRR) certification. Mapp isn’t just a stenographer; she is also the wife to her outstanding husband, Deondrá Mapp; mother to three adorable sons, Deondrá Jr. (Duke), Dýlan, and Dominic; a court reporting instructor; a director on the board of the Michigan Association of Professional Court Reporters; and now a federal reporter for the United States Eastern District of Michigan. I told Mapp that she had to share with our industry what she had just accomplished. She agreed, and here are the details on being the unstoppable stenographer that she is.

SD | Are you ready to share with the profession what just took place? You may have just made steno history.

SM| I don’t think I’ve made history, because I’m sure others have done this before, but I am blessed to have accomplished so much in so little time and would love to share my journey!

SD | On January 23, 2021, you applied for a temporary official court reporter position for the Eastern District of Michigan. At that time, you currently held only your CSR. What motivated you to apply for that position on such a high level? Were you feeling a type of way because you didn’t hold your CRR or FCRR certification yet?

SM | So, Susan Watts, RPR, of Buffalo, N.Y., tagged me in a Facebook post the day before about an official position opening here in Michigan and told me I should go for it. I had every reason why I shouldn’t (no national certifications, not enough years in the legal realm of our profession, no court experience, my boys being too little). But she told me to go for it anyway because they want reporting experience and realtime, which I had ten years of since I started out doing CART and captioning in 2011. I did not feel like I would be chosen to fill the spot, but I knew I would feel worse if I had regrets for not applying. So I said to myself, “Hey, what’s the worst that can happen? I don’t get the job, and I’ll have to apply again in the future.” So, needless to say, the morning of the 23rd, I eagerly applied.

SD | You took the limits off! And although you didn’t meet all of the asking qualifications, you took that chance. In Episode 24 of the steno podcast, Confessions of a Stenographer, in which you interviewed Scott Wallace, RDR, CRR, a previous federal supervisor in the Washington, D.C. area, he gave tips and suggestions on the interviewing process for federal positions. He listed other qualifications that are needed outside of the certifications. Would you say he gave excellent advice?

SM | Excellent is an understatement. On March 10, I received an email with an invitation to interview. I instantly called Scott and referenced some of the points he made in his podcast. I asked him for advice because I did not think I was qualified enough to be blessed with such an awesome position. In that moment, Scott gave me words of encouragement and explained that, even without the certifications, I was qualified enough to at least be considered for the position. But [he said I] needed to make sure I obtained my certifications in the very near future so that my chances could be better for growth if I was chosen.

SD | On March 31, greatness took place. You were offered the federal position on your son’s 7th birthday. Looking back, you manifested this position before you had it and during the actual interview. Confidence is key. Can you share with our readers what took place on this day?

SM | As we were preparing to go to the movies to see King Kong for Dominic’s birthday, I received a call from an unfamiliar number, which I almost did not answer. Something told me to answer it, and when I did, everything changed.

SD | While you were waiting to start your new position as a federal official court reporter, you decided to go full speed with testing. The first step was renewing your membership with NCRA. Can you share why membership on a national level is important to you?

SM| Membership on a national level is extremely important in this field if you plan on evolving in your career and want to stand apart from other reporters by being able to obtain and keep your certifications and to be able to network with some of the most prestigious reporters.

SD | We started an intimate daily practice group. How has that group been working for you? Would you say that it has been beneficial to practice daily outside of work?

SM | The practice group has been amazing! I will say our group was an integral part of my success in my testing journey. Not only do we practice together, but we push each other to the max; we celebrate each other’s accomplishments no matter how big or small they are; we challenge each other to step outside of our comfort zones; and we motivate each other to reach beyond the sky.

SD | You previously passed all your Skills Test legs for the RPR and only had the Written Knowledge Test to complete. You studied and prepped for this test.

SM | On April 17, the first Saturday of many testing Saturdays to come, I took the RPR Written Knowledge Test. We were required to have a 70 to pass, and I actually scored an 83, which I would like to attribute once again to our study group.

SD | April 23rd was the big day for swearing in to your new job. Your family and friends were in attendance, and this was an amazing moment to witness. You stood there with your head held high, and we all would like you to know that we are extremely proud of you. How were you feeling?

SM | I was a ball of emotions. I was excited to be starting a new journey, sad to leave what I was used to, and nervous that I might be jumping into something I was not truly prepared for. But most importantly, I felt extremely blessed and honored to be getting sworn in for such a prominent position. I was the first reporter to be interviewed and sworn into the Eastern District remotely, so I was pretty excited about that.

SD | The swearing in was on Friday, April 23, and the FCRR test was on Saturday, April 24, in Pittsburgh, Pa. You and your husband decided to take a couple’s road trip to the test. For those that aren’t aware of the FCRR, give us the details about how the testing process is handled onsite.

SM | I definitely had a busy but successful weekend for sure! I signed up for two tests just in case one didn’t go so well. The first take was given, and immediately thereafter, we began the second take. We did not have time to start a new file or take a breather in between. From there, I checked my mailbox and email every day to see if my results would come early. On my brother’s birthday, May 20, I received an email stating that I passed both tests.

SD | Testing became a process where you have been testing every Saturday for a few weeks. Can you share what your support system was like in between testing? I can recall Duke studying with you in the early a.m. for a test. What did your middle son, Dýlan, tell you before and after your interview? How did you build such a strong support system?

SM | So testing became addictive after passing my RPR WKT in April, and I decided I would test every Saturday from then on. My support system was everything. My study group, which consisted of you, Avery Armstrong, Mekailah Lenora, Jeaninn Alexis, and Shernelle Griffith, was the biggest support, as they understood exactly where I was coming from and where I was going.

My family was my next big support system. My husband and boys had our practice schedule memorized, so much so that my youngest son, Dominic, would fuss at me if I was even three minutes late. He would get my old broken machine and sit right next to me and practice as well. My oldest son, Duke, would quiz me for my written test before school and sometimes before bed. My middle son, Dýlan, ensured me that even if I did not pass my tests or get the job, he was still so proud of me because I at least tried, and he would still throw me a party to celebrate — LOL!

SD | May 1st was the first day of Celebrate Certification Month, and you walked in with so much confidence and took that CRR. We all would like to say that you have been on fire. Talk about the CRR and what was your percentage?

SM | I decided to go ahead and take my CRR, since I was now an RPR and I scored a 98 percent.

SD | You go, girl! So you went out on a limb and then decided to register for the RMR Jury Charge and the RMR Literary. How did you do?

SD | Tests on every Saturday, all tests passed, you left one test off, which is the RMR Q&A. Why didn’t you register for that test, too?

SM | When I initially registered for the five tests, I did not know if I was adequately prepared to take the RMR Q&A, so I did not register for it. After weeks of practicing and testing, not registering became my biggest regret, and I was beating myself up about it. But I will certainly be registering for it in the next cycle.

SD | Can we say that since your passing streak has been on Saturdays, you will be taking that test on a Saturday in the next testing cycle as well?

SD | You just changed the game of steno and testing. I know you have encouraged others to aim high and go for it all. Can you share why certifications matter to you?

SM | Certifications matter to me because without them, many doors may not open for me. Having my certifications gives me a leg up on someone who may not have them but are going for the same job as myself and lets the receiver of my transcript know that I am qualified to adequately provide the services requested of me.

SD | In closing Celebrate Certification Month, what words of advice can you offer to the profession?

SD | Shacara Mapp, you passed your RPR, your CRR, your FCRR, and two legs of your RMR, all within a month. We are all so impressed and proud of you. You have set the bar high. Keep being the fabulous stenographer that you are. You are the change that is needed in our profession.

Shaunise Day is a student from Oakland, Calif.

Published in Career, Certification and News

👀Wow, they did it! #ncracertified ... See MoreSee Less