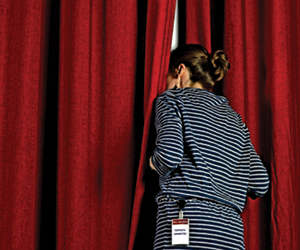 To give a better look inside what happens on the other side of the Contests, the following article is an abridged reprint from the June issue of the JCR print magazine.

What’s it like on the other side of the contests

The NCRA Speed and Realtime Contests that occur every year at the NCRA Conference & Expo give members a chance to show off their speed and accuracy. But behind the scenes are another group of members who are key to putting the Contests together. From finding and creating material and arranging for live speakers or, if necessary, recording materials, to hours and hours of grading before finally announcing the winners at the Awards Luncheon on Saturday, the members of the Contests Committee are one group of NCRA’s uncelebrated volunteer heroes.

Well, it’s time to change all that. In this article, meet just a few of the Committee members and learn more about what brought them to the Committee and what they find interesting about their volunteer work.

After almost 50 years in Silicon Valley, I relocated to Nevada City, Calif., three years ago. I am currently working part time as a remote CART captioner.

I have lived in Fishers, Ind., for 29 years. I have been a freelance reporter for 35 years (June 10 is the anniversary of my first deposition). I spent the first five years in the field working on Long Island and in New York City. Prior to being a reporter, I learned to read steno while in high school and typed transcripts for my court reporter father.

I live in Pickerington, Ohio, just east of Columbus. I graduated from the Stenotype Institute in 1989 and have worked as a freelance steno reporter ever since. On Jan. 1, 2001, I started my own business as a realtime stenographer and captioner; most of my work is in central and southeastern Ohio, West Virginia, and Pennsylvania.

I am a full-time instructor in the court reporting and captioning program at NAIT in Edmonton, Alberta, Canada, and a freelance court reporter and captioner. I have been reporting for 25 years and teaching for 15 years. It’s hard to believe that much time has gone by!

I have always been a teacher. When I graduated from Midstate College, I was asked to teach theory. I said I would try it, and 30 years later, I am still at it. It started out with “empty nest” syndrome. I took a test “What Do You Want to Be When You Grow Up?” The answer came back a lawyer (no way), an accountant (I hate numbers), or a court reporter. So here I am. I am still teaching online 14 hours a week for Hardeman School of Court Reporting and Captioning. Court reporting is my passion.

JCR | How did you get involved in the Contests Committee?

BREWER | After retiring from competition, I volunteered to join the Contests Committee. It was my way of saying thank you and paying forward the efforts of those who worked to put on the contests previously.

KAROSCIK | I showed up at an annual Conference and volunteered to help grade, and now they won’t let me leave. (I josh!)

MCKENZIE | I volunteered to join the Committee. I’ve been involved in creating tests for our provincial association speed contests for the past few years and wanted to expand on that experience.

SHUTTLEWORTH | I was chairman of the Illinois Contest Committee and thought it would be fun to be on the national committee. It was! I have been involved in the Contests Committee for many years off and on. Woody Waga was chairman when I first started. I just asked if I could be on the Committee, and it happened. I was chairman for a while. I instituted/conducted the first national Realtime Contest along with the Speed Contest. Even after I retired from the Committee, I continued to write the tests. As a side note, when you see an Illinois speedster, just say “Wimbledon.”

JCR | What surprised you about working with the Contests Committee?

FERREN | Whether or not the Committee members have competed in Contests, there is a genuine desire to create high-quality tests for the Contests and also to learn from the experiences of past Contests.

KAROSCIK | A massive amount of behind-the-scenes work has to happen to pull off a national contest. The level of competition is extremely high, so the work we do has to be extremely precise, accurate, and fast. What surprised me the most is the amount of time it takes to grade, especially for the Realtime Contests, since there is no editing before the file is submitted.

MCKENZIE | How much consideration is given to the quality of the tests and the organizational skills of the Committee members. It’s a lot of work!

SHUTTLEWORTH | How this Committee has always worked together finding material and then tweaking it to make it a good Contest. No one realizes what effort and preparation that goes into the creating of the Contests material. Also, the amount of time spent grading tests. Yes, there have been times when the grading isn’t over until 3 a.m. Saturday.

JCR | Do you have a favorite part about the Contests?

BREWER | I love grading good papers. It is particularly thrilling to see the skills of such good writers. We are all rooting for them, and we work hard to give them every benefit of a doubt in grading.

KAROSCIK | I love the tense but friendly atmosphere and camaraderie among contestants.

It has been a pleasure getting to know other Committee members, too. We are all drastically different but completely similar at the same time.

MCKENZIE | The Awards Luncheon is an amazing experience. The contestants are competitive but supportive of one another, and the excitement as we await the results is motivating. We are celebrating the best of the best!

JCR | Have you competed in a Speed or Realtime Contest?

BREWER | I have competed at many state, national, and international (Intersteno) competitions, both realtime and speed. Each venue has its own unique culture and idiosyncrasies, but there is always a wonderful rapport among the contestants that I love. We all have that same experience — months of practice, anticipation, nerves, girding ourselves for the competition, living through the humiliation or the exultation of the test, and sitting on pins and needles awaiting the results. I love the nervous expectation and hope, the feeling of being prepared and having given my all. Like being on the Committee, competing is a bonding experience.

KAROSCIK | I participated in contests for years at both state and national levels. I’ve been the chair of the Ohio Court Reporters Association (OCRA) Realtime Competition since I “retired” from competition in 2004 (I won three times), and I co- chaired the OCRA contests for six years. I placed in the OCRA Speed Contest several times, placed third overall in the NCRA Realtime Contest in 2010, and qualified in other state and national contests over the past two decades.

MCKENZIE | I have competed in and won our provincial association speed contest and competed in the NCRA Realtime Contest a few years ago. I like to challenge myself and work on improving my skills.

JCR | Do you have any advice for people who compete in either the Speed or Realtime Contests or who might want to compete?

BREWER | Dive in and start competing. You will become a better writer and learn from the experience. It is a growth experience. You don’t grow and experience new things unless you say yes. And, yes, practice!

FERREN | Even though I haven’t competed, my advice is the same as for any test: Practice!

KAROSCIK | If you’re on the fence, yes, absolutely you should try it! The close- knit gang of contest junkies is one of the most supportive collaborations of people you’ll find. You can join practice groups, get practice dictation, and give or offer encouragement any time.

MCKENZIE | Just do it! It’s so different from speed testing in school when you “need” to pass a test. In these Contests, you’re really competing against yourself. Practicing just a little bit every day will also make your job easier!