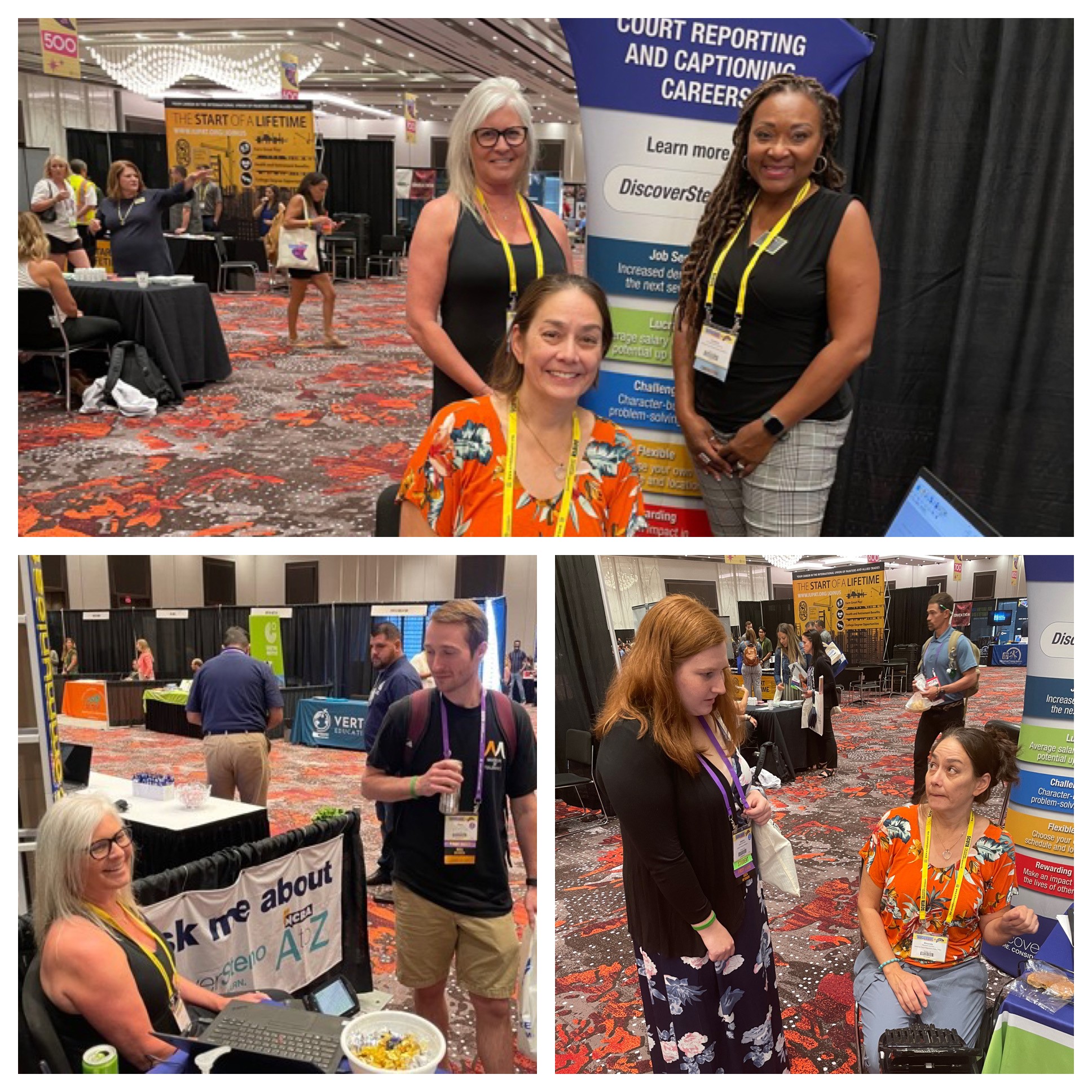 Cynthia R. Bruce, M.S., Ed., NCRA’s Senior Director of Education and Certification, was joined by a team of seven volunteers who demonstrated how a steno machine works, shared stories about their careers, and enlightened some of the approximately 3,600 ASCA members in attendance during the four-day event. They spoke about the abundance of opportunities in the court reporting and captioning fields, the flexibility the career choice offers, the earning potential, and more.

“The ASCA conference was well attended this year,” Bruce said. “We had a lot of people come by the NCRA exhibit booth. It is exciting to see the interest each year by attendees, and it is encouraging that so many counselors say they would be very interested in having court reporting and captioning showcased at their own school career days.”

“As always, visitors to the NCRA booth clearly recognized what hidden professional gems court reporting and captioning are,” she added.

Kimberly Farkas, RPR, CRR, a freelance and official court reporter from Henderson, Nev., was one of several who volunteered to show off her skills at the event. “It is always an honor and a privilege to be able to demonstrate realtime and speak with school counselors about the careers of court reporting and captioning. These dedicated professionals have a direct line to the students and next generations, the people we need to reach the most. Everyone is amazed by the technology and excited to take our message back to their students,” she said.

Michelle R. Ferreyra, a freelance court reporter and captioner from North Las Vegas who volunteered at the event, has been a court reporter for 13 years and is currently working toward her RPR. She said she volunteered at the ASCA conference because she is always interested in helping to spread the word about what a great career court reporting is. In addition to volunteering at career days for high schools throughout Las Vegas, she has also attended a Nevada state counselors conference.

“I would say we should all do our part to support our profession and keep us growing as the best profession. So many people don’t know we still exist, and we need to be out there trying to get more students, young and old, interested in court reporting as a career and all the wonderful opportunities it supplies us,” she said.

Ferreyra said she first heard about the profession in early 1990 when her ex-husband told her about a friend whose wife was going to court reporting school. She said one visit to the school and she was hooked.

“I enrolled right away. I got up to 200 wpm, then marriage, life, and kids happened, and I didn’t finish. I then decided at 38 I still wanted to be a court reporter when I grew up, and so I went back in 2003 and 2004 and I graduated and became certified in 2008. It was the best thing I ever did. I love telling people about the freedom I’m provided financially and with my schedule. I will always work with students and tell everyone I meet they should be a reporter,” she added.

Gina DiLuzio, RPR, a freelance court reporter from Las Vegas who also volunteered at the event, has been a court reporter and captioner for nearly 24 years and has worked for the same reporting firm for more than 16 years. She too said that getting the word out about the profession to students and counselors was also the motivating factor for her to volunteer.

“Court reporters are still around, and it is a very lucrative career, and a court reporter is the only method that can catch every word, verbatim, to make an accurate record,” she said. “There are numerous fields you can work in knowing machine shorthand and realtime. And you’re also making history,” she added.

DiLuzio said volunteering gives her insight into how many people don’t know what court reporting is, and she is glad she is able to educate them on this unique career. Volunteering for events like ASCA and career days is fulfilling, she said. “It is exciting to talk to people about court reporting who don’t know anything about what we do and actually show them what we can do on our writers with realtime, which most people are in awe of when they see it,” she added.

DiLuzio said she was a senior in high school in a business class when a 19-year-old court reporter came to talk to the class about her career. “She only had to do a year of schooling and she was making $30,000 a year in 1982 and ’83, which was a lot of money back then for someone being so young. I didn’t go to school until eight years after graduating when I found myself unemployed in 1992 and looking for a job in the Sunday want ads. And there it was in bold, a big article in the Denver, Colo., newspaper about the Denver Academy of Court Reporting. It was a sign,” she added.

ASCA supports school counselors’ efforts to help students focus on academic, career, and social/emotional development so they can achieve success in school and are prepared to lead fulfilling lives as responsible members of society. The organization provides professional development, publications, and other resources, as well as advocacy to professional school counselors around the globe.