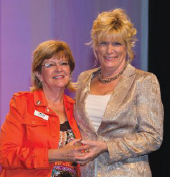 Sharon Kandt, CRI, (right) was named Educator of the Year during the 2013 Convention & Expo in Nashville, Tenn. Kandt, who teaches at Macomb Community College, began her career in court reporting in 1975 as a freelance reporter and is currently working as an official reporter, a position she has held for the past 36 years. She accepted a teaching position at Macomb Community College in 1976 and is currently the program coordinator of their NCRAaccredited court reporting program. Kandt is also a director on the board of the Michigan Association of Professional Court Reporters. As committee chairperson of the Students, Testing, and Education Committee, she administers and oversees the NCRA examinations as the Chief Examiner for the state. Kandt was named the recipient of the 2013 National Institute for Staff and Organizational Development Award through Macomb Community College.