Last week, a representative from Good Karma Brands, a sports marketing firm based in Milwaukee, Wis., contacted the National Court Reporters Foundation with a last-minute request for a stenographer to attend the Wisconsin Sports Awards the company was hosting. With confirmation that University of Wisconsin basketball player Nigel Hayes would be attending, the marketing firm thought having a stenographer on hand would let the presenters have a little fun with the junior who brought the court reporting and captioning profession to the forefront of this year’s March Madness playoffs.

“It was amazing. It was a huge event with more than 600 in attendance,” says NCRA member Chris Willette, RDR, CRR, CCP, a court reporter from Wausau, Wis., who volunteered to attend the event. “We met so many amazing people and were able to hang out backstage and chat with folks with whom I would never have imagined getting within 10 feet of.”

Willette, who was joined by NCRA member Karla Sommer, RMR, CRR, CBC, an official court reporter also from Wausau, said the two were asked to keep their presence a secret until after the awards ceremony but were able to mingle with attendees during the pre-awards reception. They also were able to strategize how they would be introduced on stage during Hayes’ post-awards interview with former Green Bay Packer and the evening’s master of ceremonies Mark Tauscher.

“Once they were settled on the couch, Mark started ribbing Nigel about the stenographer and then presented him with our prepared poster that was written in steno. Tauscher asked him to read it and then said something like ‘Oh, wait, we have your own personal stenographers here to help,’ at which time we entered the stage with our machines and sat down and started writing,” says Willette.

Willette said they were joined on stage by four additional Wisconsin basketball players as well as coach, Bo Ryan. After some light-hearted conversation, Willette relates that she took hold of the microphone and congratulated the team on behalf of all stenographers, court reporters, and CART captioners across the United States on a great season.

“I then turned to Nigel and said something like, ‘Nigel, earlier you wondered what you had done for our profession. Let me just tell you that we are in the process of a nationwide campaign to recruit more students into our profession. After your words, schools right here in the state of Wisconsin — Lakeshore Technical College and Madison — have seen increased enrollment. Your timing was impeccable and we thank you for that. We would like to thank you by making you an honorary court reporter for the next few minutes.” 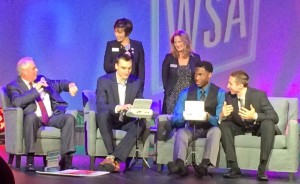 Willette said that Sommer then put her machine in front of Hayes and that he started writing. A second player then began writing on Willette’s machine.

“They sat and wrote and had a conversation about the words that were coming up. I interjected and told them they should perhaps consider a career in court reporting, give up on the whole basketball thing and join our ranks,” says Willette.

Hayes autographed both Willette’s and Sommer’s machines. The women in return presented the poster they had prepared to the team for its locker room. They also presented Hayes with one of the T-shirts the Wisconsin Court Reporters Association had made that featured in steno some of the words Hayes said during a post-game press conference when he drew attention to the captioner who was covering the event. Hayes also signed one that Willette said the association plans to raffle at its convention to raise money for the state’s Literacy Foundation, the same organization that sales of the T-shirts have benefited to date.

During an after-party, Willette said both she and Sommer had numerous opportunities to talk with attendees about the court reporting profession including describing what they do and the many opportunities the career offers, as well as the expected shortage in the next few years.

“We were recognized by a ton of people as ‘Oh, you’re the stenographers! How does that machine work?’ Random people would walk by and give a shout-out, ‘awesome job, stenographers,’” says Willette.