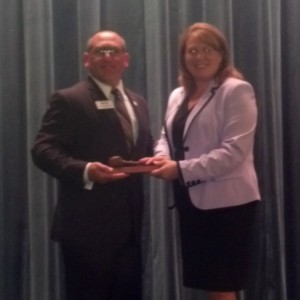 In her farewell speech, 2014-2015 President Sarah E. Nageotte, RDR, CRR, CBC, an official court reporter from Jefferson, Ohio, urged the organization’s membership to continue to work to engage more individuals to become part of the court reporting and captioning professions. Nageotte gave the speech during the NCRA Annual Business Meeting today at the Association’s 2015 Convention & Expo, being held in New York City, July 30-Aug. 2. She also acknowledged the hard work of her fellow board members, NCRA staff, and thanked the general membership for its support during her successful term before handing the official gavel over to 2015-2016 President Steve Zinone, RPR, an official court reporter from Pittsford, N.Y.

Published in From NCRA's President, NCRA & You and News