NCRA members representing 26 state court reporting associations met with their respective representatives on Capitol Hill in Washington, D.C., March 22, the final day of the Association’s Legislative Boot Camp, and urged them to support the reauthorization of the Training for Realtime Writers grants. The grants are part of the Higher Education Act passed by Congress in 2009.

NCRA’s Legislative Boot Camp is sponsored by NCRA’s Government Relations Department. It offers a two-day program with sessions that include an introduction to politics, grassroots lobbying techniques, effectively communicating with the press, understanding federal initiatives, building lasting relationships, and what to expect when visiting lawmakers on Capitol Hill. The attendees also participated in mock hearings and role-playing exercises that taught them tips about promoting the profession to external audiences and consumer groups and how to successfully testify before legislators. 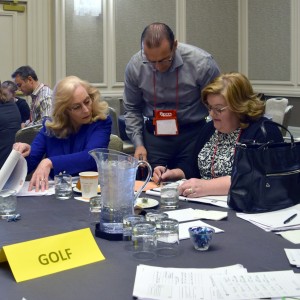 For Danielle Murray, RPR, an official court reporter from Olathe, Kans., this year’s event marked her first trip to NCRA’s Legislative Boot Camp, and the experience left her more confident in being prepared to testify before committees, build relationships with like-minded groups, and use an array of new tools to successfully promote the profession at the grassroots level.

“It was a great privilege to work with leaders from all around the country and to come together to grow as a profession. It’s crucial to get out there at the grassroots level and advocate for our profession. Court reporters and captioners are important. It’s a growing profession, and we’re not going anywhere,” said Murray, who serves on the board of directors for the Kansas Court Reporters Association.

For LuAnn M. Gill, RPR, vice president of finance for the Texas Court Reporters Association, and an official court reporter from Cleburne, Texas, not only did she learn how to speak to legislators and advocate for the profession during Boot Camp, but the experience also allowed her to connect with other court reporters from across the country.

“I met lots of reporters who I now count as friends. I had so much fun during the entire process, the type of fun that makes you exhausted both mentally and physically,” she said. 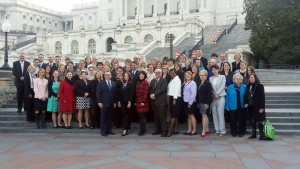 “I strongly encourage everyone to take advantage of your next opportunity to attend a legislative boot camp, whether it’s NCRA’s or TCRA’s, and get trained on how to advocate for our profession. We are the experts, and so we know the benefits of a live court reporter in all settings,” Gill added.

During Hill Day when attendees met with their state representatives or legislative staff, NCRA members emphasized the importance of accessibility and how captioning fulfills requirements for the Americans with Disabilities Act among other legislation, as well as the growing job opportunities in the court reporting and captioning field. Several explained the technological process behind realtime and CART, explaining how court reporters and captioners are related and how CART, captioning, and realtime are being used in increasingly new markets.

Rachel Waterhouse-Schwalm, RPR, a freelancer and firm owner in Dubuque, Iowa, and Kara Holland, RPR, an official in Sioux City, Iowa, commented that they felt prepared for their meetings on the Hill after the previous two days of training, a sentiment that was echoed by many other members.

In addition to having the opportunity to visit with lawmakers, the participants also had the chance to put their newly learned skills to work when they attended a reception with Rep. Rodney Davis, one of NCRA’s legislative supporters, as well as a second congressman who paid a surprise visit to the event.

“We had the honor of having an unscheduled visit with Rep. Kevin Yoder, and he was gracious enough to make an appearance at our closing reception, but it was because of all of the skills we had learned during our session at Boot Camp that made that happen,” said Murray.

“As it turns out, he was very supportive of the reauthorization for the funding of the Training for Realtime Writers Grant as part of the Higher Education Act. It wouldn’t have been on his radar had we not pointed it out to him,” she noted.

When attendees shared stories from their day on the Hill during the reception, many commented on how receptive their representatives and staff were about the Training for Realtime Writers grants. While several representatives cautioned that Higher Education Act is not likely to come up in Congress this election year, the day showcased how important it is to make sure legislation that affects court reporting and captioning remains in the conversation. The attendees from Alabama, for example, made a point to visit every representative’s office for their state in both the House and Senate, even though they only had scheduled appointments for those representing their individual districts. Linda McSwain, RPR, a freelancer and NCRA board member from Mobile; Wendy Myhan, a freelancer from Muscle Shoals; and Ashley Davis Dickey, RPR, an official from Birmingham, all represented Alabama.

“Go to Boot Camp. It’s a lot of work but completely worth it. I feel prepared to testify in front of committees, and now I know what to expect,” Murray added.

“It was stressful, no doubt,” agrees Gill. “But we all survived, not one drop of blood, and it was so worth it.”

About the Training for Realtime Writers grants program: The program was created with funds earmarked by Congress to help train more captioners to meet the need of the estimated 48 million Americans who are deaf or hard of hearing. Under the program, court reporting programs were able to apply to the U.S. Department of Education for the grants to support recruiting more students and improving teaching technique. The grant program was rolled into the Higher Education Act in 2009, which was authorized for five years, after Congress stopped providing earmarked funds. From 2001 to 2009, more than $15 million in Congressional earmarks were awarded to court reporting programs. Court reporting programs were awarded between $900,000 and $1.2 million a year from 2010 to 2014.