Steno on the go!

What’s the strangest place you’ve had to tap-tap-tap away on your little machine, knowing that people are relying on your speech-to-text output? A bus perhaps? No? Well, Michelle Coffey, RPR, CRI, CPE, has done just that, and she shared her story with the British Institute of Verbatim Reporters. Coffey owns Premier Captioning & Realtime Ltd in Wicklow, Ireland, and is a seasoned reporter. To know what it was like to caption on a moving bus, read her story below. Sounds like a whole heap of fun! 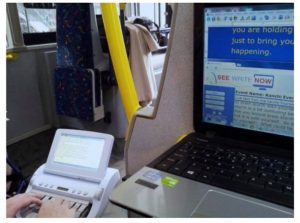 We all know that every day in the working life of a captioner is different and can be a challenge, and then there are days like Tuesday, November 26! It began like any other day, with a booking for a regular client at a conference they were holding to discuss accessible tourism in Ireland.

But then I was told we wouldn’t be needed till after lunch as the morning was being spent on an ‘accessible bus tour’ to some of the accessible sights of Dublin. Hold on a minute, though. If I’m there for access for the deaf/hoh tourists and I’m not needed, then how accessible is this tour going to be for them? So I asked how they’d feel if we tried to make the tour bus accessible. Without hesitation, we got a resounding yes! If you can do it, the organizers said, let’s go!

On the morning of the job, I arrived at their office with laptops, screens, projectors, extension cables, etc. I could see the perplexed expressions as they tried to work out how best to break it to me that I wouldn’t be able to plug in my extension lead on the bus or indeed my projector! But once I reassured them that I did really have some clue about what we were about to embark on and that the screens were for our final destination, everyone relaxed.

And I have to say, it was by far the most fun job I’ve done.

Three double-decker Dublin Buses pulled up outside the office, where everyone was given a name tag and allocated a bus. The idea was that as the buses traveled between destinations, the facilitator would lead discussion and debate onboard; and then in the afternoon all three busloads would feed back their information to the group at large. As our bus was now equipped with live speech to text, the occupants of the other buses could see what we were discussing or joking about! The tour very quickly descended into a school tour mentality (we were even given some snacks) with lots of good-natured joking, and one of our blind facilitators even scolded me for shielding my screen from him which meant neither he (nor Cookie his guide dog) could copy my answers to the quiz.

It soon became apparent that our driver was quite new to the concept of braking in a timely fashion and had probably never passed a pothole he didn’t enter! This being the case, I was finding it increasingly difficult to stay upright myself, much less my machine; with that in mind, the guys and gals on our bus decided to take bets on when the next bump in the road, traffic light, or such thing would cause me and/or my machine to slip! It really lightened the mood, everyone had a laugh, and it brought home to people in a very real and tangible way that accessibility for everyone is not just a soapbox topic. In fact, it became something that everyone on our bus played an active part in (even if some of them were “accidentally” bumping into me to get an untranslated word — and a laugh).

But it showed that access matters, and that it should matter to us all!

What I didn’t know before that morning was that not only were we doing a tour on the bus, but we also had two stops; one at a brand-new and very accessible hotel and one at a greyhound race track. Initially, it was suggested that I would stay on the bus and not transcribe the tours, but where’s the fun in that? And more importantly, where’s the accessibility in that? So, I picked up my steno machine, laid it against my shoulder like a carrying hod, and off I trooped to join the fun once more.

Once we got off the bus, the bets turned to how many different positions they could get me to write in; standing (we weren’t in the lobby of the hotel long enough to procure a chair); sitting (in the bar I managed to find a stool); balancing on a bed (with a busload of people crammed into even the most luxurious of hotel rooms, it tends to get a little cramped; never before had I cause to utter the sentence “Any chance a few of you guys could move over a little, I’m nearly falling off the bed!”); squatting (trackside at a greyhound racing park); machine stand on a bar table (at the betting counters in the racing park), and finally, my machine held by another tour member in the lift — it was a truly interactive tour.

And to finish the day off, we went back to the Guinness Storehouse for our panel discussion and debate about accessible tourism in Ireland (and free pints of Guinness, of course). All in all, a brilliant day. An important topic discussed, debated, delivered, and demonstrated in our different locations — the best job ever.

Published in Captioning, CART-Wise, Members in Action, News and People in the News