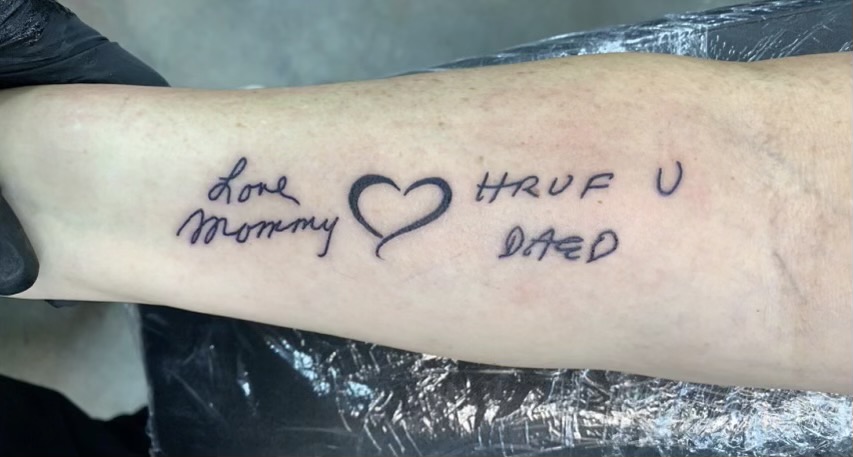 Janine Ferren, RPR, CRR, a freelance reporter in Fishers, Ind., posted recently on social media about her new tattoo. She told the JCR Weekly more about the decision to get it and what it means.

JF | The tattoo has my late parents’ signatures with a heart in the middle. On the left side of the heart it says, “Love, Mommy” in my mom’s handwriting. On the right side of the heart it says, “Love you, Daddy” in his handwriting, but this one has an added twist. Dad was a court reporter and would actually handwrite me letters in steno. I recently found one of those letters and it was signed “HRUF U DAED” (love you, Daddy). Stenographers will realize that the first D in daddy should be TK (TKAED), but he wrote it as a D and so I left it that way. The tattoo is on the inside of my right forearm. I’m still amazed that I have my parents’ actual signatures on my arm!

JCR | What gave you the idea?

JF | Shortly after my parents died, my sister (also a court reporter) gave me a keychain with both my parents’ signatures on it. Additionally, an attorney friend has “Love, Dad” tattooed on her arm, and I’ve always liked it. Those two things combined in my mind and the dream was born. Once my son was nearing the end of his training to be a tattoo artist, I told him that I wanted him to do this tattoo for me, which makes it even more special. I got teary-eyed when he finished, not from the pain, but from the realization that my son tattooed his grandparents’ signatures on me.

JCR | Where did you father work as a court reporter?

JF | My dad began his court reporting career in the 1950s working for the district attorney’s homicide division in New York City. He would go to murder scenes and report the statements. After that, he became a freelancer and remained in that position until he retired after age 75. He absolutely loved being a court reporter.

JCR | Is that what gave you the idea to also be a court reporter? How old were you when you decided?

JF | Yes, I definitely became a court reporter because of my father! I typed transcripts for him starting at the age of 15. At first, he would dictate his steno notes for me, and I’d type the transcripts from the recordings he made on the Stenorette reels. As a high school senior, I was taught to read steno by one of his typists and continued typing his transcripts until I became a reporter. Although I attended college for music (classical piano) and earned a bachelor’s degree in it, it was during the summer before junior year of college that I decided I didn’t want to be a musician but instead wanted to be a court reporter. I was 19 at the time. I’ll never forget the look of pride on my dad’s face when I made this announcement. For the next two years I attended full-time college five days a week and part-time court reporting school two nights a week. I graduated college and reported my first deposition just two weeks later!

JCR | You said you are planning another steno tattoo?

JF | Yes! A couple of reporters actually have a similar tattoo to this. It will incorporate a heart, a peace sign, and the steno keyboard: Peace Love Steno. Of course, I will have my son do the design and tattoo work!

JCR | In honor of Celebrate Certification Month, would you like to add something about how you feel about your certification?

JF | I’ve held my RPR for more than 30 years and my CRR for 25 years. Since the late ‘90s, I’ve only had one leg left to pass on the RMR (the testimony leg) and didn’t do anything about it. Knowing that I will lose the existing legs under the new Exam Retention Policy if I don’t pass the final leg by Oct. 1, I am determined to earn my RMR before that time. I joined an online practice group earlier this year to help me pass the test. I am very proud of the certifications that I have. While they’re not required to perform my job in my state, they show that I took the time to practice for, take, and pass these exams, and that I’ve earned my continuing education credits to maintain these certifications. Earning my RPR as a young reporter gave me confidence that has stayed with me ever since. I’m looking forward to increasing that confidence with my next certification!