My summer adventure with NCRA A to Z® 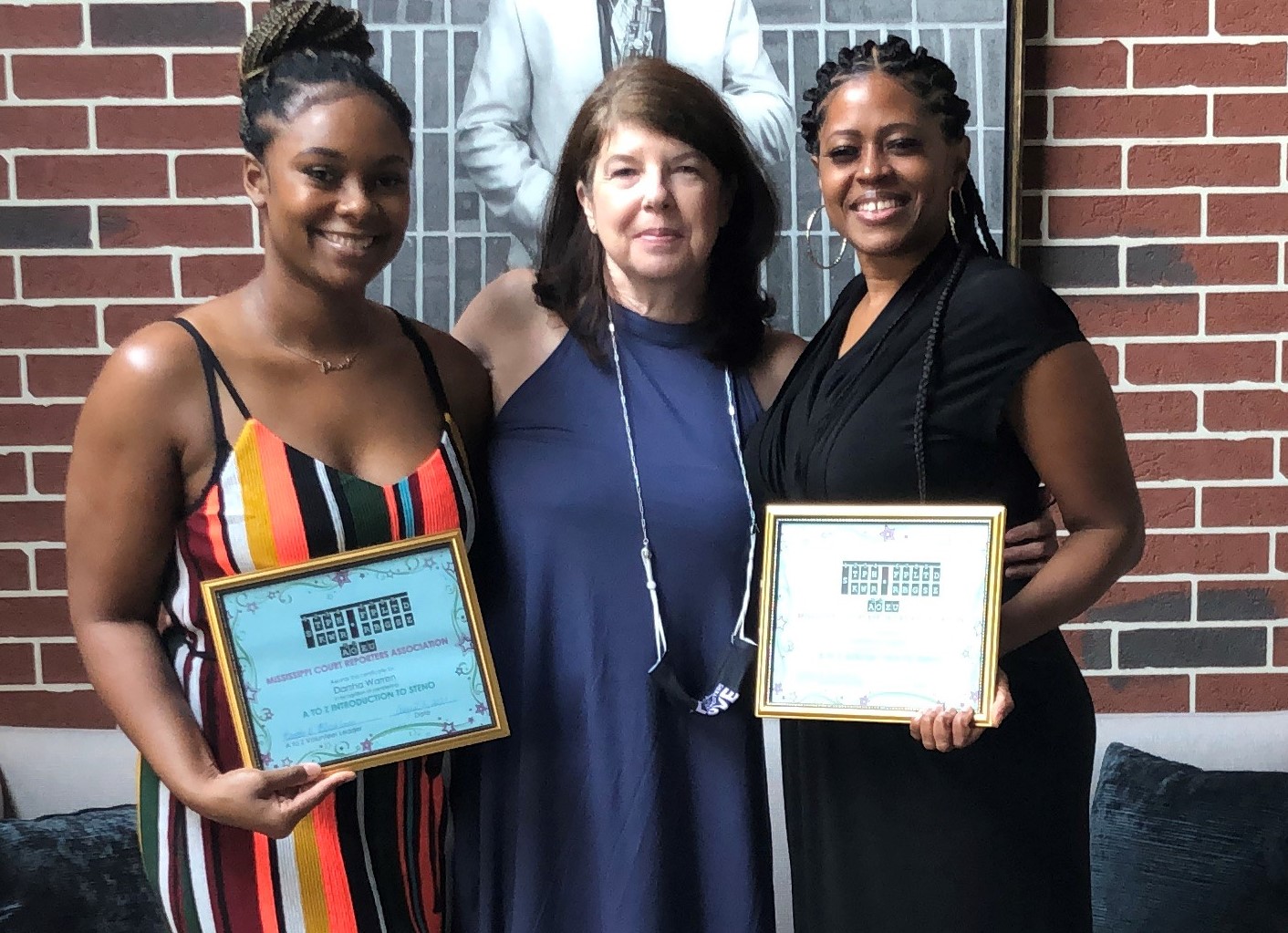 I was contacted in the early part of June about leading an NCRA A to Z® Intro to Steno Machine Shorthand program for a small group urgently wanting to begin. I had worked with one of the participants as an official in state court, and her friend had come to work in the same office later. Darsha Warren and Marsha Cherry are my NCRA A to Z stars who persevered through this adventure.

June 24th was our first meeting. I wasn’t sure I could survive the six weeks, as I was already exhausted and not feeling my best. We had our first in-person trial in my federal district the first part of June. This summer, the Mississippi Delta heat was excruciatingly hot, and I thought it might kill us all. Although I was overwhelmed and exhausted, I was excited to finally have prospects interested in court reporting.

After our first in-person meeting held in Cleveland, Miss., I was encouraged by their enthusiasm. Both seemed very adept at writing on the machine almost immediately. By our July 1st meeting, both were seriously interested in court reporting. I felt nervous for them and thought about their options on the way home, wondering if other NCRA A to Z leaders become like mothers worrying over their children. I wanted them to be practical, but I also wanted to scream, “Just do it! Go for it!”

I had an awesome Fourth of July, and our next NCRA A to Z lesson was scheduled for the 8th. What I really meant was I worked to complete an expedited three-day trial most of that weekend. After sending out the transcript, I began preparing for our third meeting. The girls’ enthusiasm was contagious.

However, Tuesday morning I received a text from Darsha indicating that she wasn’t feeling well and would have to skip this meeting, and later I received a similar text from Marsha. I was deflated. As it turned out, they were both quarantined. They work in the same office, and over the Fourth, COVID-19 had struck my group. I told them to keep me posted on how they were, and we would start up when they were able.

Feeling devastated and concerned we would lose momentum, I contacted my Mississippi group. Of course, I received support and assurances from Twila Hoover, RPR, and Rosie Sanchez, seasoned leaders who have been instrumental in starting a court reporting program at Pearl River Community College in Hattiesburg, Miss. They assured me it was their experience with participants that they would just pick right back up and continue on. It’s great to have a support system, whether you’re a student, an NCRA A to Z participant, or a leader, because, as we all know, stuff happens.

The next week Marsha contacted me, and although they could not return to work yet, they eagerly wanted to meet via Zoom. I was walking on air. Since I had a wellness checkup scheduled for that Thursday in Jackson, I set up for the Zoom meeting before I left for my appointment.

On my drive down to Jackson, I did not feel too well, but it is a bit of a drive early in the morning, and early is not my favorite time of the day. My exam began, and the doctor seemed panicked as she checked my heart with the stethoscope, saying, “Something’s not right.” My brain was in a fog, and I felt frozen. The next thing she said was: “I am getting you in to see a cardiologist.”

She walked out in the hall, and I could hear her panicked voice talking on the phone. I have never completed a wellness checkup so fast. I felt like a torpedo being shot through that office as the doctor completed her exam, then on to have my bloodwork, mammogram, etc., and I was done.

I was to see the cardiologist at 9 a.m. the next day. I decided to get a room and stay in Jackson, because, quite frankly, I wasn’t up to making the drive back. I wasn’t even sure if I should be driving.

I updated my husband as to what was happening; assured him I would be fine. I just wanted to lie down. My immediate concern was I only had my laptop and phone with me: No external camera, no power cord, no shorthand machine, nothing. How would I have my class that evening, if I felt well enough to lead it? After getting a hotel room, I napped all afternoon. When I woke, I realized I had my WiFi device and enough battery power on the laptop that I might make it through our meeting. Everything went off as scheduled, using my laptop only with no external camera. There were glitches, but we got through it, and all of us were excited to be moving forward.

I got a good night’s rest and made the cardiologist appointment the next day. After an echocardiogram and EKG, the doctor sent me home with a heart monitor that I would wear for three days. A stress test was scheduled for later. The monitor showed the same thing the doctor saw on EKG: a heart arrhythmia. The doctor said these PVCs, or premature ventricular contractions, are quite common and can be very minor, causing no serious problems. The problem that day was bad and I felt it. Not sure what changed, but the next week I was feeling better than I had in a while.

Our meetings continued each week, whether any of us felt in perfect health or not, and my girls completed their last lessons via Zoom. Their quarantine is over, and we celebrated their accomplishment this weekend, as you can see in their photo.

This NCRA A to Z class was one that taught both the participants and the leader something. Life is short. If you want to accomplish something, go for it. Don’t waste any time. I feel they did go for it. They both have the kind of attitude that I wish I could bottle and utilize not just for court reporters, but anyone who works in customer service. They could have easily given up from the start. COVID is a serious obstacle. We all know it is hard to work while pursuing another career, and then you throw in the obstacles that arise; it is easy to give up. But nothing worthwhile is ever easy. Many reporters have held down a job while completing this program. One of the things that I reminded these girls of when they were quarantined is that this was just the first of many obstacles put in their way. I am proud to say that these ladies not only finished what they started but have prayed about and are exercising good judgment as to their plans for school. If they succeed at this, it will require a lot of work on their part. I know it will be well worth it.

As for me, I have overcome so many obstacles through the years, and some I thought were going to take me out, but I have persevered. While there are some reporters out there who breeze through court reporting school, that is not the majority. If you finish this program, you have much to be proud of, not only because you have become a court reporter, but because of that list of obstacles you have overcome along the way. Remember those things, not to dwell on and feel sorry for yourself, but to celebrate the victory of overcoming/surviving them and moving ahead. Life is many times three steps forward and two steps back. We must keep going, moving ahead, and progressing toward the goal. Sadly, the average court reporter may not feel like a success. Realize that, as a court reporter, even the seemingly insignificant jobs you take each day affect someone’s life in some small or big way. You do make a difference in this world.

Thankfully, I received the last test results from the PET scan indicating no severe blockages. I am very thankful I will be able to still work in this profession that I love and continue teaching NCRA A to Z!

Brenda Blackburn, RPR, is a freelancer and agency owner based in Hollandale, Miss. She can be reached at LakesideReporting@outlook.com.

To learn about a careers in court reporting and captioning, visit NCRA DiscoverSteno. Find out more about the NCRA A to Z Intro to Shorthand Machine program here.