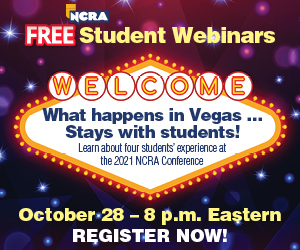 NCRA’s Student/Teacher Committee is launching a quarterly series of free live webinars targeted toward court reporting and captioning students. The first hour-long webinar, “What happens in Vegas … Stays with students,” will take place Thurs., Oct. 28, at 8 p.m. Eastern. Registration and more information can be found on the NCRA Learning Center.

The live event will feature new reporter Anna Mar, mother and daughter students Marian and Jacklyn Koi, and student Dana Spear. All the participants attended the 2021 NCRA Conference & Expo held in Las Vegas, Nev., which drew a record high attendance of more than 180 students. The panel will discuss why it is important for students to attend the NCRA Conference & Expo, what knowledge they can gain, the networking opportunities they will have, and more about the sessions that are offered.

The webinar series is a direct result of the popularity of three webinars held by the Student/Teacher Committee during 2021 Court Reporting & Captioning Week, which also attracted more students than anticipated, said Amie R. First, RDR, CRR, CRC, CPE, from Orlando, Fla., and a member of the Committee.

“We wanted to build on that success and present quarterly webinars. We want students to know what NCRA has to offer them,” said First, who has worked as a freelance court reporter, a broadcast captioner, a CART provider, and for the past 10 years as a federal official court reporter.

She hopes the biggest benefit of the webinars for students will simply be connections: “Connecting to NCRA, to other students, to working reporters, and to all the different avenues of the profession, as well as connecting for motivation,” First said.

Dana Spear, from San Antonio, Texas, is an online student at Tulsa Community College in Tulsa, Okla., who attended the 2021 NCRA Conference & Expo, and is one of the panelists on the upcoming webinar. She is currently writing between 160 and 180 wpm and anticipates graduating and preparing for her state exam next year. She would like to pursue a career as a CART provider. She said she hopes the webinars will bring students (including herself) a way to come together, encourage each other, and learn from other students as well as from the court reporting community.

“I hope to be able to share some of the things that I learned and implemented from being a student attendee at the NCRA Conference. This was my third time attending a national Conference, and I have learned from each one of them,” Spear said. “I decided that I wanted to get more involved, so I reached out to see if I could be a part of the NCRA Student/Teacher Committee. I hope that I can help answer any questions about the Conference and encourage other students to attend, if it’s possible,” she added.

Also on the panel for the first webinar is new reporter Anna Mar, a freelance court reporter from San Antonio, Texas, and chair of NCRA’s newly formed Creative Content Task Force. She is a 2019 graduate of the Arlington Career Institute in Arlington, Texas.

“The biggest benefit I hope students get out of these free webinars is information – information that they will need to become amazing reporters very soon. I also hope that they use this as a networking opportunity because networking is crucial in this profession,” Mar said. She added that she plans to share the experience she had at the 2021 Conference & Expo, which was her very first in-person NCRA event, and about just how important it is for students as well as new professionals to attend.

“I am always looking for ways to help and encourage students. When approached by Dana Spear to participate, I could not say yes any faster,” said Mar, who shared that she learned about the court reporting profession while working as a receptionist in the emergency room. She said that she and the daughter of a patient she was registering started up a conversation which led to the daughter sharing that she was in court reporting school.

As for future student webinars, Mar said she would like to see covered networking, software, CART/captioning avenues, self-care, and what first year reporters will likely encounter.

“I am an older student (40+), and I would love to hear from court reporters who started this career later in life and what their journey was like, or even hear from people who didn’t make it through school as fast as their classmates, but persevered and made it through. I also would love to hear more about CART and captioning,” said Spear about topics for future student webinars.

Spear noted that she learned about the profession while attending a benefit concert for the deaf and hard-of-hearing community in 2017. “There was a booth set up by local court reporters who were talking about providing CART services. They had a brochure about court reporting that sounded just like me: ‘Do you play an instrument? Do you speak a foreign language?’ etc…. I was surprised my name wasn’t on the brochure,” she said.

“I had been looking for a career since my kids were getting older. I knew instantly that I wanted to be a court reporter. I enrolled in school the next week.”

To register for the first student quarterly webinar, visit the NCRA Learning Center. Registration closes Oct. 27 at 12 noon Eastern. We are expecting a short period of downtime for maintenance on the morning of Oct. 26, so please register as soon as possible.