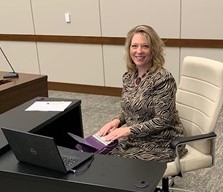 National Adoption Day is a collective effort to raise awareness of the more than 120,000 children waiting to be adopted from foster care in the United States. It is an annual event that draws a number of NCRA members to lend their time and use their skills to capture the proceedings and create an official record. NCRA Secretary-Treasurer Cindy L. Isaacsen, RPR, from Shawnee, Kan., an official court reporter for the 10th Judicial District Court in Olathe, volunteered her time to do just that during this year’s National Adoption Day held at her courthouse in November.

The JCR Weekly reached out to Isaacsen to learn more about her involvement in this event, what motivates her to take part, and why it is so important to so many people.

JCR | How did the opportunity to participate in National Adoption Day at your courthouse come about?

CI | When I started at the courthouse in 2008, I was assigned to the Child in Need of Care court.

JCR | Is this the first time you have participated in this event?

CI | This is about the fifth or sixth time I have participated in this annual event. Last year it was suspended due to COVID-19, but it’s been a big deal every year since I’ve been here. News media comes and they usually send balloons off (except now it’s apparently bad for the environment).

JCR | What inspired you to participate?

CI | I was “voluntold” the first year, and I was hooked. Seeing these kids being adopted into their forever family is the best thing that can happen at this courthouse. My dad came with me one year, and he was full of joy and still talks about it to this day. He is a big cowboy from Texas, and tears were rolling down his cheeks with every adoption. We keep lots of tissues close by – my mask helped disguise my emotional face this year.

JCR | What was your role in this event?

CI | I take a record of every adoption proceeding and produce a transcript so the family will have it. It’s at no cost to the family; the county picks up the costs associated with any transcripts. This year we had 12 families and about 16 kids who were adopted during this special day.

JCR | What was most gratifying to you personally and professionally in taking part in this?

CI | We are the guardians of the record, and a lot of the hearings I take in criminal and civil court are extremely sad and emotionally exhausting. I just took a shaken baby case, and my heart was just broken from it all. But this hearing is the most exciting time for me, the judge, staff, and mostly the families. There’s lots of laughter and happy tears. Judge Kathleen Sloan is the judge who I used to work with, and she was one of the judges there for this event. We have a second judge who was also participating, Judge Erica Schoenig. Their administrative assistants were also present to manage the paperwork, etc. The judges tell the families: “This is the best hearing in the courthouse, this is the best hearing in the State of Kansas, and this is the best hearing in the entire United States.” We end every hearing with a standing ovation for the family and child.

We had a representative from the clerk’s office who was able to file the documents as soon as the hearings were over, so the adoptions were valid immediately. Down in the common area we had a representative from the library signing families and their kids up for a library card. There were snacks, games, and books. Every child who was adopted had a basket with their name on it filled with lots of cool goodies. And every child who came was able to go and pick out a book or a stuffed animal that the judge keeps on hand for these occasions.

JCR | What would you say to others to encourage them to participate in these types of events if they have the opportunity to?

CI | This is one of the only opportunities to see the good – see the good in people who open their hearts and their homes to give a child a place to grow, a family to love and who loves them. It was about five hours of my Saturday. We can spend a lot of time taking and making things about us, but when you can give some of your time to be a part of a proceeding like this, it’s worth every minute that I gave.

Oh, and every child received a copy of the Dr. Seuss book Oh, the Places You’ll Go! with the Starfish story in the inside of it. (If you haven’t read it, it’s very sweet). The judges wrote a note in every book for each adoptee. They took tons of pictures, and they had a line on the decree of adoption for the kiddo to either sign if they could write their names, or draw a picture – so they see that they are a part of the process too and that their wants/desires matter.

It’s so cool. Makes my heart so happy. I’m literally exhausted at the end of the day … but happy!

National Adoption Day was established in 2002. The founding and driving force behind the annual event is a coalition of national partners that includes the Dave Thomas Foundation for Adoption, the Congressional Coalition on Adoption Institute, the Alliance for Children’s Rights, and the Children’s Action Network.

The first National Adoption Day event was held in November 2000 when nine cities were encouraged to open their courts on or around the Saturday before Thanksgiving to finalize and celebrate adoptions from foster care. To date, National Adoption Day has been held in 400 cities across the nation and has helped more than 75,000 children in foster care become members of a forever home.

NCRA Director Cindy Isaacsen, RPR, can be reached at Cindy.Isaacsen@jocogov.org.

The JCR would love to hear from you! Have you covered a happy, heartwarming, or uplifting event? Let us know so that we can include you in an upcoming story. Email us at pr@ncra.org.

Published in Features, Members in Action and News