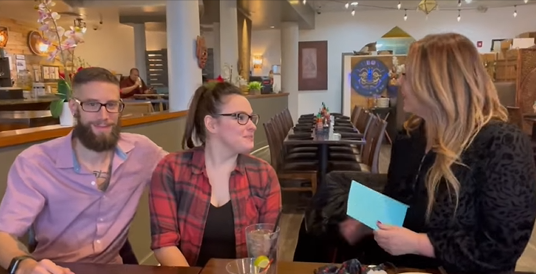 Alisha Conley with her husband and Jennifer Billstein-Miller

When Alisha Conley was invited to lunch by two of her mentors, she was thrilled. “I had just graduated court reporting school,” said Conley, “and Jen and Doug invited me to lunch to celebrate.” But Jennifer Billstein-Miller, RMR, CRR, a freelancer in Mantua, N.J., and Doug Zweizig, RDR, CRR, an official and captioner in Glen Mills, Pa., had a surprise for her. “I didn’t think anything of it and thought we were literally just going for lunch. Halfway through lunch they told me that they had posted on social media to help raise money for the start of my career.”

Conley lives in Claymont, Del., and recently graduated from Tulsa Community College in Tulsa, Okla. She is in a practice group with Billstein-Miller and Zweizig and had initially reached out to them for advice on how to pass her last 225 tests in school. “She worked so hard,” said Billstein-Miller, “did what we said, and she passed!” Later, Conley was able to intern with Zweizig in person and sit with Billstein-Miller on some difficult virtual depositions. “She never gave up,” added Billstein-Miller, “even when suffering with COVID.”

It was due to this dedication, hard work, and passion that the pair of veteran reporters decided to raise money to help Conley get started on her career. They wanted her to be able to purchase the equipment and software she would need to hit the ground running as a new reporter. It was a complete surprise to Conley. “They had so many people donate that it was $5,100!” she said. “They gave me the card at lunch that day and told me the amount was written in the card. I never ever would have guessed the amount and cried tears of happiness and gratitude.”

“I still cannot believe it,” Conley added. “There were so many wonderful people that signed a virtual card for me too, as well as the original posts that Jen and Doug posted. It was absolutely phenomenal! Without their help, I would have not been able to transition from a student to a professional reporter the way I did. I feel extremely lucky, and I am forever grateful and cannot wait to give back to future students too as a working reporter.”

Court reporting is a second career for Conley. She started competing in British figure staking championships in her early teens and at 18 years old began traveling the world with Disney on Ice. Read about her journey here.

Published in Career, Getting Through School, News and Student