Margary Rogers had an idea 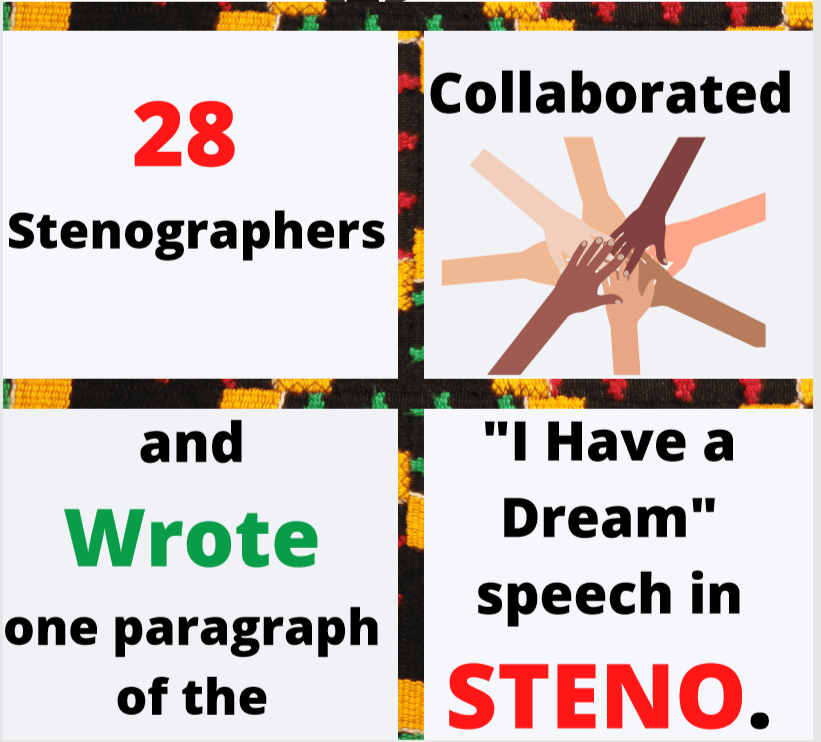 Margary Rogers, RPR, CRI, an official court reporter and CART provider from Washington, D.C., was trying to fall asleep on the evening of January 15 when she had an idea.

“My mind was racing with excitement and logistics. The idea was to write the ‘I Have a Dream’ speech in steno in honor of Black History Month, Court Reporting & Captioning Week, and one of the greatest leaders in the nation’s history, Dr. Martin Luther King, Jr.,” said Rogers, who has been a court reporter for 21 years.

A graduate of Johnson & Wales University, Rogers holds a Bachelor of Science degree in court reporting and an Associate of Science degree as a legal assistant with a concentration in psychology. She learned about court reporting as a young teenager when watching The People’s Court on television. “This career is godsent, not just for earning a lucrative income, but to also spread love, joy, and serve the justice system, legal clients, the deaf and hard-of-hearing community, and anyone else who needs our services to provide a verbatim record of the spoken word,” she said.

The JCR recently reached out to Rogers to learn more about her idea and how she was able to make it happen.

JCR | How did the idea for this collaborative project come about?

MR | I started to think, what if I was able to get other court reporters to write portions of the speech with me? Is there a transcript of the ‘I Have a Dream’ speech online? Is it broken down into paragraphs? Can I get 10 reporters to volunteer to write portions of the speech in steno? Wait. How would the reporters submit their steno notes to me? Would I be able to successfully download their steno notes, and would it appear in the same format as steno notes should be when the reporters upload it? Wait. How would I put it all together? How would the non-reporter understand/connect the steno notes to the actual English speech? There were so many thoughts racing through my mind.

I searched online for a transcript of Dr. King’s ‘I Have a Dream’ speech, and I found it on the National Public Radio (NPR) website. My first thought was to ask African American court reporters to participate, but then I started thinking about Dr. King and what he stood for, what his mission was: desegregation, unity, equality, diversity, and justice.

I begin to talk to Dr. King. I said, ‘What would you do if you were the leader of this project?’ He said, ‘I would have everyone participate in the project, no matter their color, creed, or religion.’ So that’s when I created a flyer and added the diverse circle of hands to convey the collaboration.

JCR | How did you encourage others to participate?

MR | At 5 a.m. on January 16, I texted about 40 court reporters, and I also posted on my personal Facebook page that I was seeking stenographers to volunteer to write one paragraph each of Dr. King’s ‘I Have a Dream’ speech in steno. I created a flyer and called the project the ‘Dr. Martin Luther King, Jr. “I Have a Dream” Speech Steno Project Collaborative.’ The flyer includes a picture of Dr. King and a graphic of a group of eight multicolored hands joined together to convey that this project is a collaborative and diverse project, that all reporters could participate, not just African American court reporters, because Dr. King would have it no other way. I also included a steno sample of the first sentence of the speech to show volunteers what I needed the format to look like.

Within minutes I received an overwhelming response. I am always amazed at how supportive my court reporter colleagues are when a not-so-normal idea comes to mind. Some reporters even requested to take on two paragraphs, but there were more volunteers than paragraphs, which was great. We even had our very own NCRA President Debbie Dibble, RDR, CRR, CRC, a freelance court reporter and captioner from Salt Lake City, Utah, volunteer.

Every reporter who volunteered received a paragraph number, and they all received the link to the same exact NPR transcript of the speech. I provided each volunteer the first and last three or four words of their assigned paragraph, to alleviate any confusion as to which paragraph they were to write.

JCR | How long did it take you to plan this from inception until completion?

I sent out the request to prospective court reporters on January 16 at 8 a.m., and every reporter sent their one steno paragraph to me by late morning the following day. I created the display for the paragraphs through an online graphics app. It took me about two weeks in between completing some daily and expedite transcript orders to complete the collaborative project. I would work on about three to five paragraphs a day, which would include font, size, and steno columns, and ensuring that I copied and pasted the writer’s correct outlines as they had written them. After I completed each paragraph, I sent it to the stenographer to review to be sure that everything was correct. Once they approved it, I moved on to the next paragraph. I had to make a few changes throughout the process, but the project was completed on February 1, the first day of Black History Month.

JCR | What was the greatest benefit for you tackling this project?

MR | Educating non-reporters about the profession of court reporting and showing them how relevant we are now and how exciting and versatile a career in court reporting can be. I was also able to share this project with students at career fairs during Court Reporting & Captioning Week, showing them how we write and what steno looks like. This project gave me the ability to relate court reporting to something they already knew about, like Dr. King and Black History Month. Also, I loved the excitement from educators like Ana Fatima Costa from California, who asked for a copy of the project so that she could share it with her students to show them the many ways in which stenographers write the same words, phrases, and brief forms differently.

JCR | You are planning to put together a booklet about this project. When will it be available for purchase, and what will it cover?

MR | The book will be available on March 17 for a cost of $25. All profits will go to the National Court Reporters Foundation (NCRF) to support the NCRF Carl Sauceda Grant. The booklet will include an intro as to how the project was created and a short write-up about Dr. King and his speech. It will also include all 28 paragraphs of the speech in steno and English from each stenographer and a small photo of the stenographer. The last pages will include a list of all volunteers, the website address for NCRA DiscoverSteno®, and a message stating where the profits from the booklet will go.

JCR | What advice would you give to others considering similar projects?

MR | First of all, this was a God idea, not a Margary idea. I was literally trying to go to sleep, but the idea kept me awake. I would say make sure it’s going to educate others (non-reporters), promote our profession, and be relatable and relevant at the time that you are planning to do the project. We have to be creative and think outside of the courtroom and the deposition room when we are marketing our skills and profession. Make sure to provide detailed instructions on what your volunteers are being asked to do and the deadlines. Patience is a must. Be patient with yourself and be patient with the volunteers. It may take a little longer organizing all the steno notes from 28 reporters exactly in the way you envisioned it. And make sure you thank and acknowledge everyone who helped you.

Others who participated in the “I Have a Dream” Steno Project Collaborative, in addition to Dibble, Lassiter-Benson, Salter, Wallace, and myself, included:

For more information about the project, contact Margary Rogers at mfrogers1@gmail.com.

Published in News and Volunteering