What does NCRA do for you? We advocate for you! 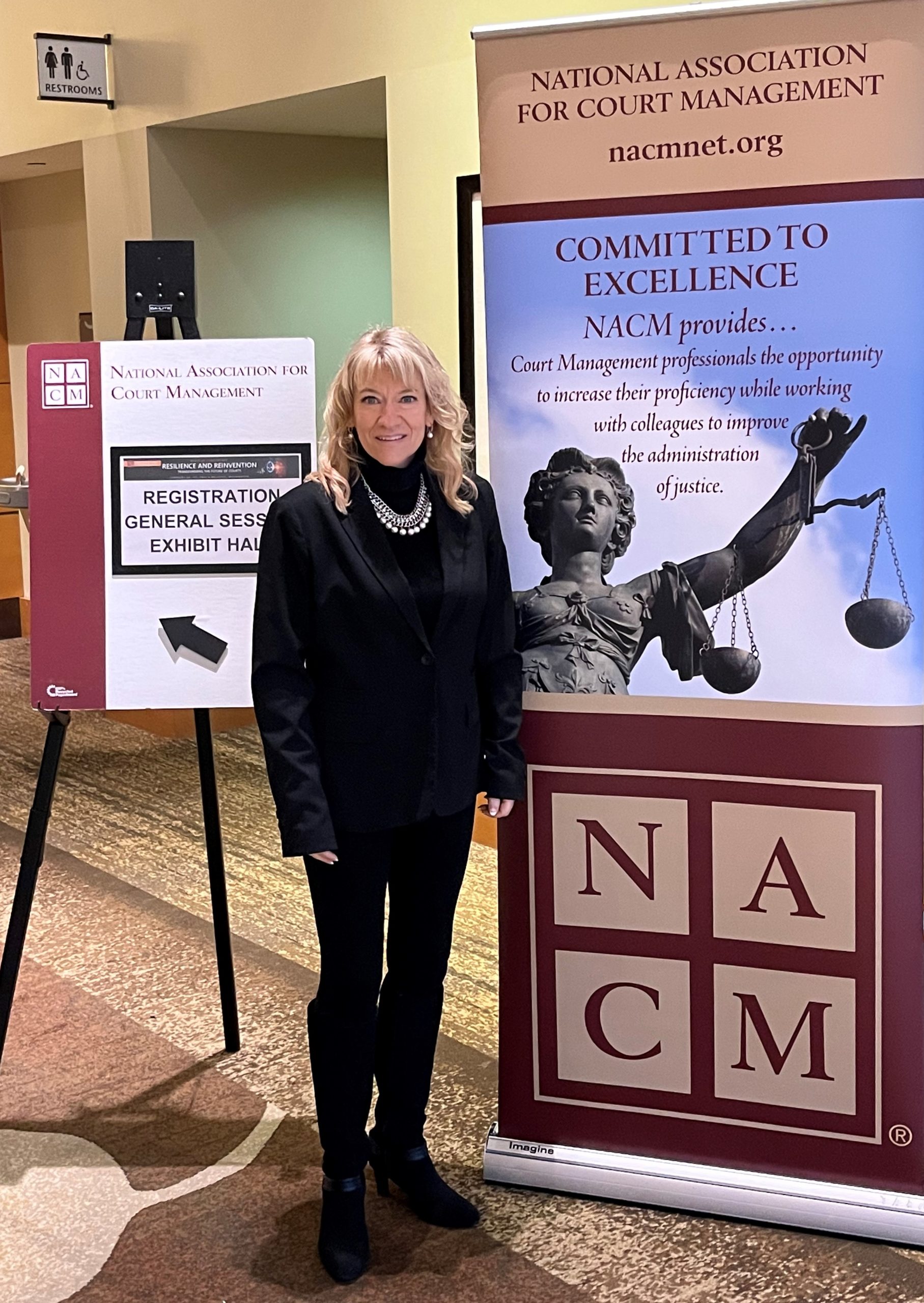 While it may have been cold and gloomy in the Seattle, Wash., area last weekend, in the midst of the area’s once-a-year snowfall the sun was shining brilliantly on NCRA.

Bellevue, Wash., hosted the National Association for Court Management (NACM) midyear convention. The audience was filled with judges and court administrators from across the country. To match the weather, I got a chilly reception as I entered the vendor hall and was approached by a gentleman who seemed to identify me as soon as I cleared the threshold. Initially I was flattered, but as we started talking, I soon came to learn that he was a transcription company vendor. That’s when the lightbulb came on above my head. He knew exactly who I was because he was there campaigning for our jobs and was checking out the competition. So many companies there had the same sales pitch: JAVS, Tyler Technologies, FTR, and several companies new to the scene. I looked around the room and contemplated how I would share our message and defend the stenographers and captioners of NCRA in this den of opposition. And once more into the fray I went.

The first day was rough, with little interaction and fewer opportunities, but then the floodgates opened. Because of scheduling conflicts, I had been unable to arrive in time to speak at the board meeting, but owing to my absence, every single NACM board member knew who I was and approached me, giving me the opportunity to have an extended one-on-one visit with most of them, give them the handout that I had prepared, and to explain our concerns and the value professional stenographers bring to the justice system. Many high-ranking officers of the National Center for State Courts (NCSC) were in attendance, and I was able to meet with them and get our information into their hands as well. A high note for me was an extraordinary conversation I had with the NCSC Director of Racial Justice, Equity, and Inclusion. As I talked to countless attendees, including judges, court administrators, and a supreme court justice, I made sure to convey the message that the record is too important to be left to chance and they should always employ a stenographic reporter.

While some may consider it stalking, another “fortuitous moment” materialized after the opening remarks were given by Steven C. Gonzalez, Chief Justice of the Washington Supreme Court. As he left the stage, he snuck out a side door, beside which I had strategically placed myself. With our NCRA brochure in hand, I slipped out behind him and had a 15-minute private audience with a supreme court justice.

Yet again the Washington clouds parted to allow the glorious sun to shine down on me when I randomly sat next to a woman at the announcement session on the second day of the convention. We exchanged names and a few pleasantries. When the meeting began, the NACM president announced the names of partners that had arrived for the convention. My lovely tablemate stood as her name was announced as the president of the American Judges Association (AJA). My heart nearly jumped out of my chest. I said to her, “You didn’t mention that little tidbit. We need to talk!” And talk we did. We spent the rest of the convention together, and she left with an acute understanding that stenographers are the answer to the safety and security of the records in our justice system. She committed to share our brochure with the entire membership of AJA and mentioned she was interested in having NCRA present to the AJA at an upcoming event.

I had one more thing to do

While that chance meeting was serendipitous, my ultimate goal for the weekend was to meet key NACM decision-makers and gain an understanding of who I needed to approach to open the door to NCRA being asked to present at their upcoming events. I was able to check that box off my to-do list as well, as I was able to meet with both the NACM and eCourts content creators. After hearing my spiel, they encouraged me to get them a proposal and said that they would consider our submission even though the deadline had passed. They gave me the name of the NCSC coordinator, and so I went on the hunt. I was staking out the vendor hall when a gentleman — who had been my convention buddy, making sure I knew where I needed to be and had a seat at lunch — approached me and said, “I hear you are looking for me.” He said he was looking forward to my submission for consideration at an upcoming NCSC conference. Indeed, these networking connections are invaluable.

Considering my trepidation when this convention started, by the time I boarded my flight home, the weekend had surpassed all my expectations. I could hardly believe the value that was squeezed out of a two-day event filled with seemingly pure coincidental interactions that turned into monumental opportunities.

You can help too

And now it is your turn to help. At NACM, I shared the two documents with almost everyone I met: the full advocacy piece and a bullet-point list for situations where a more direct approach is effective. We need you to read these and become familiar with the risks and exposures that alternative methods are creating in the justice system. We need you to educate yourself as to how and why stenographers are the solution. We will be sharing this information through every channel we have available, but our most effective resource is you. We need our members to get this information into the courthouses and law firms everywhere.

This was a weekend of unprecedented opportunities and value created for the NCRA membership. What does NCRA do for you? We advocate for you!

Debbie Dibble, RDR, CRR, CRC, is NCRA’s President and a freelance captioner and court reporter based in Salt Lake City, Utah. She can be reached at president@ncra.org.

Published in From NCRA's President, Industry Update, NCRA & You and News