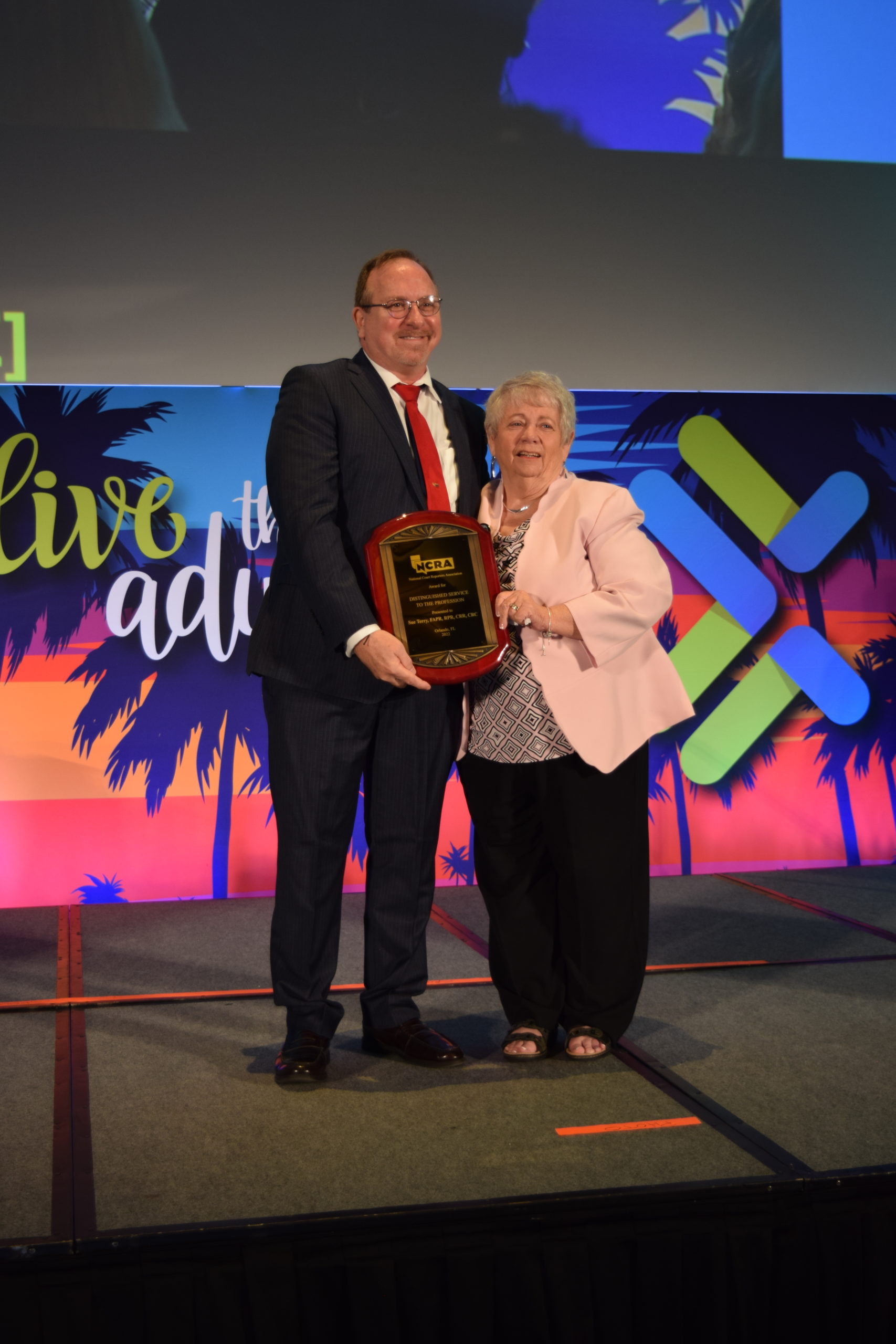 The NCRA DSA recognizes the distinguished work and service by an individual member for the benefit of the court reporting and captioning professions, including service to NCRA as a member, a committee member, a director, or an officer of the Association. Other displays of distinguished work include contributing to the JCR, the official membership magazine, service to a state or local court reporting association, or service in the field of public relations or public affairs. Award winners are nominated by their peers and are recognized each year at the NCRA Conference & Expo.

Terry began her court reporting career in 1975 after graduating from the Stenotype Institute of Springfield. During her career, she has worked as a high-volume freelance reporter covering all phases of the profession including deposition, arbitrations, court, convention, administrative hearings, public utility hearings, large environmental litigation, patent litigation, tobacco litigation, and medical and highly technical testimony for individual agencies nationwide. She has also worked as a broadcast captioner and as a Communications Access Realtime Translation (CART) provider.

Terry has also served as a trainer for various court reporting software and is an expert in realtime networking and troubleshooting, as well as providing wireless realtime transmission including streaming realtime.

Active at the national level, Terry is a past president of NCRA and has served as director and in all major leadership positions. She has served as board liaison to a number of NCRA committees as well as a member and chair to many. Among the committees she has chaired were the NCRA STRONG, Nominating, and DiscoverSteno committees. She has also served on the Finance, Communication & Outreach, and Technology Evaluation Committees. She also served on the TRAIN Task Force and has attended numerous NCRA sponsored events throughout her time as a member. She has also been a contributor to the JCR.

At the state level, Terry is a past president of the Ohio Court Reporters Association (OCRA). She has served on and chaired numerous OCRA committees, as well as presented to the membership at various events, led training sessions, written for the state membership publication, The Buckeye Record, served as a student mentor, and an overall sounding board for members. She also served as president of the StenoCAT Users Group and has received both that group’s and the OCRA Distinguished Service Award.

She has also served on committees for Gigatron Software Corporation, LiveNote for the Thompson West Corporation, and the Clark State College of Court Reporting. Her extensive experience as a presenter includes speaking before court reporters and captioners at the state and local association level, as well as the Ohio Supreme Court.

“One thing that I have noticed about Sue is that she is always ready to selflessly help in just about any circumstance that arises,” said NCRA member Rich Germosen, RDR, CRR, a freelance court reporter and agency owner from North Brunswick, N.J., in his letter nominating Terry for the DSA.

“She is such a great advocate for our profession,” he added.

“There is no better person than Sue Terry to receive the NCRA Distinguished Service Award, as she is someone who has not only seen our profession morph into the powerhouse it is today, but she also helped make those changes over many decades,” added Donna J Karoscik, FAPR, RDR, CRR, CRC, a freelance court reporter, captioner, and agency owner from Pickerington, Ohio.

“We Ohioans are proud to call her one of us, and we stenographers are as well,” she added.