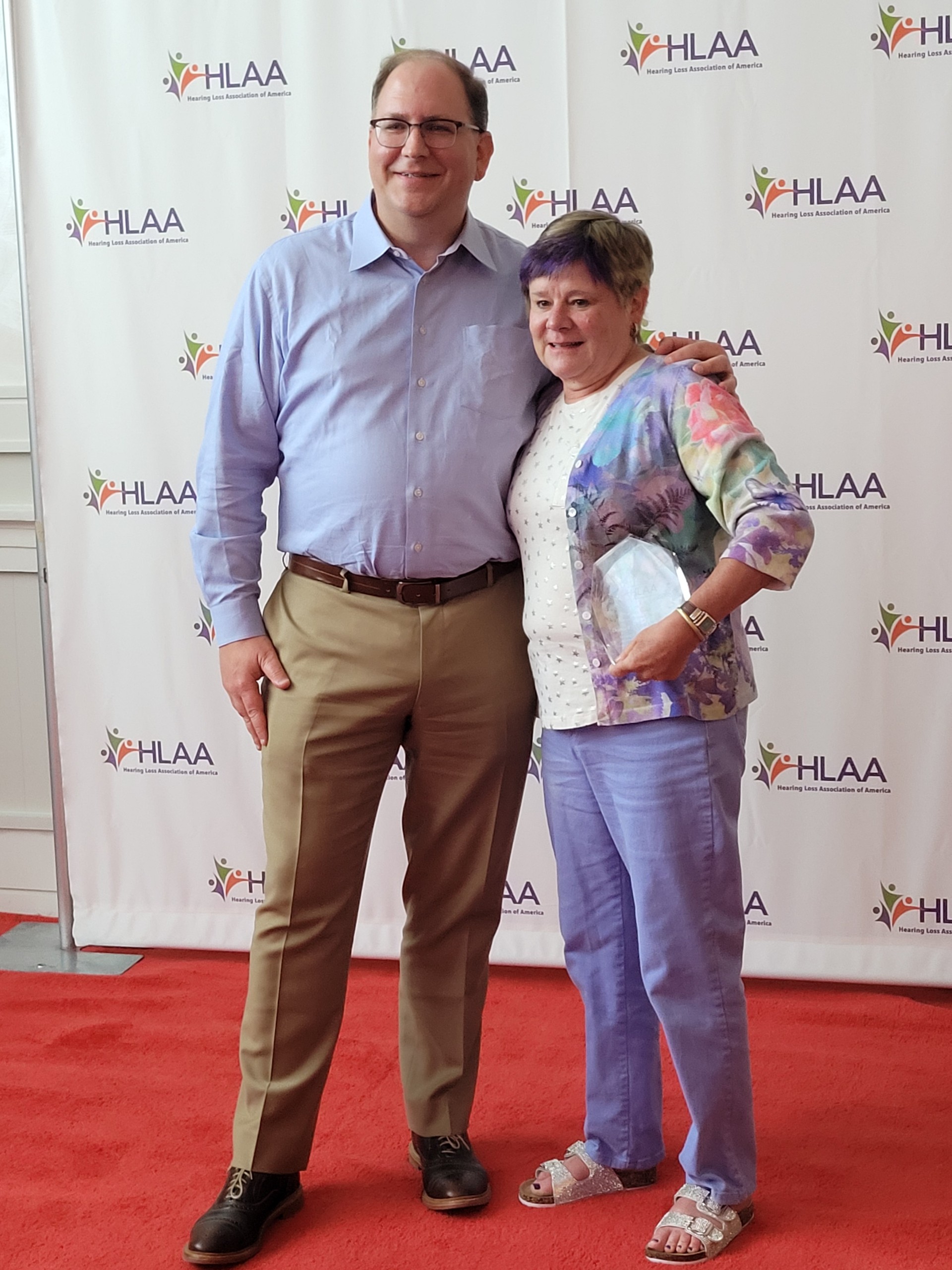 Deanna Baker with Michael Meyer, nephew of Rocky Stone, founder of HLAA and a member of the Board of Directors

The Hearing Loss Association of America (HLAA) honored one of its own at its national convention in Tampa, Fla., this past June for her extraordinary contributions toward the furtherance of the objectives and personal exemplification of the philosophy envisioned by HLAA’s Founder, Rocky Stone.

Deanna Baker, FAPR, RMR, from Flagstaff, Ariz., served on the HLAA Board from 2000 to 2004, but her commitment to communication access started years before that.

In the early 1990s, Baker was demonstrating computer-assisted realtime transcription, also known as CART, for the first time to a meeting of deaf and hard-of-hearing people in Seattle, Wash. She did this on her early-model amber Toshiba notebook-type computer that they said was portable — but you needed two hands and strong legs to carry it around. She made a strong case for how CART could open the world of communication to people with hearing loss. Captioning was not just for TV anymore. At that meeting in Seattle, she met an HLAA member who saw Baker as a pioneer who wanted to give people with hearing loss the kind of access they enjoyed on TV.

Baker’s knowledge plus her tenacity to push her profession of court reporting to “work outside the box” paved the way for how we enjoy realtime captioning today in many settings.

Baker continued to volunteer her time and talents to HLAA chapters and then became the CART captioner coordinator for HLAA after attending a convention in 1993 — and that was the beginning of Baker’s 25-plus years of history with HLAA. Baker coordinated all the captioning for all the HLAA conventions. She brought the best court reporters together, and later captioners, to perfect the kind of access that she knew would improve hearing access.

Without Baker’s leadership, HLAA’s conventions would not have earned their reputation of excellence for access.

As technology matured, so did Baker. She not only convened the most talented CART reporters, but she also kept pace with the technology, using state-of-the-art technology and applications. When new captioning technology became available — and some she helped design — she ensured that HLAA used them at the conventions and HLAA webinars. 1CapApp and 1Fuzion are examples of applications used every year at HLAA’s conventions.

Baker serves in the volunteer role as HLAA’s adviser for captioning.

She has always been a leader in her professional association, the National Court Reporters Association, educating court reporters and captioners how they can provide CART for communication access.

She’s spent her career advocating for quality captions. Baker has always been spreading the word about HLAA and encouraging her profession to get involved and improve quality. She has been a loyal supporter of HLAA, which has been proven in her hours of volunteer service to make the conventions communication accessible. There is nothing Baker won’t do to be sure that attendees have the best in hearing access. Baker is a humanitarian, Rocky Stone style.

Soon after she married her husband, Scott Smith, who proposed on stage at the Baltimore convention, Scott began accompanying Baker to the conventions. Inspired by Baker, no doubt, he worked with the tech team and volunteered as an on-call EMT.

Her example of using her talents for the greater good and her laughter and enthusiasm are contagious. She is passionate about her work providing access to people with hearing loss and supporting HLAA’s mission and growth.

Baker’s work spans the globe. She has captioned the Olympic Games, major news programs, popular TV shows, professional sports, and more, yet she has carved out a place in her heart for HLAA and gives generously of her time and talents.

Baker changed the landscape of access with CART. Literally thousands of people who have attended HLAA conventions over the years can all shout a collective “Thank you!”

Lisa Johnston, RMR, CRR, CRC, a captioner based in Melbourne, Fla., can be reached at lisaprovidingcart@gmail.com.