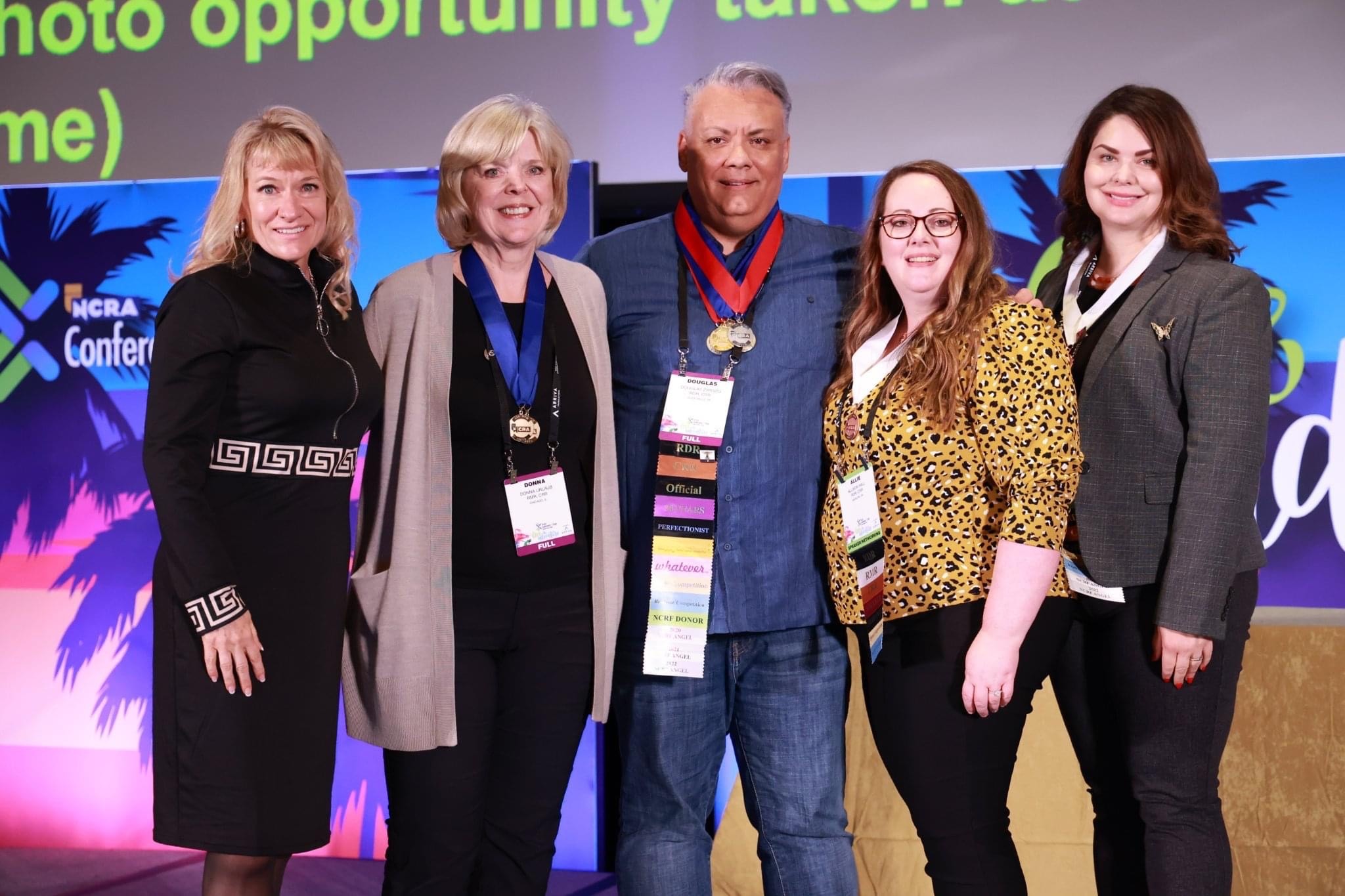 JCR | How did you find out about court reporting?

DZ | I’m from a small town in Pennsylvania and saw an ad for my school in the local paper. I still knew nothing about court reporting. When I went to talk to them, since they had several different majors, I had a travel brochure and a court reporting brochure in front of me. I thought court reporting sounded interesting. As an aside, years later my teachers told me they didn’t expect me to even get out of theory. I wasn’t the only one they thought that of, of course, but I shocked them all.

JCR | What was your greatest challenge as a student? How did you overcome it?

DZ | I will tell you, my school – at the time Central Pennsylvania Business School, now Central Penn College – had the toughest court reporting program around. When I enrolled, I knew no better. I knew there was a school closer to me, but I wanted to stay with the school that I thought would push me. We had to pass almost all steno tests at 99%. When we passed 225s, we had to go for higher speeds – 240, 260, 280. I guess the challenge to me was really forcing myself to take it seriously and put in all the work, which was a lot. Mandatory steno every night, weekend, semester break. My teachers were as no-nonsense as they come, and I love them all for pushing me hard when I needed it.

JCR | Throughout your career, what tips or tricks have helped you the most?

DZ | I would say getting up the nerve to interrupt when I had to. That was very difficult for me as a new reporter. I still find it difficult sometimes, but I do it pretty much without thinking. Whether court or freelance, keep your eye on your schedule. Things cancel all the time, and sometimes an agency might forget to notify you. The sooner you know that the easier it’ll be to book something else if that’s what you want. Conventions are an EXCELLENT way to network. Have your business cards handy to give out.

JCR | What wisdom would you share with the next generation of court reporters?

DZ | Well, I’d start with learning your theory really, really well. Go back and review it even. My theory is, I’m told, one of the most stroke-intensive out there, but I wouldn’t change it if I could. I have shortened a lot over the years and will likely shorten more since I’m not getting any younger. Also, there was no such thing as social media when I went to school, but I’ve seen students and court reporters all too often get caught in a trap of sharing/complaining about too much on social media (I may resemble that remark, but I try not to). Talk to your teachers, classmates, and/or a mentor you trust. I just think that social media can often fuel too much negativity. I’ll just say that over the past few years working so much with students, most are just awesome, ask great questions, and work hard, but a few don’t seem to take advice well. When you are combative and rude on social media posts, just realize that future prospective employers may be seeing that. People remember names and they also chat. I think some people had to learn this the hard way, unfortunately. And lastly, remember you are going to be learning once you’re out of school as well. I’ve been doing this for over 30 years and still learn something new almost every day. It never stops.

JCR | You earned various awards at Conference this year. What or who do you credit for getting you there?

DZ | Certainly, my teachers played a huge role and gave me a very solid foundation to start out with. Also, I started out with a great agency in Philadelphia, Foster Court Reporting. I will never forget the owner, Madalene, sitting down beside me and watching me scope. She’d stop me and tell me to define my misstrokes, when possible. Something like, “If it can be nothing else, define it because you’ll misstroke it again.” To say that sage advice has served me well over all these years is an understatement. What most don’t know is that my main dictionary is FULL OF MISSTROKES! Seriously, full of them. I am convinced that if I hadn’t followed her advice that I wouldn’t be the writer I am. Also, we didn’t use audio except on a video dep. This taught me I had to get it and not be lazy. My mother, who passed away in 2014, was always a huge believer in me even when I wasn’t, so I credit her for sticking by me and always encouraging and supporting me 100 percent.

JCR | What does the future of court reporting look like to you? What should people be doing or paying attention to?

DZ | I’ll tell you, I’ve done a great deal of work with students over the years, and especially since the pandemic started. I’ve slowed down on that a bit for now. Anyway, I’ve met some of the most promising, hardworking students, and it really gives me so much hope for the future. When I started school and throughout my career, I’ve been told “Oh, why can’t they just record that? That would be so much easier.” These folks just don’t know the nuances of taking down and transcribing the spoken word that I do. There is so much more to it than just pushing a button. So much more. I listen to speakers and try to punctuate accordingly as I’m writing to convey the meaning they intend. I can also interrupt for clarity. I can’t tell you how many times since the pandemic and remote proceedings started in a big way that someone got cut off, so when they rejoin, I’ll often read them back the last thing they said almost right away. Anyway, when people keep saying that digital can do what we can do, take it with a big teaspoon of salt.

JCR | How has being a member of NCRA helped you?

DZ | In many ways. One story that comes to mind is the way in which I started to compete. In 2005, the NCRA Midyear Conference was held where I lived, in Philadelphia. They asked a co-worker of mine to report something for them and provide a transcript. She wasn’t available and referred them to me. So, I reported a seminar which I transcribed. I also realtimed a session where one of my judges was speaking. Lastly, I reported the state association’s Business Meeting. Phew. Anyway, I did it on a volunteer basis for NCRA, so instead of paying me, they comped my registration to the NCRA Convention & Expo later that year in Phoenix. It was my very first national convention. I still had to pay for airfare, hotel, contest registration. Speaking of which, that is what prompted me to enter the National Realtime Contest! I placed third overall on my first try. If not for that chain of events, I very much doubt I would have started competing nationally.

JCR | Will you be competing at Conference next year in Houston?

DZ | As I’ve been telling friends, I am taking a well-deserved break from contests for at least a few years plus. My ultimate goal was to win the Speed Contest one time and then I always said I’d “retire.” Wow, I still can’t believe I won both (and they were both close contests with many talented writers). As an aside to that, just prior to the Speed Contest, I was in my room, reached into my toiletry bag, and somehow I cut my right thumb. I won’t bore you with details, but I couldn’t stop the bleeding. I finally did, minutes before the dictation. I still have a tiny scar which I hope will go away soon. Anyway, winning both was a dream I never thought I’d achieve. I enjoy contests and have made great friends of many of the contestants. But when you win once, twice, however many times, people expect you to always win. I put great pressure on myself as well. I am looking forward to not having that pressure again anytime soon and wish my friends luck. You might see me in the future.

JCR | How did it feel to be on stage numerous times in Orlando to accept your various awards?

DZ | I’ve been doing that for years now. I usually have tunnel vision. My very first NCRA contest was the Realtime Contest in 2005. I kind of thought I might have done well, so I didn’t go to the Awards Luncheon. I ended up winning third overall my first try, so I regret not being there. Anyway, for this year and many, you could call it stunned disbelief. No matter how well you think you’ve done, you can never judge how well others did. I was a dark horse back in 2005. Even when I won in 2006, people didn’t know who I was. You never know who’s lurking out there, afraid to enter like I was, and they could blow everyone away! Seeing people earning medals for the first time is ALWAYS a pure joy to watch (my good friend Kathryn Thomas comes to mind!)