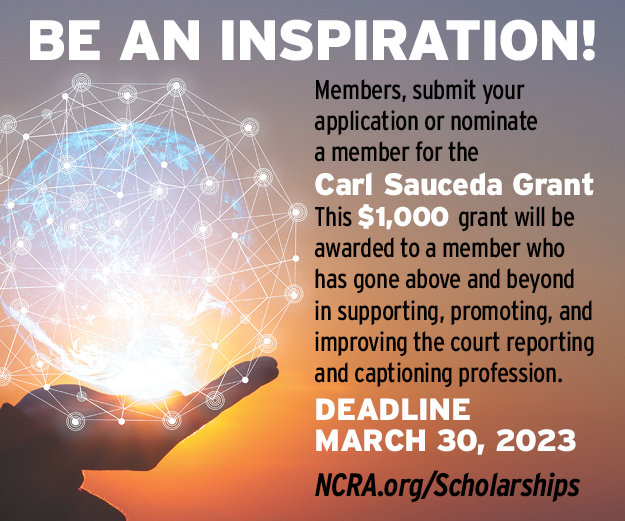 Martin Luther King, Jr. Day, Jan. 16, marked the opening of NCRF’s second annual NCRF Carl Sauceda Grant. The window to apply or nominate a colleague is open through March 30. The $1,000 grant will be awarded to an NCRA member who is a court reporter or captioner and who has shared his or her knowledge by helping to build a mentoring network, assisting others to advance their skills, or providing a comparable learning activity.

The grant is named in honor of Carl Sauceda, FAPR, RMR (Ret.), of Hayward, Calif. Sauceda was elected to serve as NCRA President from 1999 to 2000, but his legacy of giving back to others carries on today. The grant’s purpose is to recognize those who have influenced the lives of rising court reporters. “[Receiving this grant] will be an honor for the recipient to continue to promote and support the profession,” said Sauceda.

NCRF’s inaugural grant was awarded to Margary Rogers, RPR, CRI, a court reporter and CART provider from Washington, D.C. To mark the 2022 national Court Reporting & Captioning Week, she organized a virtual transcribe-a-thon in conjunction with the Smithsonian Transcription Center and staff from the National Museum of African American History and Culture in Washington, D.C., to help with the museum’s ongoing effort to transcribe more than 1.5 million original documents from the post–Civil War era that are housed in the Freedmen’s Bureau Records. The documents include letters from slaves from centuries ago. Rogers also helped organize a second transcribe-a-thon during NCRA’s 2022 Conference & Expo held in Orlando, Fla. A third transcribe-a-thon is scheduled for the 2023 Court Reporting & Captioning Week.

She is also credited with organizing volunteers to write Martin Luther King, Jr.’s “I Have a Dream” speech in steno in honor of Black History Month, spearheading the launch of a month-long membership campaign as chair of NCRA’s Membership Committee, and starting the “Steno Fitness Challenge” which challenged members to exercise at least 15 minutes per day to get fit before NCRA’s Annual Conference & Expo.

Members may apply or nominate a fellow member. Eligibility criteria include:

Sauceda shared his thoughts on being honored with a grant in his name in the February 2022 issue of the Journal of Court Reporting.

Published in NCRF and News