TECHNOLOGY: The benefits of early adoption 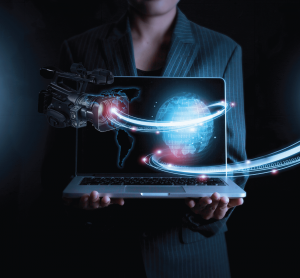 Because concentration is paramount for their job, court reporters don’t like disruptions — and that often extends to the equipment and other technology they use during work. Once reporters are comfortable with their writers and other gear, many are loathe not only to try to try new hardware, but often even to update some of the software that supports their equipment. This reliance on the tried and true can help a reporter stay in their comfort zone, but it also comes with a cost.

Foregoing the opportunity to be an early technology adopter means that at least some reporters may end up missing out on trends that can help them do their job better and also grow their business.

“There are so many great new tools now with reporting,” says Robin Nodland, RDR, CRR, a principal with LNS Court Reporting based in Portland, Ore. “From where it was when I started in 1980, it almost feels like we’re cheating now thanks to software that can, for example, remember complex medical terms, so if you write it two or three times, it will start to suggest it.” Though it does require both a financial investment and a willingness to learn the ins and outs of the latest hardware and technology, Nodland says being an early tech adopter has more than paid off by helping her firm generate new business.

“Being tech-savvy really resonates with our client base,” she explains. “Every single time we’ve given a five-minute tour of our technology to a client, they are beside themselves. It’s usually the assistants — the attorneys don’t want to deal with it — who are just delighted because it makes their job easier. If they go home and are not sure if they have scheduled a videographer for the next day, they can log in and double check.”

One of the main reasons LNS embraces new technology is because it now does a lot more than reporting and videography. “We are tech heavy because we have both court reporting and captioning and video conferencing over IP, so we need a real robust infrastructure,” Nodland says.

LNS has an IT person on monthly retainer to oversee and maintain the company’s servers and website. “We use ReporterBase for the calendaring, invoicing, and the repository with 24/7 access to transcripts — and it’s our IT person’s job is to makes sure it’s all running properly. He also makes sure there are backups to all our reporters’ notes and files, even though that’s really the reporters’ responsibility.”

Not every firm or individual reporter will have the resources to invest in an array of on-site servers, let alone hire a tech guy to manage it all.

But Sue Terry, RPR, CRR, an NCRA director and freelance reporter based in Dayton, Ohio, notes there are still cost-effective ways to be an early tech adopting reporter. Terry notes that even little things like upgrading laptops and home PCs to the new Microsoft Windows 10 operating system can make a huge difference.

“I know many reporters are afraid to make that switch for fear of messing up their laptop,” she explains. “But most of the upgrades are taking place on the software side, and many reporters don’t realize how powerful they can be and how effective they can be when streaming a deposition. Once you have your router in place, no matter what CAT system you’re on, it’s easier to get the hookup when all your software is up to date.”

Being an early tech adopter also requires reporters to understand what type of new tech can truly make a difference in their business.

Dianne Cromwell, RPR, is an official reporter in Boise, Idaho, as well as the owner of the Boise reporting firm Tucker & Associates. Cromwell says that virtually every reporter can help their business with relatively low-cost investments such iPads. “Compared with the old days when you had to deal with all different kinds of laptops and other repeaters, the iPad is much easier,” she says. “The freelancers that work for our company all have their own iPads, which they provide clients.”

Many small business owners — and not just those in the court reporting field — may understand the importance of staying on top of technology but often don’t know how to start that process.

Terry notes that people don’t have to be all that tech conversant to be early adopters; they just have to know the right people and ask the right questions.

“Many reporters buy a new laptop or other equipment, and the settings are not optimized for their job, which is the recording of proceedings,” Terry explains. “So they think they have a crappy laptop and they go out and buy another one.”

Asking other court reporters for advice is one way to get up to speed on new technology, but Terry says reporters also can’t be shy about asking the very people they’re buying the equipment from for their input. “These are professionals, and to me what they’re also selling me is support,” she says. “It really doesn’t do you any good to get a microphone that picks up the sound in a room great if you don’t know how to set the settings to make that happen.”

Most tech and software vendors say they want those questions from court reporters. Jason Yee, marketing director with OMTI, makers of the ReporterBase line of software, notes his company routinely handles queries from their hundreds of firm clients.

“We find their interest in new technology ranges from very conservative to eager early adopters,” he explains. “We view it as our job, as software developers, to be up on what is happening technology-wise and use our experience from 30 years of developing for this industry — plus insights from our clients — to decide which technologies to incorporate into ReporterBase. Then we teach our clients why they have these new abilities and what they can do with them.”

“We have found that often clients who describe themselves as not technically savvy will embrace these foreign new concepts and abilities when they understand the benefits and learn how to use the new features properly,” he adds.

Reporting technology for a rich future

The right technology can not only assist individual reporters and court reporting firms with their current work, it can also ready them for what could massive new opportunities over the next decade.

Jason Primuth, executive vice president for NextGen Reporting, points out that remote reporting — where the reporter is far from the witness being deposed — has not really taken off in many parts of the country.

“However, we’ve seen a strong growth in the demand for remote depositions where the parties are in multiple locations, and the court reporter is generally with the deponent,” he adds. “Forward-thinking corporations and insurance companies have found significant savings in time and money by conducting remote depositions.”

Primuth has also seen a surge in the use of video technology in legal proceedings, noting, “Some of our cases require the high-quality video that only traditional videographers and a professional camera can provide. But there’s a massively underserved market for video in smaller cases with smaller budgets. Other options, such as remote streaming, make video affordable to a much broader range of cases.”

“We’ve expanded dramatically,” she explains. “We now do promotional videos for attorneys to post on their websites, and we’re very active in the local bar associations here in Illinois where we’ve done things like ‘Women in the Legal World’ videos for them.”

Jensen adds video is already influencing many parts of civil litigation. For example, her company now works with law firms to put together day-in-the-life videos used in personal injury suits.

“If someone is injured, the attorneys often want the jury to know what it’s like to be in their shoes by showing their daily life,” she explains. “We’ve also just invested in our first GoPro camera, which can be put on the injured person to show directly what life is like from their side.”

As much as video is affecting litigation, the huge growth in video outside of the legal arena has been a real technological trigger for the court reporting industry along with the need to caption much of that content.

A report last year from Cisco’s Visual Networking Index predicted that 80 percent of all Internet traffic will be video by 2019.

Carol Studenmund, RDR, CRC, and co-founder (along with Nodland) of LNS Reporting in Portland, Ore., agrees that the surge in video, both online and off, could have a profound effect on the captioning community – but only for reporters willing to step outside their comfort zone.

Studenmund explains that over the past five years, captioning prices in the network television affiliate world have dropped, adding, “But I still see reporters who only want to do network affiliate news, and they’re willing to take less money to just do that. In the meantime, there’s all this new work.”

One area where Studenmund is seeing growth is areas affected by the Americans with Disabilities Act (ADA).

“The world of people with hearing disabilities are finally beginning to ask for what they’re allowed to have through ADA,” she says. “And it’s booming. One example is stadiums. How many stadiums now have to provide captions? Another is in the workplace as people are realizing that in order to participate in a workplace webinar, they need captions.”

If that’s not opportunity enough, consider the vast amounts of old videotape that could soon be converted to digital and posted online.

“There’s so much content, not just current videos being produced, but archived content from years back when they still had VHS,” Terry says. “These are sitting at colleges and universities, and they’re dying to make that content digital and searchable.”

In addition to possessing their traditional captioning skills, Terry says court reporters should start thinking and talking like early tech adopters when it comes to video.

“You have to explain to people looking to post videos to YouTube that most search engines can’t index that content unless it’s captioned and there are keywords to pull up,” she says. “We have so much video history right now that if I was just entering the business, I would be marketing video captioning as strongly as I would depositions and hearings. If you can learn to caption videos, you really have an unlimited market.”

The good news for court reporters looking to be on the cutting edge of video is that it doesn’t require that much new tech.

Studenmund, who does captioning at stadiums, including high-profile events like the Super Bowl, remotely from her home office, says other than a great high-speed Internet connection, all you really need are great earpieces.

“I indulge in nice headphones,” she adds. “When working remotely, it all comes down to hearing clearly.”

Like most early tech adopters, Studenmund says the real key is to embrace any new technology as an opportunity rather than distraction, adding, “Everything changes all the time, so you just need to be ready for that.”

David Ward is a journalist in Carrboro, N.C. Comments on this article can be sent to jcrfeedback@ncra.org.

This article was suggested by NCRA’s Technology Committee.